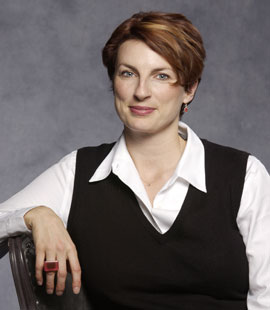 In today’s edition of Listen to This, I interviewed Alisa Palmer, who directed the production of British playwright Caryl Churchill’s landmark play Cloud 9, currently on stage at the Panasonic Theatre in Toronto. Cloud 9 is a hilarious satire on colonial-era notions about sex and gender, and how those ideas have crumbled over the years. The play touches on the fluidity of sexual orientation, gender, race, and family structure. Everything, it seems, including time itself, is up for reconsideration: the first act takes place in 19th century colonial Africa, and the second more than a hundred years later, though the characters only age 25 years. Women are played by men and vice versa; children by adults; and an African servant is played by a white actor.

When Cloud 9 debuted in 1979, these topics were more radical than they now seem to modern audiences, but the core of the play, a single bewildered family, each member trying to figure out their true desires and roles, is still sharp, vibrant, and very funny.