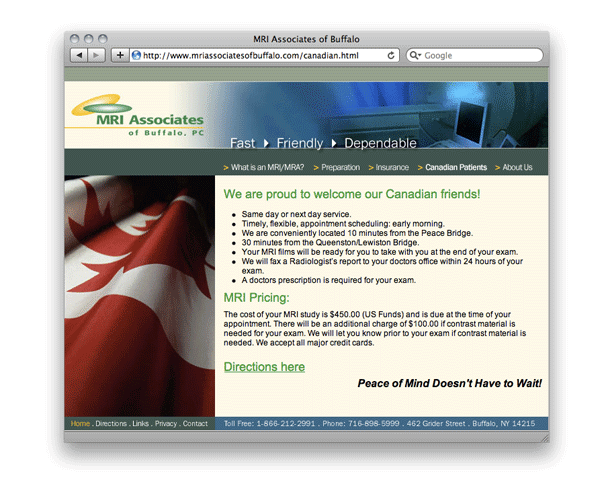 Website for MRI Associates of Buffalo, NY, welcoming their "Canadian Friends." Why are nationalism and health care are tightly bound in this country?

When we talk about health care, do we end up invoking nationalism above all else? In an editorial posted recently on The Mark, Herbert Emery, a professor of health economics at the University of Calgary, argued that our health care system isn’t going to evolve until we leave the idea of what is, and isn’t, Canadian, at the door. But the problem isn’t that, when faced with issues of a deteriorating health care system, we use our own nation as an excuse to do nothing. It’s not that an open and universal health care system is “Canadian” and that two tiered medical care or even fully-fledged private medical care is “Un-Canadian.” It is, quite simply, that paying for health care is wrong. That doesn’t have to mean that Canada’s current public health system is entirely right. Yes, we need to take a look at where we’re making mistakes. But the argument that nationalism is stifling our current debate system is shortsighted. Emery argues:

“Tying health care to nationalism not only promotes an inaccurate view of our health care system, it redirects debate away from a question Canadians need to address – what services should be included in the public system, and what could be left to the private market?”

In effect I agree with the first sentence – we shouldn’t be tying health care to our country at all. The right to live in good health is universal – one that extends beyond international borders. At the risk of singing Kumbaya too loudly, when I think about “health care” I think about people, not borders. It’s rare that I hear any of my peers discuss health care and the “Idea of Being Canadian” at once. I think most of us believe that every country should have universal health care, and that our own nation, even with its problems, is only a drop in the ocean of what needs to be done to bring good health to everyone. If having to pay for health care isn’t intrinsically wrong, you wouldn’t find people trying to hide it. In particular, you wouldn’t find our politicians trying to hide it. Danny Williams, the premier of Newfoundland and Labrador sought out heart surgery in the United States this week. If this was okay, Williams and his team would have never tried to dodge the issue when asked about it. Instead all we got were a few basic facts from his secretary and a slew of comments from elsewhere. Williams might feel that his choice to seek health care, at a price, in America is controversial. He has a lot of Canadians looking at him now, wondering why our care wasn’t good enough. But I doubt he sees his move as “Un-Canadian.” Because it isn’t. It might have been wrong, but if Williams felt that nationalism was part of his health, he would have found the care in Canada.