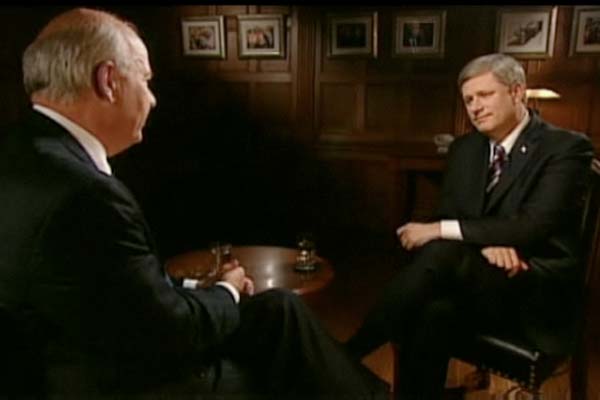 It’s been a week now since the Prime Minister’s December 30 announcement that the house of commons would be prorogued until March 3, 2010. Peter Mansbridge’s toothless interview with the Prime Minister last night (first question: the underwear bomber? Seriously?) was disappointing. Mansbridge didn’t challenge the PM on anything of substance, and used that favourite tactic of TV talking heads everywhere, lots of “some would say…” and “you can’t read a newspaper editorial without hearing…” — the kind of non-interview interview where every question is attributed to someone (anyone!) other than the actual person sitting there asking the questions. It’s a shame, because we really needed a champion here, in the only opportunity to directly ask the PM these tough, crucial questions before a national audience.

The response to prorogue over the last week has run, as Dorothy Parker said, the emotional gamut from A to B: what I’ve seen, from grand media poobahs and my circle of friends alike, is various flavours of indignation, outrage, disappointment, fury, wrath, ennui, disapproval, disgruntlement, vexation, exasperation, umbrage, chagrin, and despondency. At least, that’s among the people who actually care, which is only about half the country, according to one disheartening poll.

Heather Mallick’s New Year’s Day article in the Guardian seems to express the sentiment in its most distilled form:

Instantly, we are a part-time democracy, a shabby diminished place packed with angry voiceless citizens whose votes have been rendered meaningless. […] Rage and shame are flowing on the internet because there is nowhere else for voters to turn. Even The Globe and Mail, Canada’s national and excessively staid newspaper, had a front-page editorial steaming with reproach. The Globe often leaves me frustrated, but I was moved when I read it and … did what exactly? I took a stand. I joined a Facebook group called Canadians Against Proroguing Parliament, an earnestly pathetic act that may be part of the reason our nation is so lessened on the first day of 2010.

The reason that sentiment rings so true for me is that a widespread response to the prorogue seems to have been “We have to do something” with a streak of “but nothing I can do will be enough.” There are thousands of people who joined that Facebook group who also simultaneously doubt the ability of that group to truly accomplish anything.

It’s hard not to snicker at the fact that joining a Facebook group to show opposition to something has become the ultimate cliché. While such a group does raise awareness and cross over into mainstream media with front page headlines, I am not alone in wondering whether it actually accomplishes anything.

Even worse, why is the alternative to this kind of virtual action doing absolutely nothing? It’s as if it has already become such strong orthodoxy that if you don’t join, or even worse complain, you’re regarded as a nay-sayer and are also responsible for providing alternatives.

We want to do something, but there’s no consensus on what to do, so anything we do in the meantime—calling our MPs, joining a Facebook group, emailing the Governor General—gets devalued because it’s not the One Big Thing that’s going to fix everything. I recognize the feeling because I feel it myself, even as I know it to be self-defeating.