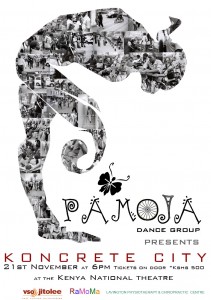 There’s a scene in the Kenyan dance company Pamoja‘s new ballet, Konkrete City, where all I could feel was the hectic beat of downtown Nairobi, or Vancouver, or Toronto. The dancers—most of them handicapped—depicted the Central Business District, Kenya’s core of business towers and banks, during the rainy season.

Walking, running and jumping; swinging arms, dreaded hair, legs and umbrellas, they moved to the unnerving beat of techno. The audience at the dusty National Theater of Kenya was so entranced that even the children in the front row, who are usually frightened by this type of music, could not tear their eyes away from the unbelievable shapes of the dancers.

Pamoja means “togetherness” in kiSwahili. Exemplifying that concept, the dancers use each others’ bodies to grace the stage— sometimes lasciviously. During one scene, a man pedals a Kenya-style wheelchair across the stage, while two other men, sitting behind him, roll on each others’ bodies, using necks, elbows and legs as support. 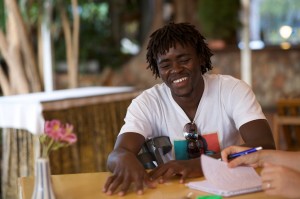 Dismas Otieno, one of the members of Nairobi's Pamoja dance company. Photo by Siena Anstis.

Dismas Otieno, 24, is a long-time dancer with Pamoja. He lost his leg at the age of four when he fell off his bike and into the lethal path of a “flying coffin,” a popular nickname for the big East African buses that roar past you with little regard for human life.

His parents, aware of the new difficulties their son would face, ensured that Otieno completed both primary and secondary schools at institutions for the handicapped. Eventually, as his interest in sports grew during his school years, he moved to Nairobi to pursue this passion.

Overcoming the challenges of living as a physically impaired person in a place like Kenya, notoriously unfriendly to the disabled, Otieno is a national swimming champion and is on the national swimming and basketball teams. He also dances full-time with Pamoja. “I don’t see myself walking on crutches,” he tells me, “I consumed and accepted the situation when I was young.” When dancing, he sometimes spends over two hours on his one leg without a break.

While Dismas is well-adjusted to his situation, he admits that most Kenyans aren’t. “The government sees physically challenged people as a problem.”

In a city like Nairobi, being handicapped is not easy. There is limited wheelchair access in all buildings, elevators are often broken, buses and matatus (the popular van-type of transportation) rarely stop for people in wheelchairs. Being handicapped in Nairobi means relying on the goodness of people with their own problems who are mostly looking out for themselves.

In an attempt to change this attitude, Pamoja has made itself a popular local dance group. Performing at big cultural centers like the Alliance Francaise, as well as in remote communities, where there is even less support structures for the disabled, Pamoja, through its contemporary dance work, helps to convince individuals that there is power and possibility within even the most physically challenged body.

The Kenya Working Group, operating under the University of Toronto, supports people with disabilities in Kenya. You can consult their website here.