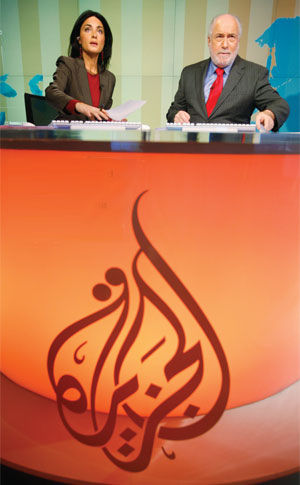 In late 1996, in a tiny peninsular emirate on the Persian Gulf with a total surface area barely larger than Toronto and Montreal combined, an experiment began. At the invitation of Qatar’s head of state, a small group of former BBC Arabic journalists relocated to the capital, Doha. They had been left jobless when their London-based employer’s Arabic station folded (due to an editorial scuffle with its Saudi funders), and they needed work. This group of journalists became the nucleus and precursor of what was to become the most ambitious and costliest single broadcast project in history—the Al Jazeera television network.

When it first began, few outside the Arab world noticed the daring and confrontational newcomer to the regional satellite scene. The station drew the attention of viewers because of its explicit and overt criticism of power in the region and its tackling of taboo issues—from government corruption and lack of democratic institutions to women’s rights and homosexuality. Al Jazeera carved a niche for itself and gathered a loyal following for its incisive coverage, volatile debate shows, and extensive investigative reporting.

Now, more than a decade since Al Jazeera’s inception, Canada can no longer afford to shun the world’s first truly global news network—especially one that is both steered and shaped by Canada’s best and brightest.

Undoubtedly, Al Jazeera has generated plenty of debate and controversy. Glorified and vilified in equal measure, it has been described as “radical” and “extremist” by its detractors and as a much-needed “alternative” medium by its admirers. But regardless of leaning and intent, most commentators acknowledge that Al Jazeera represents an important phenomenon in the Arab media.

In North America, Al Jazeera is a household name in part due to its unfettered, and sometimes exclusive, access to key news events, including the early days of the U.S.led wars in Afghanistan in 2001 and Iraq in 2003, as well as its status as the destination of choice for videos from Al Qaeda leaders Osama bin Laden and Ayman El-Zawahiri.

More recently, Al Jazeera was the only global network on the ground in Gaza during the Israeli military attack on the strip between December 2008 and January 2009. It was during these periods that the station solidified its reputation as the go-to source of “alternative” news for the Western media organizations.

Yet, as Al Jazeera’s English-language station (AJE) makes significant strides internationally, beaming into more than 140 million households in at least 100 countries, it remains under blackout in North America.The network’s inability to secure cable providers in the U.S., and the highly politicized battles to undermine its effort for access across the continent, have left it embattled but not defeated. Instead, AJE built its headquarters for the Western hemisphere in Washington, D.C., and expanded its online video capability to reach American and Canadian audiences.

Al Jazeera has come close to broadcasting to Canadian homes before. In 2004, the CRTC reviewed the Arabic network for inclusion on Canadian cable service providers. The process unleashed a firestorm, with critics accusing it of anti-Semitism and hate speech. The station never went to air in Canada.

Two years later, AJE faced the same fate in the U.S. cable market—with the exception of two small providers in Toledo, Ohio, and Burlington, Vt. Burlington became the site of high-profile town-hall debates after the network withdrew from the deal due to viewer complaints, many of which accused Al Jazeera of being “anti-American.” But the city council eventually reinstated the network, saying it offered a unique “alternative” to American programming. It was considered a major victory for the network’s U.S. profile.

Of course, four years make all the difference. While the early battle to include Al Jazeera in the cable offerings pertained to the Arabic language station, which presumably appealed only to the Arabic speakers in Canada, today’s application by AJE targets the entire viewing audience of Canada. While the usual critics of the station are levelling the same accusations this time around, defenders argue AJE is a whole new network.

Of note is AJE’s list of employees, which reads like a who’s-who of international journalism. The station boasts the likes of Sir David Frost, who hosts a regular talk show; Riz Khan, formerly of CNN International and the BBC; Rageh Omar, formerly of BBC; and former U.S. Marine captain and public affairs officer Josh Rushing, author of the captivating autobiography Mission Al Jazeera.

The station is breaking through the blackout—its online video traffic increased by 600 percent during the first two weeks of 2009 (in part due to Al Jazeera’s exclusive access in Gaza), with 60 percent of these hits coming from the United States. In Canada, the CRTC is currently reviewing AJE’s application. Meanwhile, AJE launched its own campaign website, iwantaje.com, and made its coverage available free of charge online.

If approved, the network has committed to opening its first Canadian news bureau to bring Canadian news to a global audience— which would make it the only international news channel with a news bureau in Canada. Given the shrinking budget of the CBC, and Canada’s nearly invisible global media footprint, Al Jazeera English may be a golden opportunity for Canada to reach the world.