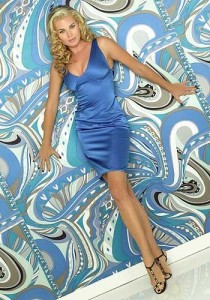 Only her plastic surgeon knows for sure. Image courtesy: ABC/Bob D'Amico

Has a transsexual ruined your life lately? Because if you believe what you see on TV, trans people are lurking everywhere, just waiting to pounce on unassuming heterosexuals.

Trans characters on TV are like those early depictions of gay men, before they started cropping up as every woman’s best-friend-slash-fashion-adviser. It’s depressing to argue that the amount of fleshing-out required to outfit such characters from a pool of stereotypes actually represents progress, but even by this measure trans characters have a long way to go.

The majority of trans people on television are male-to-female (meaning they were born as male but identify as female), and the dramatic crux is nearly always The Big Reveal: the moment when we realize that a beautiful woman was — gasp — formerly a dude. Inherent in this storyline is always the implication of deception, the idea that a trans woman is just a very well disguised lie that is bound to be found out eventually.

Take for example Alex Meade in Ugly Betty, whom everyone presumes dead until he shows up during Fashion Week transformed into the blonde and beautiful Alexis Meade. She then allows her own brother to hit on her before dramatically revealing her true identity in front of a room full of people. Myth #1: trans people don’t want to quietly get on with their lives; they want the entire world to pay rapt attention to their exciting new gender.

My favourite over-the-top trans character though is Ava Moore from the second season of Nip/Tuck. The disappointing thing about this storyline is that a trans character on a show about plastic surgery could have been truly groundbreaking. We could have been allowed to witness her entire transition, made to understand what she was feeling and why sexual reassignment surgery was necessary to her own personal happiness. Instead, we get the same tired old stuff.

Ava, who works as a life coach, is retained by plastic surgeon Sean to help his 17 year-old son Matt. But Matt and Ava spend a little too much time one-on-one and start sleeping together. The age difference has everyone on edge, and when Matt and Ava decide to run away together, Sean’s partner Christian threatens to kill Ava if she doesn’t break it off with Matt. Then, just to make his point, he rapes her — discovering in so doing that her vaginal canal is suspiciously shallow. Christian flees the scene, telling Sean and his wife that “Ava’s a man.” Myth #2: even when nothing male remains of her, a transsexual woman is still, somehow, a man.

For reasons that are never explained, Christian and Sean set to work trying to track down the plastic surgeon who performed Ava’s sex reassignment. Maybe that’s just what you do when you discover a transsexual in your midst: you try to find out where s/he came from.

Ava’s plastic surgeon reveals that Ava had first met him as Avery, a gay man who had fallen in love with him. But, being straight, the doctor could not return Avery’s love. So he agreed to transform him into a woman. Myth #3: being gay and being transgender are basically the same thing. Also, gay guys will do anything to make straight guys love them.

I swear, up until this point Nip/Tuck is not as hokey as the above episode implies. But introduce a trans character into a TV show and suddenly the whole thing becomes a Shakespearian farce.

Throughout the episode where all of this drama unfolds, Ava is repeatedly referred to as a medical marvel — as the “hope diamond” of transsexuals — because (Myth #3) trans women don’t usually pass so flawlessly. At the end of the episode, Matt is accepted back into the loving arms of his family—- who choose not to tell him about Ava’s past for fear of his being “sexually ruined for the rest of his life.” Ava skips town. Her secret is out, so obviously she can never work in Miami again.

Even The L Word is pretty uncomfortable with its trans characters. The first was Ivan, a drag king who seems to primarily identify as male. Ivan starts spending time with Kit — a straight woman — which makes Kit’s sister Bette immediately uncomfortable. “She is in love with you and she wants to be your husband,” Bette tells her, correcting Kit’s use of male pronouns while simultaneously stressing her distaste for all this reckless gender-bending. Myth #4: a trans person who appears attracted to you always has sinister intentions.

Then there’s Max, a female-to-male transsexual who, once he starts taking male hormones, begins behaving like masculinity run amok: acting jealous when his girlfriend talks to other guys, becoming physically aggressive with her and throwing temper tantrums right, left and centre. In the final season, Max gets pregnant and is abandoned by his partner. Which brings us neatly to Myth #5: trans people don’t get happy endings.

Television, we can do better.