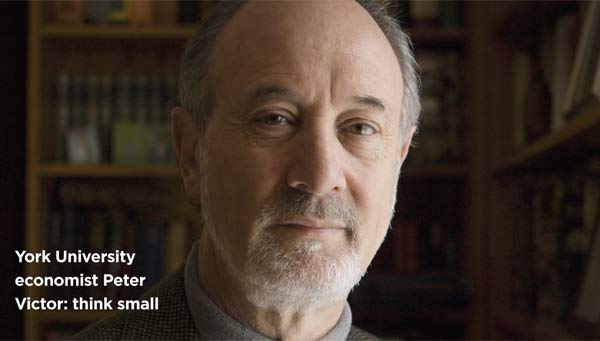 How can we escape our current economic mess while simultaneously avoiding the looming triple threats of peak oil, climate change, and species extinction? York University ecological economist Peter Victor has the answer: significantly slow the nation’s economic growth. According to him, it’s the best way to bring us into balance with the biosphere while fixing our battered finances.

Explains Victor: “The economic growth we have had in Canada in the past 30 years has not resulted in full employment, elimination of poverty, or the reduction of greenhouse-gas emissions.” But, he says, “with the right policies, we could achieve all these without relying on economic growth.”

Those policies, which are outlined in his book Managing Without Growth: Slower by Design, Not Disaster, include a rapid transition from fossil fuels to renewable energy, targeted programs to tackle poverty rather than relying on trickle-down economics and a shorter work week balanced with less consumption.

Managing Without Growth was released last November, but its vision is particularly timely, given the recession. “We’re in very serious trouble right now, because the recession was really started by failed economic policies and by failed supervision of financial institutions,” comments Frank Muller, a professor of economics at Concordia University in Montreal. Victor’s approach, he points out, is an alternative, “a different economic system, with different policies,” that would see us having to “live within the constraints of the natural system.”

While Victor’s ideas have been praised by David Suzuki and Toronto mayor David Miller, the federal government isn’t interested. But this doesn’t surprise Victor, who believes it’s up to the public to push forward the idea of zero growth: “Policy changes must be wanted and demanded by the public because they understand that there will be a better future for themselves, their children, and the children of others if we turn away from the pursuit of unconstrained economic growth.”