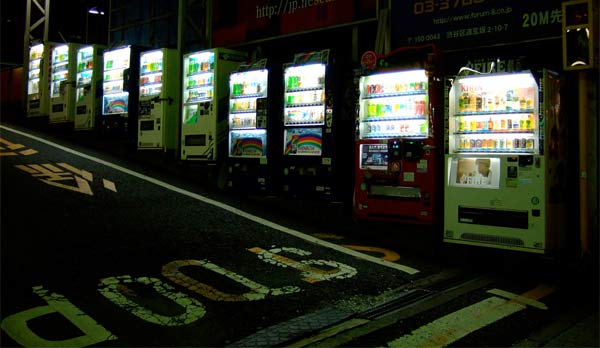 In North America, we barely notice vending machines. They dispense soft drinks, water, sometimes coffee (or laundry soap in laundromats). In Japan, however, vending machines have been elevated to a fine art. To an outsider, these machines, called jidoohanbaiki, are ubiquitous — incredibly, there is one vending machine for every 23 Japanese citizens. In Tokyo, you typically see them every couple of blocks, often lined up half a dozen or more in a row. Having experienced them, I think Canadians are missing out on the opportunity to purchase everything from french fries to condoms to fresh flowers without having to talk to a salesperson.

In addition to the expected pop, juice, and water, in Tokyo you will find dozens of exotic green tea flavours (I developed a taste for one called “melon milk”), iced and hot coffee (as many as six or seven varieties in a single machine), cigarettes, alcohol (beer, whiskey, sake), food (rice balls, ramen soup, octopus dumplings, french fries, eggs, 10-kilo bags of rice, and more elaborate meals that you heat by pulling a string that activates a blast of hot steam in the container), fresh flowers, umbrellas, comic books and magazines, DVDs and CDs, clothing (hats, shirts, ties, socks, lingerie), razors, and even toilet paper. Jidoohanbaiki are so sophisticated that some of them can make change from a ¥10,000 note (the highest currency). An age-verification card is used for cigarettes and alcohol, but a new generation of machines now have “face-recognition scanners” to check an individual’s age.

Why does Japan have the most advanced vending machine culture in the world and we don’t? The big surge in them started with the 1964 Tokyo Olympics, when millions of people needed to be served food and other goods, but since then the range of products and number of machines has dramatically expanded. One theory is that the Japanese corporate work ethic means that many white-collar workers — known as “salarymen” — go home very late at night, often after sake-drinking marathons with colleagues (hence the cut flowers and beautifully gift-wrapped sweets in many jidoohanbaiki; peace-offerings to bring home to an irritated spouse). And to serve a population as large as Japan’s — 127 million — it’s essential to have easy, 24-hour availability. And the famously modest Japanese prefer buying certain products (tampons, condoms, pornography) from a machine rather than facing a sales clerk. Of course, there is an environmental issue with so many vending machines humming away day and night. To adopt them here, we’d probably need Energy Star models, ones that are fluorocarbon-free, even solar-powered. In fact, these are already being installed. Where? In Japan, of course.