The hype’s died down, but cybercrime still thrives

In the 1980s and ’90s, the term hacker struck fear into a public still new to the web — basement-dwelling loafers who were happy to take down a network or website for bragging rights. Since then new online fears have popped up that have reduced hackers to the title of an early Angelina Jolie movie. So what happened to all the geeks? Did they all leave the basement and get normal jobs? Not quite, says Craig Silverman, co-author of Mafiaboy: How I Cracked the Internet and Why It’s Still Broken. Hackers are still very much around and often responsible for our latest set of computer-related fears. 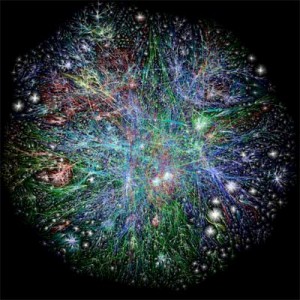 A map of global internet usage compiled by opte.org. For details of the mapping project, see their website. Creative Commons licensed.

Operating mostly out of Eastern Europe and Russia, cyber-gangs can make a lot of money either stealing and selling personal information, or using denial-of-service attacks to blackmail businesses, says Silverman. Victimized companies will sometimes purposely keep these attacks under wraps to avoid the negative attention. “That can hurt their stock price, that can hurt their brand,” Silverman says, which may be why we’re hearing about hacking less.

Other hackers have gone undercover — working with governments. “There is an arms race in cyberspace that’s very troublesome,” says Ronald J. Deibert, director of Toronto’s Citizen Lab at the University of Toronto. He explains that states develop or contract out network attacks against other governments, or to take down websites they find threatening.

But there are still hackers out there who are happy to be in the spotlight. “Hacktivists,” like Deibert and his colleagues at the Citizen Lab, use their hacking skills for good, to subvert censorship or uncover wrongdoing. In March, Citizen Lab made international headlines when they revealed a massive, Chinese-based cyber-spy ring called GhostNet that was tageting computers belonging to everyone from the offices of the Dalai Lama to foreign embassies. The thrill of exploration that inspired hackers from the beginning still exists, Silverman says. “There are still people who are enamoured with the internet and technology and computers, and just want to gain knowledge, and they take things apart. And that’s sort of the core hacker ethic.”