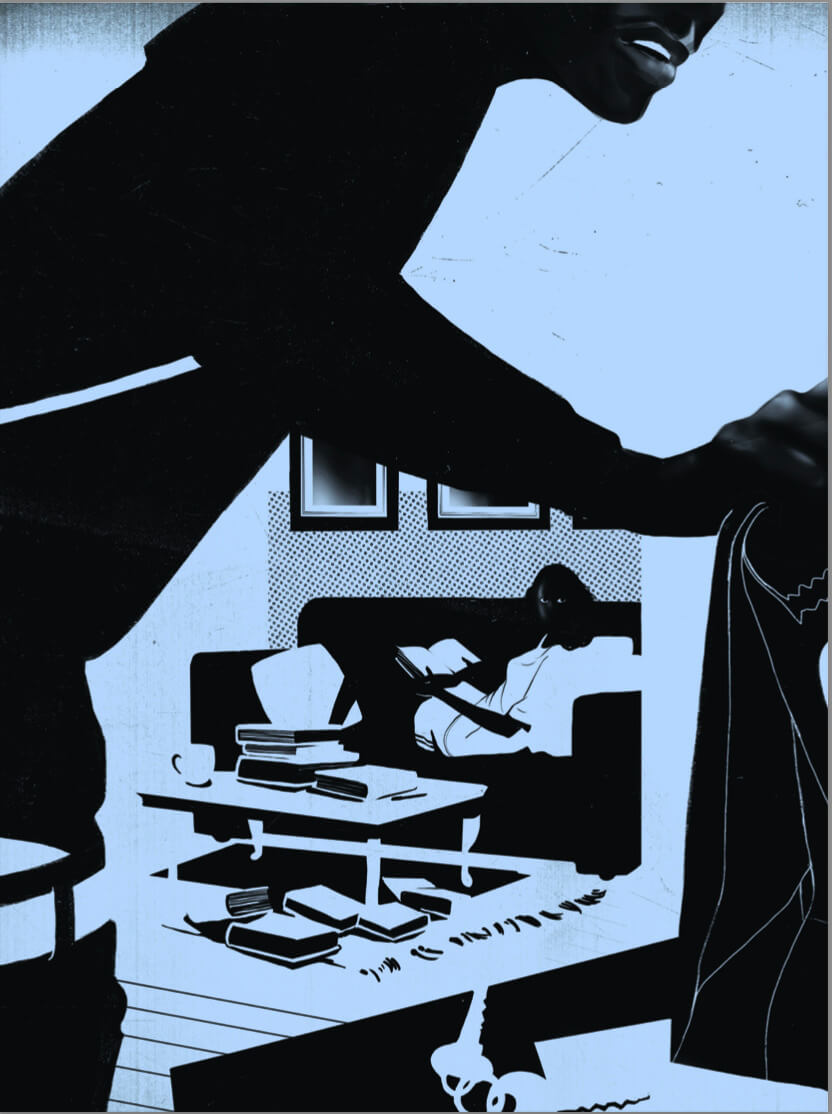 Jerry waited beneath the underpass for Tre, away from the streetlamp’s light.

Not many people were about in that part of the city, but he could always take out his phone and pretend to chat if anyone got close. It was cold, really cold, and under any other circumstance, Jerry would have gone down to Tre’s apartment in the Junction, but Tre insisted that he pick Jerry up, promised a free dinner for his time—even a ride part of the way to his house.

Jerry had agreed, but he was regretting it now. Nina was home alone, and it was getting dark.

Headlights turned the corner. Tre’s beat-up Corolla swerved slightly as it headed towards Jerry. It jerked when it stopped.
Jerry opened the passenger door and got in. “You’re late.”
“There was a bomb ting by the Tim’s, bro,” Tre said as he turned onto Eglinton.
Jerry rolled his eyes, but his lips twitched in a smile. Tre
was his most loyal customer. “Really. Did she tell you how cold it is outside?”
Tre kissed his teeth. “You would’ve forgotten. Don’ even lie.”
They passed a first, and then a second, set of stoplights. “McDonald’s is fine,” Jerry said.
“… don’t know how she be wearing yoga pants in November.”
“Right there.” Jerry pointed to the golden arch, shining over a near-empty parking lot.
“She probably has a man, still,” Tre said, pulling into the plaza. He opened the driver’s door. “You want the usual?”
“Yeah.”
Tre left and headed into McDonald’s. Jerry scanned the parking lot slowly. There was an older man coming out of a convenience store with a lottery ticket in his hand. He got to his car, lit a cigarette and drove away.
Jerry reached into his backpack and pulled out a small pouch of white powder. Digging around in the backseat of the car, he found Tre’s gym bag. He removed one of Tre’s socks and slipped the pouch inside the sock, before returning it to the bag. Jerry looked around the parking lot again—empty this time—and waited for Tre to return. It was Charles’s idea to do the exchanges that way: surreptitiously. Jerry thought it trivial, but it wasn’t as if he could complain.
A few minutes later, he heard Tre’s footsteps approach, and the car door opened, briefly letting in the cold and the sounds of late-night millings about.
Tre handed Jerry a McDonald’s bag.
Jerry buckled his seat belt. “Let me out at Jane.”
“All right. Make sure you sit at the back of the bus, eh?”
Jerry looked at his friend, was about to say he knew that already, but decided against it. Tre returned Jerry’s gaze, and Jerry could see an opening behind the man’s bloodshot eyes, through which something soft and resilient passed.
“Tell Nina I said hi.”
Jerry nodded. He got out at Jane and Eglinton and waited for the westbound bus. When it arrived, he sat at the back and ate his meal. At the bottom of the bag, was a small wad of cash covered in plastic wrap, which he didn’t take out. Not all of it belonged to him.

Charles texted Jerry later that evening. Jerry held his phone tightly in his hand as it buzzed. Once, twice, three times, before it settled. He lay on his back, across the surface of his bed, staring at the popcorn ceiling.
In his mind, he pictured Nina, half a lifetime ago, her hands wrapped around a medal she won for a chess tournament, the only girl among a sea of her lighter-skinned peers. The closer he approached adulthood, the more iridescent she became, and he felt light and heavy at once.
He headed upstairs, the metal lockbox of cash at the bottom of his backpack. Charles was always out somewhere at an ungodly hour, waiting. As Jerry passed the living room, he saw Nina sprawled on the couch, asleep, two textbooks open on the coffee table in front of her. The bright dead colours of the aquarium channel splashed onto her face, her slightly parted lips.
He touched his sister’s cheek. Her face was warm, her breath warm. And her body rose purposefully and safely as she breathed in sleep, in future. He stared at her some time.
His phone buzzed again.
Before he left, he spotted his jacket folded over the top of a closet door, and put it on over his hoodie as he jogged down the front steps. There. Better. A buffer against the wind, which had picked up, it seemed, in the absence of bodies. It was as if the world around him misunderstood its relationship with its inhabitants, and Jerry felt something he couldn’t quite articulate. At the end of the street, near the intersection,
he could see the familiar blue-and-yellow lights of the bus, and headed toward them.