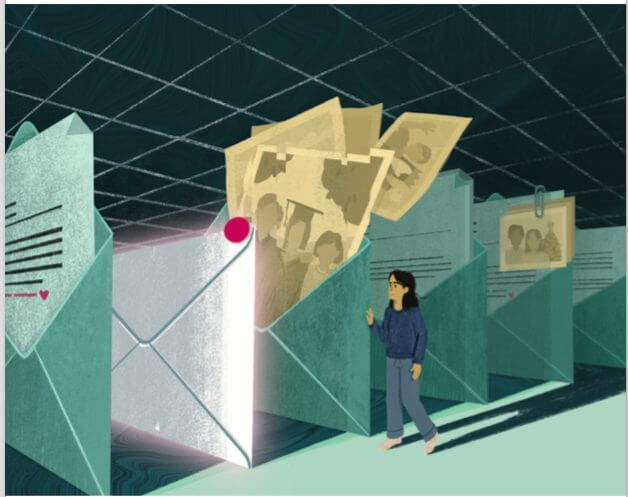 After my father died, I looked for him everywhere. Time crept forward in my one-bedroom apartment and my boyfriend might’ve been the only reason I even noticed the passing of days. His comings and goings signalled whether it was time to grieve at my desk, on the couch, or the bed. My desk, hardly a writing space anymore, became a place to search for my dad. I typed his name into my browser daily.

On one of these days, I was looking through my cloud storage for something when I found an unfamiliar folder in the “shared files” section of my account. It was simply titled “Google Photos.” I clicked and found several more folders and dozens more inside them, all with names like “Christmas_2013_Pics_&_Vids” and “2002 Family Vacation.”

My dad had never mentioned it, but at some point he must have shared these files without my noticing. I could see that they’d also been shared with my brother’s account as well as a cousin’s. There were photos from graduation ceremonies and photos of long-forgotten trips: in one, I’m 12 years old, standing in a shallow pool at a water park in Newfoundland. In another, my brother is balancing on a seesaw as if it were a skateboard. There were even photos I had never seen. I pored over the images for hours, leaving no folder unclicked. My eyes grew tired from staring at the screen.

Up to that point, my dad’s social media, Facebook in particular, had acted like a time capsule. Photos and posts triggered memories, which allowed me to retrace my steps and regain some sanity. I had spoken to my dad in my head many times, begging for some kind of sign so I could know he was at peace. I didn’t have any prophetic dreams. No spirit floated to my window at twilight. But I could find plenty of ghosts online by conjuring them with Google searches. Although part of me must’ve realized this wasn’t healthy, the solace was worth it. As far as the internet was concerned, my father was still alive.
He breathed through photos, silly tweets, and the occasional email.

One of the last comments my dad made on Facebook was about me. “Our beautiful daughter. Twenty-three years old,” he wrote. It was a comment on a post from my mother, who had shared two photos of me with a caption wishing me a happy birthday. The first was a school portrait from elementary school. I wore a white t-shirt underneath a magenta spaghetti-strap dress, and my smile was missing a few teeth. The other photo was a recent snap of me at my aunt and uncle’s house, sitting in a wingback chair and obliging with a smile when someone, probably my mother, asked to take my picture. Here, my hair was pulled out of my face with a floral headband and my teeth were intact, straightened by two years of braces.

I said my dad wrote that comment, but it’s probably not entirely true. By that time, March 2016, my mom was managing most of my dad’s Facebook activity. He likely dictated the comment to her while she typed it and pressed enter.

My dad had ALS, a motor neuron disease that gradually debilitates muscle movement. His hands and arms were the first to go. They hung at his sides like dead weight, making his shoulders slump toward the ground. For a while, he would still try to answer the landline at home by knocking the receiver off the cradle and shouting into the phone from a standing position. “Dad, where is Mom?” I would ask, exasperated. Eventually, he accepted that he needed help—whether through voice-to-text technology or another person—to answer calls, send texts, and email.

My dad lived with ALS for two-and-a-half years before it killed him. During that time, social media was helpful. In the summer of 2014, the Ice Bucket Challenge took off and it became trendy to care about #ALS. On the internet, there was no way to escape it. Those videos made my dad laugh, and it felt as if people everywhere were supporting my family, knowingly or otherwise. According to the New York Times,

the Ice Bucket Challenge raised over $115 million (U.S.) for the ALS Association, which has helped scientists advance their research on the illness. Meanwhile, Canadians raised $17 million for the ALS Society of Canada. The society promoted a tagline and hashtag: “Every August until a cure.” However, the trend faded. It felt as if many people (even well-meaning, caring people) just forgot about ALS when the social media challenge, and phase, passed.

My mother is something of a Luddite and she’s generally against social media. The night my dad died, his brother made a Facebook post lamenting his passing—before my mom had even called all the extended family. This wasn’t a malicious act on my uncle’s part, but it meant that some relatives found out about my dad’s death through Facebook. My mom had to jump on the phone and make calls she wasn’t ready to make. She soon shared the news of my dad’s death on his own page along with a note asking his friends to keep an eye on the paper for an obituary and funeral details. It wasn’t long after that that my mom was asking my brother and me how to delete my dad’s Facebook page. I think it was just a few days after the funeral. I suggested she “memorialize” the page, but she said: “I just want it gone.” And so, it was. Just like my father. Gone.

I’m not sure how long after my dad’s funeral—maybe one week, maybe two—I discovered those archived photos in the cloud. They were comforting at first, but soon they weren’t enough. They emphasized the distance between then and now, alive and dead.

In an episode of Black Mirror called “Be Right Back,” a woman named Martha uses new technology to imitate the presence of her late husband. It evolves from text conversations to verbal phone conversations. Eventually, Martha orders a physical facsimile. Near the end of the episode, she yells at the vessel of artificial intelligence: “You are not enough of him!” Although that scenario is hyperbolic compared to mine, the character’s words express how I felt as I combed through those memories, reminding myself of everything my dad was. Reminding me of who I was when I still had a father.

I could get lost searching for every fingerprint my dad left on the internet, but it would never be satisfactory. I had to  pull back from that computer screen to find the arms of my partner again, and those of my friends, and my family. The arms of the living.

I still feel as if I’m looking for my dad and trying to maintain a relationship with him, but I believe I’m in a healthier place. Still, there are things I can’t part with. For some time after my dad’s death, his voice was still on the answering machine for my mom’s landline, saying, “You’ve reached Ron, Doreen, Chris and Becky.” I can relate. I’ve yet to change my cell phone’s contact name for that landline: “Mom and Dad.”