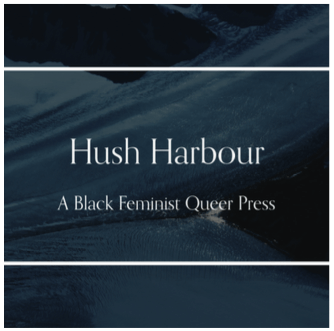 Alannah Johnson and Whitney French know the world needs more Black literature. That’s why the Toronto-based writers have launched Hush Harbour, a literary press dedicated to imagining Black feminisms and uplifting works of short fiction. “There are so many Black writers and storytellers to uphold and affirm,” says French. “Among the many nuanced stories within Black communities, Hush Harbour seeks to build a home for all our histories and create a platform beyond binaries and borders.”

A “hush harbour” was a religious gathering place for enslaved populations in the United States. It’s a fitting name for the publishing house, which is fostering a space to celebrate Black existence unapologetically. “We are rooted in a deep understanding of oppressive systems and barriers against us. And still we resist,” reads the press’s mandate. (The press’s name was inspired by a different local initiative called Hush Harbour, an interactive “sonic walk” of Toronto—an audio project and walking tour by multimedia artist Camille Turner which examines the realities of Black life in Canada before the abolishment of slavery in the British colonies.)

By centring Black voices, Hush Harbour will help bridge the gaps of opportunity and pay that Black authors face within Canada’s publishing landscape. After the viral campaign #PublishingPaidMe exposed industry-wide racial disparities last summer, publishing has been forced to reckon with its systemic racism. “We have witnessed the unveiling of inequities within these very rigid systems upheld by CanLit,” says Johnson. “Equitable and ethical economic practices for our Black press have been the guiding foundational pieces in reimagining the future of publishing.”

Black people remain underrepresented at all levels of the publishing industry, from editing to distribution to management roles. Hush Harbour is stepping in to interrupt the status quo in Canada’s literary arts scene, offering a space for Black writers to be our entire, uncompromised selves—but it’s not the first to do so. Johnson and French are building on the legacy of Toronto-based Sister Vision Press, which published writing by women of colour from its inception in 1985 until it folded in 2001. Its iconic writers included Afua Cooper, Djanet Sears, and Dionne Brand.

While filling big shoes, Hush Harbour’s founders will continue to nourish their own writing and multidisciplinary practices. French, the author of the critically acclaimed anthology Black Writers Matter, is at work on an afro-futuristic novel. Johnson is co-founder of the Black Gold Archival Project, which is launching a residency this fall, and is a director at Sisterhood Media TV, a Black-owned and powered production and distribution company.

Hush Harbour is beginning to accept manuscripts this fall, and will be amplifying the work of emerging writers while also supporting established ones. Their first books will publish in fall 2021. They hope that others in the industry follow suit. “We truly see this as a beginning,” says Johnson. “We want to inspire more Black publishing presses to come along and be a part of the industry.”