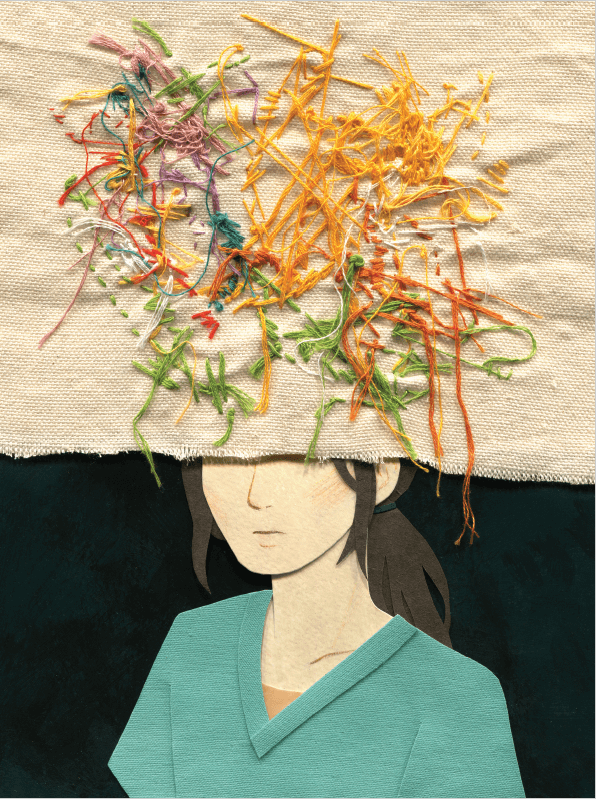 The on-call room smelled like two decades of coffee breath. She slipped past its heavy door, her eyes protesting the quick adjustment from the bright fluorescent of the hospital corridor to the on-call room’s dim bulb, which protruded nakedly from the wall above the bed in the corner. She sat on the mattress—covered with some kind of crinkly plastic to shield it from the parade of different residents on overnight shifts, a new body every night—and slowly flexed the fingers of her right hand, splaying them apart and then curling them into a tight fist. A cold hard ache was beginning to bud in her joints.

Her head buzzed, and she counted, 27 hours since she had last slept. The ancient clock radio on the nightstand said 13:00, so, five hours to rest. She sighed, slipped under the covers, itchy cotton sheets rubbing unpleasantly against her scrubs, and clicked off the light above her head. In the dark, the coffee breath seemed even more oppressive.

One week last semester, in the evening after lectures, Sam had sat at the kitchen table with her roommate, drinking beer and stitching up a chicken. It was good to practise on raw chicken, which had a similar consistency to human muscle. They would don their surgical gloves with great ceremony and begin, punching the needle through the meat and tucking it in and out, pulling the sutures tight.

Sam had a head start because Mom had taught her some of the stitches when she was younger. Blanket stitch and mattress stitch. Also the ornamental ones, the ones Mom used when embroidering fussy little flowers onto the corners of handkerchiefs and the hems of baby gowns and little wall tapestries with kitschy sayings on them. Seed stitch, long and short stitch, running stitch, and backstitch, and whipstitch, and French knots.

Sam found embroidery frustrating. It took too long, and she got impatient if her stitches weren’t even or didn’t turn out right or the hoop slipped. Mom didn’t care about that sort of thing. Her favourite part was picking out the colours. She’d pull out the little box: thick licks of thread twisted around spare bits of cardboard cut from cereal boxes, mixed in with a few bundles freshly purchased from the fabric store, still coiled neatly in their paper bands.

The box was an explosion of rainbows from which she would carefully select, drifting her twitching fingers over the surface until they shot down like a bird spying something on the ground. She’d lay out the strips, push them together in different combinations, delighting in the way things could morph and change so easily.

When she stitched, it was quick but not frenetic, smooth, even motions that put in Sam’s mind the word deftness. The pads of Mom’s fingers seemed to have extra nerve endings. Her hands danced across and around and beneath the hoop, facilitating the steady dipping of the needle, in and out, through and back. Punching through the weave of the cotton, proving its permeability.

The chicken was also permeable, though it didn’t look it. But stitching a chicken didn’t require the same tenderness as Mom’s shreds of cotton. There was no need to scrabble the tips of the fingers over the surface, quickly searching for the perfect spot, the certain looseness, where a network of threads would part to let you pass through. The chicken was a smooth mass; it was one thing, and one only, to be cut and rejoined cleanly. It needed to be spoken, not listened, to; touched firmly with a steady hand.

Charlotte, Sam’s roommate, threw it down on the table with a wet slap of frustration. “Yours is so perfect,” she moaned, and took a swig of beer.

“I think my stitches are too tight.”

“They’re so even.” Charlotte rolled her eyes. “How did you do that?”

Later, Sam dug a pillow out from the bottom of her closet. It didn’t match anything else she owned. It wore an embroidered cover: a garish sunflower crawling up from the bottom left corner.

She sat on her bed and traced her fingers slowly over the stitches. It seemed that what Sam lacked was a certain calm. Her mother’s carefree floatiness had birthed this sunny burst, which lay there gently, as it was meant to. Sam’s own tight stitches would have warped and pulled the fabric. It was the same with the chicken—it had puckered. The flesh squeezed together too tight, straining against the unwaxed thread.

Earlier tonight, when Sam hadn’t slept in only 25 hours, she’d watched Dr. Carrero sew the forehead of a little girl, thinking of chicken and sunflowers. Blood pooled everywhere, garish against the girl’s paleness, and the buzzing feeling growing at the base of Sam’s skull shifted something. Dr. Carrero’s hands were her mother’s hands. She saw that same flick of the wrist, the businesslike way fingers curled to draw thread through, quickly. She heard the muffled pop of needle through cotton, stretched tight as a drum. The needle pushed and then released, soft fingers with their crescent-moon nails reaching around to grasp it anew and gather it through the other side, more leading, guiding, than pulling.

But these fingers were large and round, straining against the surgical gloves. Not her mother’s hand, no. Dr. Carrero had hairy arms and a big gold watch that slid against his glove. He poked himself with the needle.

The illusion was broken, her mother’s phantom gone. Sam mopped some of the blood away so that Dr. Carrero could see where he was stitching.

It was different than chicken.

The first time Charlotte saw a resuscitation, she came home crying, shocked by the full-strength pounding of the chest, the rib-cracking, the sternum-snapping bluntness of it. She couldn’t stop looking at the patient’s face, she said. Char wanted to be a doctor because she was smart and she was sweet and kind. She wasn’t prepared for the violence of this type of kindness, the way saving a life sometimes looked like ending it until the very last second.

Sam, on the other hand, knew that details were the important part. In patients’ faces she saw their composite parts. The cuts and the clots and the areas of swelling and her mind began focusing in on each in turn. If you made sure the details were right, you could step back and see everything falling into place.

But the back of Mom’s embroidery had always been a mess, a vibrant tangle of knots and frayed threads looped around each other. Sam’s, in contrast, was a reverse image of the front of the hoop, like a photo negative, almost but not quite right.

If a stray knot appeared in the embroidery floss, clogging up the backside in a tangle of forest green, Sam threw the hoop with a yell, and then later, picked it back up and spent 20 minutes cutting and retying and unpicking thread. All the while, Mom, who at the time still had enough mobility to be languidly stitching a pink and orange calla lily into the corner of a pillowcase, kept telling her, “The back doesn’t need to look good.”

Mom shook her head with a faint air of bewilderment, knotting a hot-pink strand of floss. She patted around the bed for her scissors and failing to find them, put the thread in her mouth and snapped it in two with her teeth. “It’s just there to hold everything together.”

Now, in the dark of the on-call room, Sam stretched her aching fingers against the coolness of the pillowcase, feeling for her mom’s handwork as though it might appear. What was it that Charlotte had said to her this morning, in that cloying voice that Sam recognized as pity? Don’t push yourself too much. People were always saying that to her, but look, here she was in a coffee-smelling tiny room in an underfunded hospital, and outside were hallways stacked on hallways, all leading to people who needed something. In a few hours, Sam knew, she would have to get up and splash cold water over her puffy eyes and go visit the girl with the forehead wound, the man whose appendix had ruptured on the operating table, the woman with the tumour throbbing deep in her abdomen.

She sighed and pulled the covers up to her chin, refusing to check the clock and confirm how few hours she had left to rest. Instead, she tried to remember what she had been stitching with her forest green thread that day when she’d been so frustrated by the knots. But the more she tried, the further the memory floated from her. All she remembered was that mess of threads, and the way it was all bound together: the tension of the hoop, the weave of the fabric, the taut loops of thread.