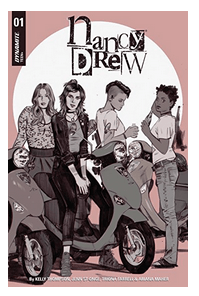 At three-thirty, when local high schools let out, I regularly caught the Dufferin bus near my place in downtown Toronto and used the long ride northbound to Yorkdale Mall to snoop on teens’ conversations, Shazam songs they were playing too loudly on earbuds, and read flirty chat messages over their shoulders. While I kept a notebook open and jotted down lines of dialogue and character notes, nobody ever guessed I was a writer. I wrote two young adult novels at that suburban mall, sitting in the food court and a café.

The bus route passed a company promising private investigator training and I felt like I’d missed my calling. Becoming a writer was second best. I was meant to be a fearless detective, like my childhood idol Nancy Drew. Growing up in bleak 1980s Parkdale, decades before gentrification swept through, I learned to slip my keys between my fingers, make eye contact, memorize faces and license plates.

I hoped my body language communicated that I was a fighter. It was the late 1980s and Paul Bernardo was disappearing teen girls my age, but I refused to stop going out alone at night. I spoke my mind
to the racist skinheads recruiting at my high school. I tried to live like Nancy, who ran toward danger rather than away. The intrepid detective never asked for permission and solved mysteries using her wits. She provided a semi-empowered but unattainably perfect prototype of girl. Since my parents were feminists who took me to protests, didn’t let me watch most television, and dressed me in the same clothes as my brother, I always felt out of step with other girls. Feminine social morays were strange and mystifying. So when I became a teen, I imitated Nancy.

At the age of 10, I’d been gifted an almost-complete set of Nancy Drew hardcovers by my uncle—a man I barely remembered—and devoured all of them. Twice. I hunted through used bookstores for copies of the missing books and bought them with allowance money.

The ones I owned were published as far back as the 1930s and 1940s, the era of Rosie the Riveter, when men were away at war and women were encouraged to get jobs. That Nancy was independent, had her own car, an obliging attorney father, and a housekeeper who handled all the cleaning and cooking. She preferred the company of her BFFs Bess and George, and only called in handsome Ned Nickerson when she needed backup and the girls were away. In the 1950s, Nancy developed lady-like decorum and hesitated more; by the 1970s, she was a shadow of her former self, a pretty upper-middle class girl who solved mysteries.

Even when I first read the books, I knew they were problematic. Nancy, perpetually 16, didn’t go to school or have to put up with being treated like a cute little brainless girl. Adults believed her when she told them a heist was about to happen. Almost all the people she helped were white and well-heeled, heiresses, or innocent old ladies swindled out of their fortunes. The bad guys were frequently “swarthy” and poor.

Now, when I teach writing for young adults at UBC, I bring in books from different decades to show how the genre has changed to embrace novels that depict the intersectional world teens live in and realistic issues they’re facing. Examples of Judy Blume’s oeuvre and even Carrie represent the 1970s, but I have trouble finding a Nancy Drew that doesn’t perpetuate racial stereotypes and criminalize poor people. The series has been remade multiple times, but by the 2000s, it had devolved into little more than suspenseful Harlequin Romances for teens.

All that changed this past year. The movie Nancy Drew and the Hidden Staircase featured Sophia Lillis as a skateboard- riding tomboy detective. But it’s the five-issue Dynamite Entertainment comic book series by writer Kelly Thompson and artist Jenn St-Onge that won back my heart. Nancy has an asymmetrical punk haircut with bleached tips, Bess is decidedly plump again, and George is openly queer. Their social circle includes people of colour from a range of social circles. Nancy’s still righting wrongs, only now they actually matter, like the suspicious death of her mother. The characters are real, the suspense is palpable, and she’s an age-appropriate shero for tweens. These comics appreciate what was fun about the original series but address its flaws.

I no longer have to feel embarrassed about my fantasy of becoming a detective. And, finally, I can bring Nancy Drew into my writing classes as a springboard for talking about how problematic teen heroes can be recreated and find new readers in 2019.