One might be tempted to call Transmeditations, a new book of poems by David Bateman and Patricia Wilson a “match made in Heaven.” But to paraphrase Mae West, Heaven had nothin’ to do with it.

Legendary figures on the Canadian queer arts scene, neither poet has their head in the clouds: Transmeditations is blunt, raw, and exquisitely crafted. Bateman’s lyrical, deliciously fruity rhythms and Wilson’s diary-like, incisive observation poems are a perfect match: oil and vinegar, but with lots of sweet, and bitter, honey.

Chatting with either poet is always fun, but when chatting to both one realizes that, together, Bateman and Wilson have witnessed a generation’s worth of pivotal changes in queer Canadian life. Subsequently, they are not only poets, they are national resources. Maybe we could build a pipeline between them and emerging queer poets?

RM: Why do a book together?

Patricia: We were working on Musings From the Bunker and Slouching Towards Womanhood, [Wilson’s other new book, which Bateman edited] and in the middle of it I got bored and called David to say let’s do something really fucking different and do a dance back and forth with poetry

David: The first incarnation was a chapbook called “this waltz with words.” And as Patricia said, she got bored and wanted to write more poetry, she wanted to dance with words. I think I had told her about my other collaborations. So it was a break for Patricia as a writer and me as her editor. We both wanted to just let some poetry flow out of our, well, hearts. Or wherever it came from.

RM: How did you pick the poems?

Patricia: We didn’t pick the poems. We responded to each others daily neuroses, which were laid out on the page in the form of poetry. No editing, just the facts and realness folks

David: The other collaborative poetry I’ve done has been done online, mostly back and forth emails where we both write and then the other writer responds to various themes in the pieces. For example, in the book’s first poem, “Pirates Swagger,” Patricia, speaks of the idea of a gendered gait through the metaphor of a Pirate, and the swagger pirates are often characterized as having. One line struck me – “never / Quite there”. My own life [is lived] within various sex/gendered modes. And as someone who “never never” quite knows where they stand regarding gender/sex identification, Patricia’s words inspired the first words of my response poem. 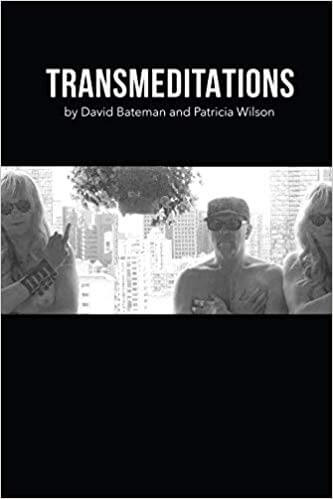 RM: This is a very Queer way to present a book, with the poems flowing together. Tell me about queering the process of selection while harmonizing the works.

Patricia: As the intensity increased around the poems it was if we were praying to each other. We were seeing each other really for the first time in the purity of emotions and words. It was something that became holy to us because we were there to create the miracles that only two poets can see in the time left to them. Our prayers were to acknowledge that we are complete as we are now.

David: I love this idea of praying to each other. I see the process now as me considering my own complex route through gender, through sixty years, and how, in a sense, Patricia became a kind of oracle for me, someone to lay out some of my sex/gender prayers in front of. And of course, the oracle spoke back to me in the form of her own prayers. As far as queering the process, I don’t mean to simplify the idea of queering, but between the two of us, me and Patricia, there isn’t much hope of anything we do, together or apart, not being about as queer as it gets.

RM: If I was a 15 year old queer reading this book, what would you both/each want that young reader to learn and understand?

Patricia: I would want them to understand that no one can tell them what they feel and how they should see the world, but there are touchstones within art that can help guide them towards the fulfillment of who they are. It’s important for them as someone with less experience in life to see that the struggle is not only their struggle to be who they see themselves as, but also the struggle of the person next to you on a bus who has to re-evaluate their understanding of gender, sexuality, or even culture.

David: Exactly. Being on a bus with all your gender on display, which is part of one of my favourite poems by Patricia, can be very difficult for some of us. To be able to see that daily struggle, and that there are ways to move through that struggle, well, that can be a really wonderful way to endure all the bullshit that gender can heap upon us in a single lifetime. Poetry can be a way to work through self-doubt and the daily stories/narratives that shape us. Even if no one reads it. Who cares? The process can be very fulfilling and cathartic.