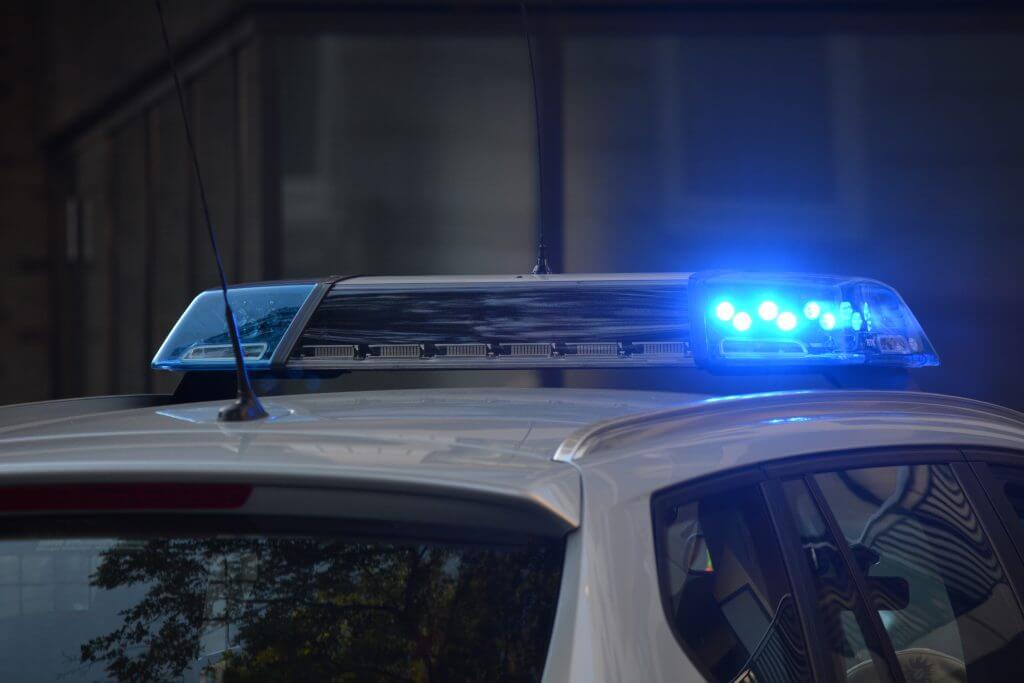 Domestic violence takes place in up to a staggering 40 percent of law enforcement families. But police forces mostly ignore the problem, writes investigative journalist Alex Roslin in his award-winning book, Police Wife: The Secret Epidemic of Police Domestic Violence. The excerpt below is adapted from the book. His 2004 article in This about an RCMP officer who killed his ex-girlfriend was nominated for a National Magazine Award.

At 3 p.m. on April 26, 2003, Crystal Judson-Brame was speaking with her mother Patty on a cell phone while walking from her car to the pharmacy in a shopping mall parking lot.

“I think I see David,” she said referring to her estranged husband David Brame, the chief of the Tacoma Police Department, just south of Seattle. Brame had just pulled into the parking lot in another car with the couple’s two children.

Crystal’s father, Lane Judson, at home with Patty, told his wife, “If she sees him [David], tell her to get the hell out of there.”

Patty Judson tried to call her daughter back seven times in the next 12 minutes, but there was no answer. In the parking lot, Crystal returned to her car. But David slipped past her into the driver’s seat and sat with his feet on the ground, stopping her from getting into her vehicle. Witnesses heard raised voices.

David Brame suddenly pulled Crystal’s head down—or she may have crouched to protect herself; it’s not clear. The police chief drew his .45-calibre Glock service pistol and shot Crystal at point-blank range behind the left ear.

Crystal fell forward, a quarter turn to the right toward the rear of the car. David then shot himself in the right temple and fell backward while the couple’s two young kids sat in the other car nearby.

With attention nationwide focused on the terrible incident, Tacoma city officials at first said Brame had been a good police chief and that the murder-suicide was “completely unexpected.” But evidence soon emerged that officials had covered up for Brame and refused to heed warning signs or take action that may have averted the tragedy.

Investigators quickly found that red flags were apparent even when Brame was first hired as a cop. As part of the screening, a psychologist recommended against his hiring. A second psychologist said Brame was “deceptive,” “defensive,” and a “marginal” applicant. Brame had also failed the behavioural portion of the entrance exam at another local police agency, the second psychologist noted.

The Tacoma Police Department ignored the concerns and hired Brame, the son of a cop, anyway. As a police officer, Brame was the subject of a rape complaint and an allegation that he had threatened a girlfriend with his gun, though investigations never led to charges. He rose through the ranks and eventually became chief of police.

At home, David Brame was reported to be exceptionally controlling, checking on his wife’s whereabouts and receipts and giving her $100 every two weeks for household expenses for the family of four. He reportedly called her “fat” and “ugly,” saying no man would want her.

“He would say, ‘You know, I can choke you out so quickly or I can snap your neck,’” Crystal’s mother Patty later said. He reportedly tried to badger Crystal into participating in threesomes and foursomes.

In a declaration she filed as part of a divorce application a month before she was murdered, Crystal said her husband had tried to choke her twice in the previous six months, said he could break her neck and pointed his service gun at her saying, “Accidents happen.” “I do remain very afraid of my husband,” she said.

Around the time of this declaration, Crystal told Assistant Police Chief Catherine Woodard that David had threatened to kill her, investigators later learned. Instead of reporting the allegation or starting an investigation, Woodard turned her notes about the conversation over to David Brame.

Stories about the abuse allegations came out in local media in the days before Crystal was murdered. Instead of taking any action, city manager Ray Corpuz defended the police chief, saying Brame was “doing a great job.” Tacoma Mayor Bill Baarsma also dismissed the allegations as a “private matter,” calling Brame an “outstanding chief.” Also unheeded was a recommendation from city human-resources officials that Brame’s gun and badge be taken away.

Crystal’s parents and other family members filed a $75-million wrongful-death suit against the city of Tacoma and the local county, saying officials failed to deal with Brame’s behaviour and protect Crystal. In 2005, Tacoma agreed to settle the suit by paying the couple’s orphaned children and Crystal’s estate $12 million. As part of the settlement, the city also pledged to improve police procedures and declare April 26 each year Domestic Violence Awareness Day. In a separate settlement, the county agreed to create the Crystal Judson Family Justice Center, which offers free food, help and shelter to domestic violence survivors.

Crystal’s parents also took their campaign to the state legislature. As his daughter lay dying in the hospital after the shooting, Lane Judson, a retired U.S. Navy chief petty officer and former manager at Boeing, had promised her he’d do everything he could to prevent such crimes from happening to others. In 2004, the Judsons’ campaign convinced the state of Washington to adopt a law requiring all police agencies to have a strict policy on domestic violence involving police officers.

But the Judsons knew the problems went beyond their state. They continued their campaign on the national level and scored another breakthrough in 2005 when they convinced Congress to vote to create the Crystal Judson Brame Domestic Violence Protocol Program as part of legislation to extend the Violence Against Women Act.

The measure gave law enforcement agencies access to a grant fund (currently worth about $220 million annually) that they could use to create programs to stop police officers from committing domestic violence, sexual assault and other crimes and to help survivors of such crimes.

The Judsons’ campaign didn’t stop there. They continued to speak across the U.S. and beyond about domestic violence in police and other homes, often bringing audiences to tears with their emotional account of the impacts on their family. “We grieve every day,” Lane and Patty wrote in their foreword to Police Wife. “How we all miss Crystal during the holidays. There are no more phone calls, just to talk. Crystal will never become a Gramma. Everything taken for granted daily is forever lost to Crystal and her children.”

Police domestic violence isn’t simply about a few badly behaving cops. It is by all evidence a rampant, systemic problem—a serious job hazard for many police officers—rooted in the very nature of law enforcement and likely existing in any society where police have a similar structure. It thus requires systemic solutions.

Even a zero-tolerance police policy on officer-involved domestic violence does little to tackle the underlying causes of the abuse: power and control, anti-woman attitudes and impunity. The strictest policy will deal mostly with symptoms, not the deeper structural problems.

Without deep changes, the abuse epidemic thus appears inevitable in any country where police exist in the same form. It is likely to persist so long as and wherever police carry on as an institution focused on power and control, predictably attracting abusive men who shield each other from punishment and strive to maintain a male-dominated police culture.

Professional policing is a fairly recent human invention. The first large modern-day professional police forces emerged in the 1800s in Europe and North America as industrialization transformed farmers into factory workers in quickly growing cities. The social upheavals forced governments to create the “broad historical project of police,” which had as its mission “fabricating a social and economic order,” according to a study co-authored by Carleton University professor George Rigakos.

“The police project, therefore, has a long history, emerging as a civilizing ‘science’… and eventually as an essential system of order maintenance for the discipline of the indigent, the poor and the working classes.”

Police play a similar role today. “Police power assumes its most formidable aspect when cops deal with the underclass. This is the group they’ve been pressured, implicitly, to control,” said Anthony Bouza, a former commander in the New York Police Department and ex-police chief of Minneapolis, writing in his book The Police Mystique. “When cops deal with the poor (blacks, Hispanics, the homeless and street people), the rubber of power meets the road of abuse…. The underclass must be kept in its place or the chief will lose his or her job.” Instead of addressing racism in society and other problems that create an underclass, “the usual answer is to get the police to clean up society’s failings.”

Statistics back up this view. The number of police officers per capita in the U.S., Canada and other countries is closely correlated with unemployment, income inequality and economic marginalization, particularly among women, African Americans, First Nations people and youth, according to data compiled for this book. The more inequality and marginalization, the more cops we tend to find.

It’s of course simplistic to say police exist only to mishandle calls about abused or missing women and oppress the marginalized. But the correlations do support Chief Bouza’s claim that policing the “underclass” is a central part of a cop’s life. A key tacit function of the police seems to be to preserve order in the face of the disruptive impacts of women’s inequality, poverty, economic marginalization, discrimination and subjugation of First Nations people. By so doing, police in effect help to preserve these injustices.

The data on correlations tells us an ugly truth about policing in our society—and in turn about what’s really needed to stop police domestic violence. The family troubles of police officers are inextricably connected to the marginalization present in a highly unequal, divided society.

Those who hope for a more just society would do well to make police domestic violence a key priority. The issue is a critical fulcrum for the entire system. That means abused police wives hold a key to sweeping social change. They are a terrorized and powerless underclass, literally at the heart of power and without voice, with the massive might of the state arrayed against them. Their conditions are so atrocious and precarious that not only do they almost never speak out in their own name, but they also can’t usually join other women and advocates to work together to improve their collective situation.

Most other disadvantaged groups collaborate publicly to build lasting social movements. Not police spouses. They usually wage their survival struggle utterly alone, in anonymity, with little or no help or knowledge of others in the same situation, each woman reinventing her struggle anew. Their unique position is why their condition is so little known and why improving their lives is so difficult. Real improvement can’t happen without deep social changes on many levels.

But despite the powerlessness of abused police spouses, they do hold great power in their hands over not only their own fate, but also the entire social order. Because of the resilience and resourcefulness of the human spirit, police spouses do break free and speak out, and they do so more and more. In their titanic struggle, their accumulating voices are not only testimony to the horrors they personally overcame, but also to some of the most extreme conditions of inequality and injustice existing in our society—an indictment of a social order that makes their condition inevitable.

That is the ultimate truth of police domestic violence. It is a mirror reflected back on ourselves.

Alex Roslin is an award-winning investigative journalist and author of the book Police Wife: The Secret Epidemic of Police Domestic Violence, 2nd Ed. (Knowlton, Quebec: Sugar Hill Books, 2016), winner of the American Society of Journalists and Authors’ Arlene Book Award and a finalist for four other international book prizes. He is a former contributor to This.