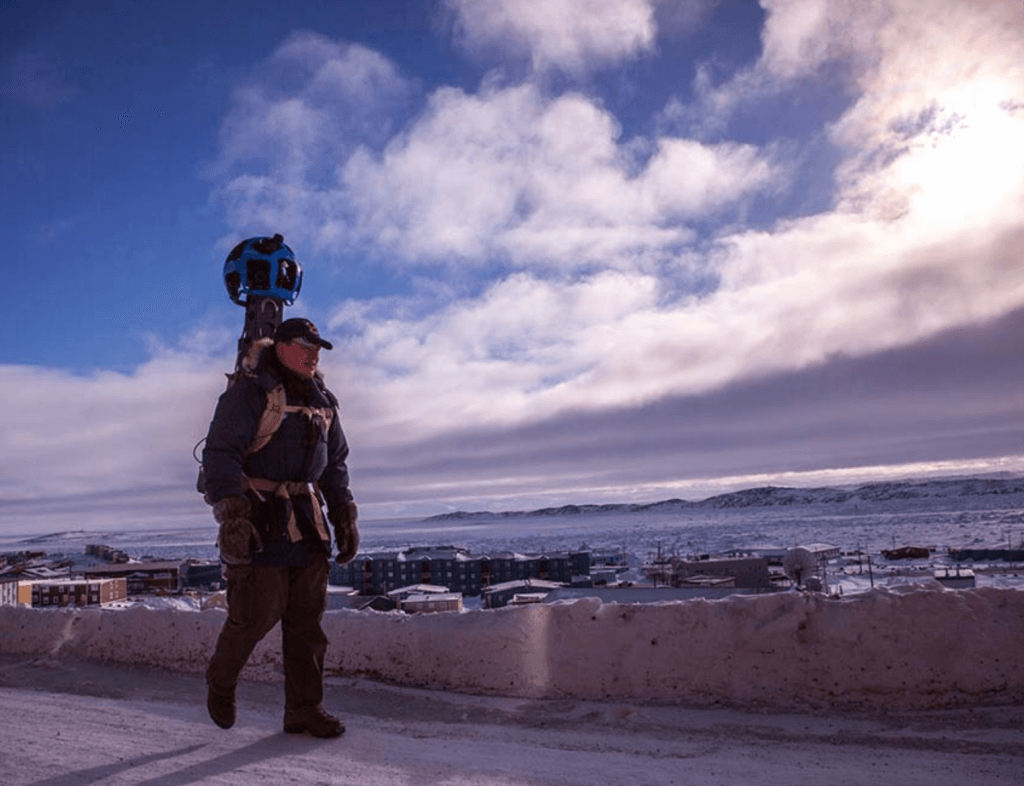 Chris Kalluk, Nunavut resident, hiking the streets of Iqaluit with the Trekker, a 360-degree camera. Photo by Google.

Until now, most Indigneous territories in Canada have been omitted from Google Maps, but a new initiative from the company has begun to change that. More than 3,000 Indigenous lands and territories have been added to Google Maps and Earth.

Over the past seven years Google Earth Outreach has partnered with Indigenous communities, government-sourced data repositories, and experts such as Steve DeRoy from the Firelight Group to gather information to include in the maps. DeRoy, an Anishinaabe cartographer and member of the Ebb and Flow First Nation in Manitoba, says the project has multiple layers of use, one of which is to address identity. “Most people who explore maps like to see their home on those maps,” he says.

But Indigenous communities aren’t always represented, which led DeRoy to ask himself how he could help get these lands recognized on Google’s base maps so when they do that search they can find where they come from.

The need to officially include these lands on Google Maps became increasingly clear after Google began running Indigenous mapping workshops in 2010, which gave Indigenous peoples the tools and training to map their home territories. Some started asking why these weren’t included on Google platforms so the company set out to fix that, with DeRoy acting as an advisor.

The project follows Google’s recent inclusion of Indigenous territories in the United States and Brazil, and involved a long-term process of dialogue and data collection. All of the added territories are federally recognized First Nations reserves and treaty settlements and are searchable on Google Maps, outlined in red and labelled according to current data. This data is largely from government agencies such as Northern Affairs Canada and Natural Resources Canada, who provided the bulk of the information. “Now when you go to Google Maps and Google Earth you’ll be able to see that data actually as part of the maps,” says DeRoy.

The initiative is an important step in the right direction as the country celebrates its sesquicentennial. “We’re talking about thousands of years of occupation of Indigenous people in North America, and to be recognized on those maps—it’s one step closer towards reconciliation.”

The project is an ongoing process, and those communities who would like to add their lands to the maps or update existing areas are encouraged to reach out to those involved in the project.

For now, DeRoy is hoping to inspire other regions to follow suit: “I would love to see this on a global scale,” he says.