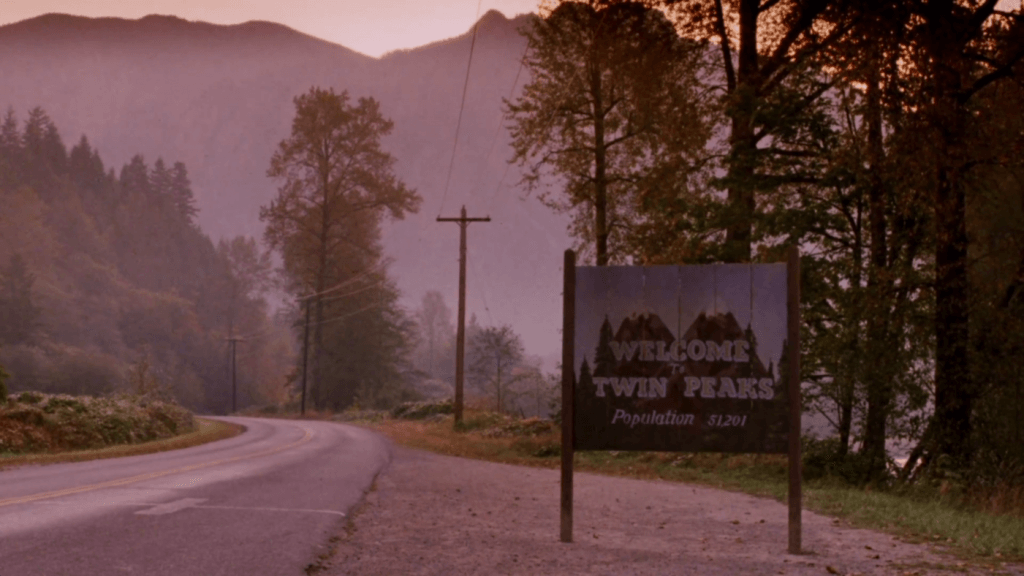 When Laura Palmer’s dead body washed up, wrapped in plastic, on a riverbank in Twin Peaks, Washington, I was 18—a year older than Laura was when she died. I met Laura on Sunday, April 8, 1990, when I, along with 34.6 million other viewers, tuned in to watch “Northwest Passage,” the two-hour pilot episode of a new ABC series called Twin Peaks.

Until that Sunday night, I knew very little about David Lynch, who created the show along with Mark Frost, except that my high-school boyfriend thought he was “really weird.” That was all about to change. From the moment I entered the town of Twin Peaks and met FBI Special Agent Dale Cooper, the Log Lady, and Laura, a homecoming queen who somehow has the time to lead a very busy secret life, my world would never be the same.

After its Sunday night debut, Twin Peaks moved to Thursday nights, occupying the popular 9 p.m. time slot against successful NBC sitcom Cheers. Thursday was often a party night and my friends and I would gather to get ready, watch Twin Peaks, and drink Bacardi and coke without having to worry about some bartender’s adherence to Smart Serve guidelines.

After the closing credits rolled, we would head out to dance, often shouting our theories about that night’s episode over the sound of some atrocious dance remix of some already atrocious C + C Music Factory song. Without Twitter theories and Vulture recaps to guide us, we were on our own to figure out exactly what “the owls are not what they seem” was all about.

I felt an immediate kinship with others who watched Twin Peaks, like a sort of pop culture shorthand. I had discovered the show on my own—it wasn’t my high school boyfriend’s hand-me-down Misfits record or Dead Milkmen T-shirt—and I held it close, protecting it from those I thought just didn’t get it. I rolled my eyes—underneath my carefully plucked to resemble Audrey Horne eyebrows—at friends who didn’t care who killed Laura Palmer.

The show’s first season wrapped in May 1990 with a season finale that had everything from a shooting to an attempted suicide. (Take that who shot J.R.!) Even though the season had ended, I just couldn’t leave Twin Peaks and Lynch behind. I spent the summer obsessively watching Lynch’s films, Blue Velvet and Eraserhead. I fell in love with River’s Edge—a movie I previously dismissed as a teenager—and that always reminds me of Lynch because it features both a dead female body and Dennis Hopper.

That summer, the mainstream was like a pop culture black lodge I longed to escape from. “Step by Step” by New Kids on the Block was extremely popular, just to give you an idea of the kind of hell I was in. Twin Peaks was my way out and the show started me on an indie culture path that would lead me to everything from Sonic Youth to Gus Van Sant’s My Own Private Idaho. Without Twin Peaks, I might never have discovered Nirvana (just think of how much more tolerable my social media feeds would be) who released Nevermind the week before the start of Twin Peaks’ second season.

One of the thing that made Twin Peaks so groundbreaking was the show’s subject matter. Sam and Diane certainly weren’t talking about incest, rape, trauma, and violence against women. Much has been written, however, about Lynch’s awful depictions of women: from Laura Palmer’s rape and murder at the hands of her father to Dorothy Vallens’ humiliation and degradation in Blue Velvet. I struggled to reconcile Lynch’s misogyny with the fact that he also provided me with some of my most powerful pop culture heroines. From Audrey Horne, who went from sass and saddle shoes to the rallying cry, “I’m Audrey Horne and I get what I want,” to the Double R’s fearless owner Norma Jennings, whose strong female friendship with Shelly Johnson/Briggs ran throughout the show.

The second season of Twin Peaks began on September 30, 1990. I celebrated by working on my Laura Palmer Halloween costume and carefully studying Lara Flynn Boyle’s curls on the cover of Rolling Stone—“The Women of Twin Peaks” was the magazine’s October 4, 1990, cover story—in order to get my Braun cordless curling iron to replicate them as best it, and a ton of Final Net, could do.

While my love of Twin Peaks remained strong, viewership for the show’s second season declined. It changed nights several times and pre-emptions because of Gulf War coverage, as well as a loss of viewer interest after Laura’s killer was revealed early in the season, didn’t help. The final episode of the show aired on June 10, 1991. My heart was broken, like that cheesy locket Laura wore around her neck.

A year after the second season ended, the film Twin Peaks: Fire Walk with Me, a prequel to the series, was released to mixed reviews. Happy to be back in Twin Peaks, I spent 1992 in a theatre watching the last seven days of Laura Palmer’s life, or Singles, which was also released that year. Shout out to the Pacific Northwest!

Every January for the past 10 years, I have returned to Twin Peaks with an annual re-watch of the entire series, although, full disclosure, I often fast forward through some of season two’s more unfortunate storylines (Is there anyone who thinks, “Gosh, I wish that James and Evelyn Marsh mess had gone on for longer?”). I look forward to both the trip back to Twin Peaks and to my teen self.

When it was announced in October 2014 that Twin Peaks—along with Mark Frost and David Lynch—would return to Showtime for 18 new episodes I was happier than Cooper with a damn fine cup of coffee. But, I wondered what Lynch’s world look like 26 years later. Would Cooper be spending his days updating his Pinterest board with pictures of cherry pies? Would we finally find out how Annie is? Would Nadine and Mike be married with five kids, all possessing super human strength? It was anyone’s guess what would happen and who would return when it all started happening again.

While Twin Peaks changed television—its influence can be found in everything from The Sopranos to The Simpsons—a lot has changed since the show went off the air in 1991. Could Lynch’s surreal storytelling and movie-like approach survive in the age of binge watching and reality television?

Like the Log Lady’s log, I tried not to judge, but I was worried the show wouldn’t hold up for viewers, including me. I recently tried to watch Lost—a show heavily influenced by Twin Peaks—but abandoned it after one polar bear too many. Twin Peaks was already over by the time the internet launched in the summer of 1991 and I wondered what effect social media would have on the show now that it would have a hashtag.

When the first episode of the new season aired on May 21, it felt like a high school reunion. Characters had gotten older and greyer (shout out to silver fox Bobby Briggs!), while some had died or would die over the course of the season. Even if time works differently in Lynch’s world, the Log Lady’s “Hawk, I’m dying,” served as a powerful reminder that, linear or multi-dimensional, time marches on and sooner or later we will all be gone. (I have already updated my Will to ensure I don’t come back like David Bowie’s I’m A Little Teapot.)

Some reunions were emotional, like seeing an old friend. I cried when Agent Cooper (not Dougie or Bad Cooper a.k.a. Booper) finally returned near the end of season three. The last time many viewers saw Cooper was 1991. It was fitting that the musical guest for the episode was Eddie Vedder, a man many people haven’t thought about since 1991.

While I grew impatient with some of season three’s episodes—do not say the name Wally Brando to me—it was also comforting to be back in Lynch’s world. I remembered that feeling of wanting to figure it all out, but also wanting to sit back and enjoy the ride. I had to remind myself that in Lynch’s world nostalgia doesn’t mean wrapping everything up neatly at the end of an episode, or even 26 years later.

Some things in Twin Peaks were certainly different in 2017. The Roadhouse got a hip new music booker, the Double R was a franchise, and Ben Horne used the words “respect” and “women” in the same sentence. Sadly, Lynch’s treatment of women was the same. The new season included several scantily clad young women who died horrible deaths. The shot of Darya lying dead on a hotel bed in her underwear, a pillow over her head, was especially disturbing.

Women were often portrayed as bumbling bimbos—Lucy not being able to use technology wasn’t cute then and isn’t cute now—or as screeching hysterical wives, like Janey-E Jones and Doris Truman. Throughout season three, Lynch’s Gordon Cole interacted with women like the drunk creep at the office holiday party who tries to get all the young ladies to sit on his lap and tell them what they want for Christmas.

Lynch has never been celebrated for his diversity and while Twin Peaks in 1990 was a place where the birds sang a pretty song, it was also a very, very white place. Lynch’s idea of racial diversity was to dress Catherine Martell as Mr. Tojamura (yikes). In 2017, things weren’t much better. There was one woman of colour in Twin Peaks season three and Lynch made her a sex worker who spends most of her screen time naked. There is an Asian woman too, but her eyes are sewn shut and she spends a lot of time making weird moaning noises in lieu of speaking.

On Sunday, the final episode of season three aired, fittingly titled “We’re Going Home.” While the episode left us with more questions than answers (18 more please!), it was also the last hour we would spend in Lynch’s world. The trip was over, and like any journey ending we were left was sad, hopeful, and with a lot of stuff to unpack.

Lisa Whittington-Hill is the publisher of This Magazine. She writes regularly about pop culture for the magazine.