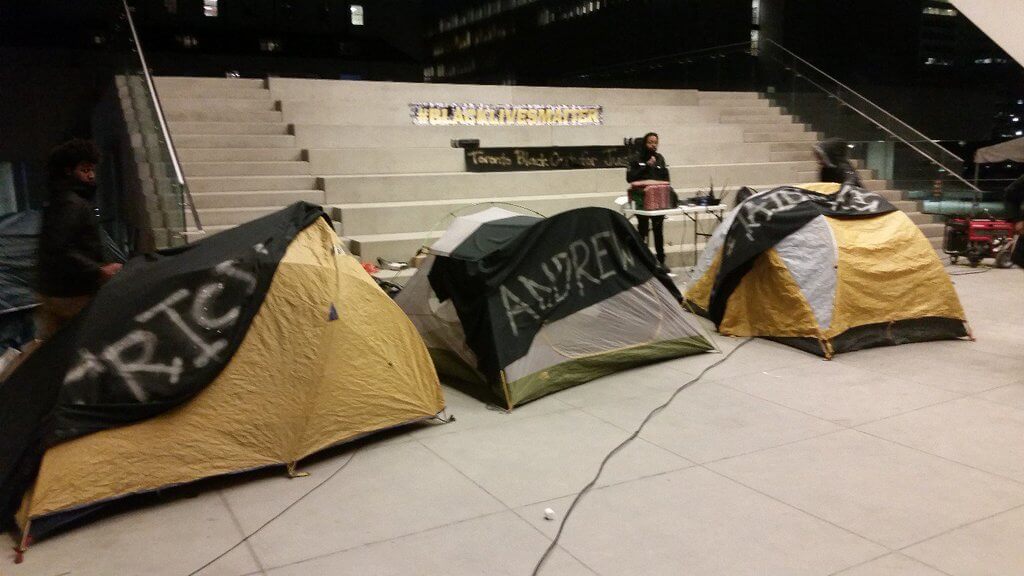 Last year, Black Lives Matter Toronto concluded #BLMTOtentcity, a 15-day occupation of Toronto Police headquarters. What began as a protest against the death of Andrew Loku, a Black man shot and killed by Toronto police in July 2015, became a public retrospect on the reality Canadians love to ignore: We too have a police violence problem. Our systems of law enforcement are predicated on the incessant criminalization, re-enslavement, and macabre disposal of Black bodies.

The tent city was initially planned as a City Hall campout that would last mere hours, but when officers arrived, we moved to Toronto Police Headquarters. On the first night there, the police attacked protesters, kicking, punching, and raiding the area. In a show of defiance, we stayed put and protested for more than two weeks. Through #BLMTOtentcity, Black Torontonians organized in a scale not seen since the 1992 Yonge Street Riot, a response to the growing number of Black men killed by police. Tens of thousands of people participated in demonstrations, direct actions, and arts-based community healing spaces. For the first time in a generation, the struggles of Black Ontarians captured the world’s attention. Our stories were being told to millions—from news stations to Twitter feeds across the globe.

#BLMTOtentcity was about the reclamation of a space that carried our community’s trauma. It was a manifesto of how we envisioned a close-to-utopic Black-centric space: everyday people curating their own liberation, activism from a transfeminist lens, and solidarity with Indigenous communities.

A year after #BLMTOtentcity, 25 years after the Yonge Street Riot, and centuries after the creation of Canada’s first policing institution, our issues remain unchanged. Black communities continue to be police targets. The public remains desensitized to alarming rates of racial profiling, sentencing disparities, and death by trigger-happy cops. It has become norm for our slain bodies to be flashed across screens—Black bodies killed during routine traffic stops, in their homes, in front of their families, and in most cases, with little to no consequence for the officers who kill them.

This crisis is exacerbated by police-violence deniers, coordinated campaigns by police sympathizers, and police associations who insist this is a problem exclusive to Americans. These myths negate evidence that paint a very different picture: In 2017, police continue to terrorize Black communities and act with impunity.

Today, Black people are still being carded in Ontario. Carding, or arbitrary street checks, allows police to criminalize Black people simply for being. Once in the system, a person is seen as known to police, even when there’s been no arrest. Their file expands each time they are carded. Carding victimizes thousands of Black Ontarians, stripping them of their dignity and right to presumed innocence. The police claim carding was necessary to fight crime, a position they have yet to prove with any data.

The province responded to the global condemnation of the act by promising its ban, but instead established regulations, which came into effect this year. In reality, the “ban” on carding is simply a set of bureaucratic policy that amount to a how-to-guide for the practice’s continuation. Under the new regulations, the police must give a reason for stopping civilians and inform them of their right not to give identifying information. This means that as long as an officer presents a plausible reason for stopping civilians, say a theoretical crime in the area, then one can still get carded. Additionally, regulations do little to curb racial bias within police forces. In Ontario, the police continue to target Black communities, as evidenced in the case of 15-year-old Devonte Miller Blake and 10-year-old Kishwayne McCalla, who were stopped on their way home from school by seven (yes, seven) police officers pointing guns at their faces simply because they “fit the description” of a criminal suspect.

Twenty-seven years ago, Black activists pushed for civilian oversight of the police. The SIU was created and lauded as the provincial police watchdog, with a mission to “nurture public confidence in policing by ensuring that police conduct is subject to rigorous and independent investigations.” In reality, the SIU’s record proves otherwise. Under the SIU’s watch, there has been a dearth of police officers charged and barely any convicted. Of 3,400 investigations, 95 have had criminal charges laid (less than three percent), 16 have led to convictions, and only three have served time.

School resource officers facilitate the school-to-prison pipelines. Over-inflated police budgets are the largest line items in municipalities. Anti-violence task forces continue to rip apart Black communities. It is within this context, and in response to the abhorrent conditions that Black people are expected to live in, that Black Lives Matter Toronto organizes, drawing on the brilliance and strategies of past Black liberation movements.

In retrospect, #BLMTOtentcity was a desperate plea from people who have had enough, who were tired of having their issues brushed aside. #BLMTOtentcity was not just a protest, but a vision for a world free from state-sanctioned violence. Perhaps most important, #BLMTOtentcity showed us that we could indeed win, there can be an end to police brutality.

We have more work to do.