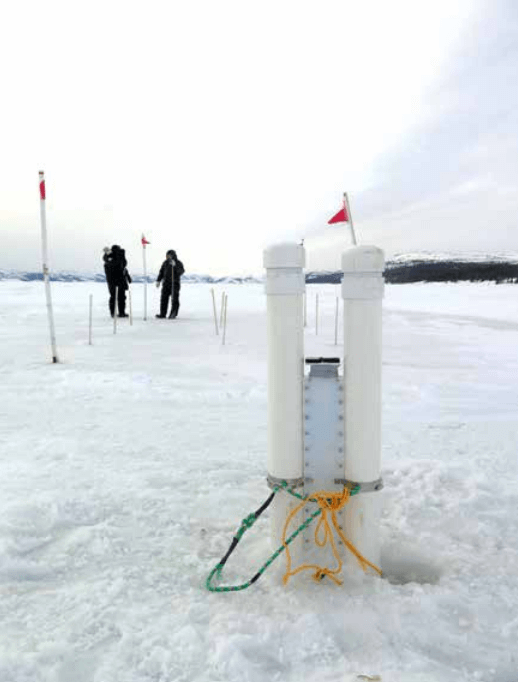 The Inuit of Pond Inlet, Nunavut, have been navigating the sea ice for centuries, relying on their experience and wisdom from their elders to inform when and when not to travel across the frozen mass. But as global warming intensifies, the ice is becoming increasingly unpredictable and unsafe. Now, a project out of Memorial University in Newfoundland is working to change that.

“My colleagues and I wanted to help our community and try to address their concerns about the Arctic sea ice conditions,” says Andrew Arreak, a Pond Inlet resident and research coordinator for the project. SmartIce, a collaborative initiative between the Inuit community, the Nunatsiavut government in Newfoundland and Labrador, and Memorial University, uses high-tech sensors to monitor and track changes in sea ice, making it much safer for locals to tread upon.

During the uncharacteristically warm winter of 2009–10 a community survey conducted by the government found that one in 12 locals fell through thinning ice in Nunatsiavut, and more than half of the residents could not travel across the ice to collect wood to heat their homes.

Sea ice has been a leading protagonist in shaping the lives and culture of the Inuit, and understanding it has been a skill passed down from generation to generation. “Initially, my community was very concerned about the SmartIce project,” says Arreak, noting that they were apprehensive to replace their traditional wisdom with technology. “So I started listening to them and asked how they would like me to work on the project.”

The feedback helped inform the current iteration of the project, which uses sensors stored in floatable plastic tubes that monitor danger zones identified through community feedback. Data is then collected via electromagnetic waves in the ice, producing an accurate reading of its thickness. The beauty lies in the simplicity of the gadget, which visualizes data through user-friendly maps where orange means “caution” and red means “stop.”

Besides Pond Inlet, SmartIce is being piloted in Nain, Labrador. For their work so far, Arreak and his team were recognized with an Arctic Inspiration Award, the “Nobel of the North,” which came with a $400,000 prize.

“It’s good to see the community embrace SmartIce,” says Arreak, who emphasizes the importance of community ownership over the development and implementation of the technology. “We can go back to predicting ice conditions better, and making life safer.”