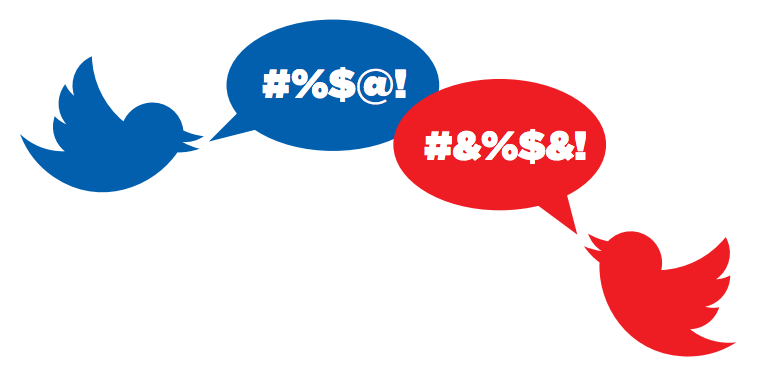 On the morning of the U.S. election last November, I logged onto Twitter and spent several hours arguing about privilege—mostly white, but also male—with someone who believed the entire concept was, itself, racist and sexist because he “judges people individually,” systemic issues be damned. As often happens, the discussion devolved to me calling him “willfully obtuse” and 20 minutes later, “fucking stupid.” I’m not terrific at debating, but I am fairly certain of two things: privilege is real and nobody has ever been convinced of that on Twitter, even without name calling.

We all know how that day ended: with the the unfathomable, terrifying, and depressing culmination of a campaign that saw a brick heaved through the Overton window, followed by a molotov cocktail and several bags of dog shit. On November 9, several tech companies woke up wondering just what role they played in getting a neophyte demagogue elected to the office of President of the United States. Twitter, for its part, finally had to take a hard look at its service and its contribution to public discourse.

Its approach up to that point was mostly to avoid the question. Sure, they locked out “alt-right”1 nihilist haircut Milo Yiannopoulos, but the cesspool of humanity he controlled just kept on keeping on in their unceasing war against “cuckservatives” and “libtards” alike. After the election, Twitter admitted its staff were having “challenges keeping up with and curbing abusive conduct,” added new controls for shielding oneself from such conduct (really, just a slightly more sophisticated version of the Twitter mute button), and started shutting down some of the more egregious “alt-right”2 accounts. Delightfully, this caused several terrible people, such as actor-turned-racistuncle-to-the-entire-internet James Woods, to leave in a “free-speech” huff. But former “Imperial Wizard of the Ku Klux Klan” David Duke still gets to tweet, so let’s call the effort inconsistent at best.

Twitter is motivated to try and fix things. Last fall there were rumours that the company could be bought by Google or Disney or Salesforce or Microsoft, but nothing ever came of it. Which is fair—who wants to assume that much liability? Meanwhile, its problems seem like a more focused version of the web at large, where newspapers are shutting down comment sections and at least one major advertising network is pulling its service from sites such as Breitbart.

It’s getting easy to start thinking that maybe the entire internet was a terrible idea, and Twitter encapsulates that perfectly. The things that make Twitter fun and addictive—It’s instant! It’s pithy!—also strip complex subjects of any kind of nuance. Twitter rewards snark, invective, and cynicism, lighting up your brain like a slot machine every time someone clicks “favourite” or “retweets” you. More than anything, Twitter feels like all of the loudest people—including me—yelling at each other. Sometimes in agreement, sometimes in disagreement, but always, always yelling.

Could I be a better at debating issues with people on the Internet? Sure. It would just take a little patience, some empathy and a concerted effort to fight every instinct I have while scrolling my feed. But even then, I’m not sure I could convince the willfully obtuse or the fucking stupid that systemic racism and sexism actually exist.

Twitter, for all the time I spend on it—and genuinely enjoy it—just might not have the gestell for grown ups to talk about grown-up things. I suppose that’s why someone like Donald Trump enjoys it so much.

1 The “alt-right” is a big tent of awful people, including racists, misogynists and other assholes. Yiannopoulos’s specific brand of altright is the narcissistic pseudo-intellectual who gives the appearance of wanting to watch the world burn, but is really too shallow to care about much beyond their own microfame among white guys with bad opinions about ethics in video game journalism.

Tyler Hellard lives in Calgary and handles tech support for his entire extended family. Follow him on Twitter: @poploser.