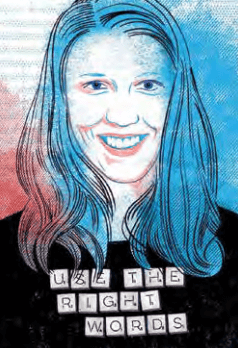 Today’s media climate is rife with increased—but not necessarily better—reporting on sexual assault and rape. That’s why, in December 2015, Toronto-based organization Femifesto and its collaborators created Use the Right Words, a guide to help journalists report respectfully, progressively, and accurately on stories addressing sexual violence. We sat down with one of the main writers, Sasha Elford to discuss how the guide was created, why, and what the response has been like in the year since its debut.

How did Femifesto and the idea for the Use the Right Words guide come about?

We’re a Toronto-based collective that was formed in order to work on shifting the culture to consent culture. So our first project was the Use the Right Words guide. It began because we were seeing more conversations about sexual assault in the media during a time of really high-profile cases. We were inspired by similar work in the U.S.—media guides that helped journalists report on issues like sexual violence or domestic violence against women in a way that’s supportive and that won’t be seen as blaming survivors of violence. We started the Use the Right Words project to create something that was applicable to the Canadian context.

Who worked on the guide and decided what to include?

We first started crowdsourcing feedback in 2013. We tried to get as many people involved as possible and were really surprised at the number of journalists who were willing to speak with us. The version that we have now is the finalized version. We wanted to make it as inclusive and all-encompassing as we could. It started out as being about language, but became a lot more comprehensive. It was the advisory committee that really informed this guide, particularly lawyers, journalists, journalism professors, students, abuse survivors, sexual violence advocates, and activists. They all had really diverse experiences and knowledge that helped in terms of figuring out what journalists are able to say, the culture of newsrooms, and what survivors would prefer.

What kind of response has the guide got from the public?

It’s been really positive. When we published the guide we also simultaneously launched the Use the Right Words campaign on social media. We encouraged people to share when they saw any type of news article that is using harmful language in terms of survivor shaming or survivor blaming and to fix the headline. If you take a look at the hashtag you’ll see lots of people calling out different instances of this—when using different language would be just as accurate, but much less harmful. It’s really amazing to see others really taking it on.

What is your long-term goal for the guide?

Our vision would be to have this guide in every single newsroom in Canada because it is such an important resource and one that is so informed by journalists. We have often been told that it’s not necessarily that journalists are trying to be harmful towards survivors or that they are inherently promoting rape culture; it’s that they don’t necessarily always have the tools. A lot of the language that media uses is ingrained into the traditions of journalism. That’s why it’s such an important goal of ours to have journalists, editors, and key players in media organizations engage in these conversations and talk about these stories.

Can you explain what the harm can be in using the victim narrative?

People have the right to define how they want to identify. So for some people the word victim will really resonate with them because they feel that they’ve been victimized. It’s often the first word that we use when we describe those who have experienced sexual violence. At the same time, many people feel that the word victim has negative connotations. It can denote a really tragic person who is defined by the violence that they’ve experienced. In reality, people who have had violence perpetrated against them are full people with complicated lives; the violence is just one thing that happened to them. This is why many prefer the word survivor. It acknowledges they survived a violent event, but it does not define who they are. It’s important to let each person decide for themselves.