Robert Eggers, writer and director of The Witch makes no secret that the film relies on fairytale versions of witches. It also relies on historical documents of actual witch trials. “I was sort of like, ‘All right, in all of these accounts of witchcraft, be [they] historical accounts of actual witchcraft or folktales or fairy tales, what are the tropes that always happen in every single one? What are the ones that speak the most personally to me? Those need to be in the film’,” he tells writer Lauren Duca in an interview with Vulture. The filmmaker, who grew up in New Hampshire and frequently visited Salem, did his research on the persecutions of witches in the 17th century and it shows in this movie, from the animals featured to the apple spat-up by a seemingly possessed boy. And the good ol’ sexism we all see today.

It is important to keep in mind that any records of witch trials were written by the inquisitors of such trials, the voices of the executed women have not, and cannot be for obvious reasons, been shared. Cotton Mather, a historian Eggers referenced in particular, is an author of such records. A Puritan minister, Mather believed New England was a battleground for Satan. His 1689 book Memorable Providences is considered to have laid the groundwork for the Salem witch-trials, and his Return of the Several Ministers perpetuated the hysteria constructed against women’s rights. I didn’t find the movie scary, but maybe that is because I am familiar with sexism. Sit on a rape trial and see how the victim is treated, then compare it what she is accused of—“she was dressed a certain way”, “she is trying to hurt him”—in these trials against women. Not much has changed. If viewers are not familiar with witch trials they may think the horror is the murdered baby or the scary goat, but the true horror is the condemnation of a teenage girl.

The movie begins in Massachusetts, Puritan New England in 1630. Calvinist William is banned from his and his family’s hometown. He doesn’t mind because he doesn’t believe the town is Christian enough anyway. His wife and three younger children stand in solidarity with the patriarch. Their baby is a baby so what they say doesn’t count. Their teenage daughter, Thomasin, looks like she is reluctant to go. But her parents physically pull her with them and she too is forced to go live with them outside of the woods. Soon after the move, Thomasin is shown playing with the baby boy, Samuel. After opening her eyes while playing peek-a-boo she sees that Samuel has gone missing. Her father believes a wolf got their son and moves on pretty quickly—life spans weren’t exactly long during the 17th century anyway. After Samuel goes missing we see how the mother, Katherine, resents Thomasin. Samuel was not baptized and this especially upsets the religious mother, convinced her son has gone to Hell. This resentment increases throughout the film, especially so after the older son, Caleb, goes missing too.

Thomasin is accused of being a witch by her two younger siblings, twins, as well as her mother. She is accused of infanticide, making the crops go bad, and theft. What she is really being punished for is reaching puberty. The persecutions of witches began in the 14th century, according to Caliban and the Witch author Silvia Federici. They were a means to control the power of women, with a focus on their reproductive powers. They were also seen as a social cleansing of subversive women. In one scene Caleb is blatantly staring at his sister and sexualizing her. Yet, it is seen as her fault for merely existing as, what we would refer to today, a teenage girl. 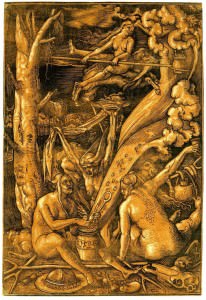 This woodcut piece by Hans Baldung Grien called the Witches’ Sabbath is an example of the propaganda used to execute women as witches. This propaganda was one of the first uses of the printing press.

After Samuel’s disappearance Katherine forbids anyone from going in the woods. William secretly goes into them with his son Caleb anyway. With Caleb’s new comfort with the woods, he goes into them alone in search of Samuel. Caleb goes missing and returns seemingly possessed. The blame for this is placed on Thomasin. Witches were often blamed for harming men, as have feminists. Many of us have read the televangelist Pat Roberts quote from 1992, “The feminist agenda is not about equal rights for women. It is about a socialist, anti-family political movement that encourages women to leave their husbands, kill their children, practice witchcraft, destroy capitalism and become lesbians.” Witches were also blamed for ruining crops. Federici writes about the food riots following the expropriation of land and the primitive accumulation, which started in the late Middle Ages. These riots were lead by women. When food prices went up, riots ensued. Witch persecutions happened more frequently during these times, in order to punish women for their resistance. The justification for these persecutions was fueled by state propaganda telling stories of witches sucking cows dry of their milk, or stealing food from the wealthy.

It was William who forced his family to live outside of town, off their colonial plantation, which resulted in a poor environment for food growth. It was William who introduced Caleb to the woods. And it was William who sold his wife’s family heirloom, a chalice. But, he let Thomasin take the blame. William is very much a symbol of the patriarchy and Thomasin is a symbol of how women are a scapegoat for blame of the patriarchy’s faults. At best, he was going to sell his daughter to another family as punishment. At worst, he tries to kill her.

There are only a few times where we see the witch in the woods. She is the kind of witch we are used to seeing, not the more accurate portrayal of a socially-constructed witch like Thomasin. The first time we see this witch she is an old lady, bathing in the blood of baby Samuel. Old witches are nothing new. We see and hear of them in fairytales like Snow White and Sleeping Beauty. These characters serve to regulate a woman’s worth according to age, and the patriarchal ideal family. Notice how stepmothers are always shown as evil? This is because they disrupt the Standard North American Family. These old ladies are seen as being envious of the young and beautiful (I’ll get you, my pretty).

Old women were often persecuted as witches because they were seen as no longer useful; they were punished simply for living passed their reproductive years. This is not something of the past—just look to modern movies with 20-year-old actresses being cast as the wives of 60-year-old men. Another time we see the witch in the woods, she is a young woman, showing off her cleavage while seducing poor, young Caleb. The woods themselves are often used in witch stories because they represent a communal way of living, which is deviant to the capitalist-patriarchy.

Other symbolisms used in the movie are animals, blood, and apples. Animals are often linked to witches as their familiars. A familiar, like a hare, raven, or goat—all used in the movie—is said to be a gift to a witch from the devil. In one scene we see a witch feeding a raven from her breast, this is a narrative typical in witch propaganda to vilify women without children. The apple is also common in stories of women. One obvious example is the story of Adam and Eve, though the forbidden fruit in that story is never actually said to be an apple. Fruit is known to be a symbol of fertility, which makes a woman sexualized, and in the eyes of the patriarchy, evil. There is also said to be a link with the legendary Isle of Avalon, an island of witches, named for an ancient Welsh word that stands for afal, meaning apple. Thomasin does speak with an evil goat in the end, but before she does, it is the twins who speak to it. It was thought that women were feeble-minded, like children, and were thus more susceptible to evil.

In the end we see Thomasin joining a group of naked women in the woods. Women friendships were punished in the time of witch-trials and still are socially today. In an interview with Forrest Wickman for Slate Eggers says this is not proof that Thomasin was a witch all along, “No offense, if that was anyone’s reading, but for people who think Thomasin was evil all along: ‘Once upon a time there was a story of a witch’—that’s the movie, and that’s not a very interesting story. So I will say that much.”