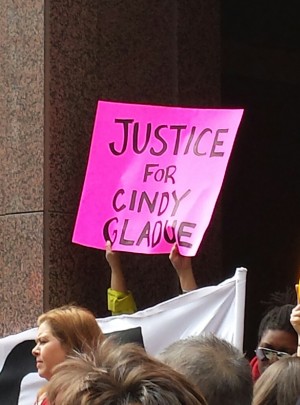 Just after noon on April 2, the crowded bodies rallying outside of the Ministry of the Attorney General at 720 Bay St., Toronto (one of many like rallies being held across the country) were told that prosecutors were appealing the acquittal of Cindy Gladue’s alleged murderer. The joy from this news did not completely subside the nation’s outrage, nor should it.

Gladue, a 36-year-old Indigenous mother, died four years ago after spending two nights with Bradley Barton in an Edmonton motel room. Gladue was a sex worker in Alberta and Barton says she died as a result of consensual rough sex. The sex worker was found with a 11 cm vaginal wound. Prosecution believes the wound was caused by a sharp weapon, while Barton insists it was only his fingers. The event page for the April 2 rally reads: “Cindy’s death is a reminder that Indigenous women’s lives and sex workers’ lives are not valued in this deeply racist, sexist and misogynist society.”

A deeply saddening fact is that what has happened to Gladue, as a sex worker and as an Indigenous woman, is not uncommon. When called upon to perform a national inquiry into missing and murdered aboriginal women Harper has said it is unnecessary, as it is not, in his opinion, a sociological phenomenon, nor is it on his radar.

This case got extra media attention for not only an unfair verdict, decided upon by a jury without a single Indigenous member, but also because of the precedent it set in terms of evidence. Gladue’s reproductive organs were used as court evidence. Julie Kaye, an assistant professor of sociology and director of Community Engaged Research at The King’s University in Edmonton tells CTV that the use of Gladue’s preserved vagina as evidence brought to the courtroom was another violent act, “I think it’s important to recognize that, as her body was placed on display, that was seen as a very dehumanizing act.”

Gladue was victimized, by her murderer and the Canadian justice system, for being both Aboriginal and a sex worker. Maggie’s Toronto, an organization run by and for sex workers, frequently reports cases of abuse against workers. For example, last week a man was arrested for robbing a sex worker. Three weeks ago media released stories about a woman being confined and sexually assaulted for five days. As an Aboriginal woman, Gladue is objectified sexually as an exotic Other. This is nothing new, just look at the controversy surrounding Adam Sandler’s new movie, in which Native American women are named No Bra and Beaver’s Breath. The actors who walked off the set were  told they were too sensitive and didn’t understand the joke. A joke that comes from, and reinforces, the sentiment that Aboriginal women are meant to be sexualized and dehumanized, which is, incidentally, the same rational behind ignoring the cases of Canada’s missing and murdered Aboriginal women.