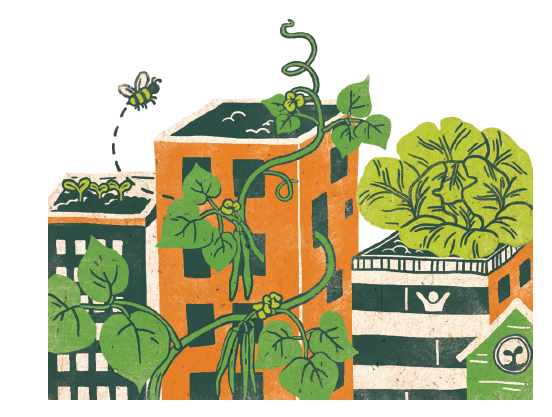 Once taken for granted in most societies, including North American ones, the lively and dynamic connections between the sheer physicality of food and the imaginative realm of culture were thrown under the food truck in 1954. That’s when Harvard University and the U.S. Department of Agriculture teamed up to launch a seminar on a new word coined for the occasion of a new food system: agribusiness.

This new term dramatically reframed many things food-related, not least the way culture and food were erased from the picture. Gone was the idea of agriculture—a term that recalls ancient Rome’s cultivation of fields (fields are the Latin-based agri in agriculture). Agribusiness said it like it was, and identified food products as commodities that came to consumers through a supply chain made up of large corporations that handled every detail from farm inputs, processing, distribution, and retailing to the prep work prior to heat and eat.

Ever since agribusiness devoured the space for agriculture, the relationship with a living and public food culture has been kept to the sidelines of the food system. As in days of old, people still celebrate major holidays and life events with food—all the better to sell you commodities, my dear—but food no longer has a place at the table of how place, tradition, identity, connection, generosity, conviviality, commensality, competence or personal power, responsibility and spirituality are measured, understood, entrenched and supported.

Of course, though agribusiness is a workhorse of a word, it’s not the word itself that singlehandedly pushed aside notions of music and culture as the food of life (as Shakespeare once intimated). We can also, and largely, pinpoint the way in which the entire logistics of the food industry was restructured—sidelining culture along with other unproductive (i.e. not commodity-producing) elements of social well-being and cohesion.

Absent culture, the North American food system is one where few can grow or cook food from scratch; where half the population do not know when to start or stop eating and are either therefore seriously overweight or underweight; in which few believe that food should be thy medicine and medicine thy food; where a quarter of all meals are eaten alone in a car, at a desk, or in front of a TV; where labels are necessary in order to know where the food came from and what it contains; where foods can be advertised as low-fat, low-sugar, or low salt, all referring to the conditions under which the food was processed in a factory, not raised on the land or sea; or where donuts produced by a foreign-owned chain are something people line up for and treat as a signature of their national identity. If warning labels are worth the paper they’re written on, they should really specify “culture-free,” and the food safety term for “identity preserved” (a reference to the ability to track food travel along the supply chain) should be replaced with “identity gutted.”

The disappearance of culture from a food system is a sad thing to behold or bemoan. But the rescuing, reclaiming and updating of food-culture connections, a central if seldom-stated project of Canadian food movement activists, is as joyous and enlivening as political culture can get.

I’m ashamed to admit that I’m such a political economy geek that Susan Crean’s great 1976 book, Who’s Afraid of Canadian Culture, is about as close to participating in culture as I’ve ever come. But I know what I like, and I think Crean was bang-on to highlight the word “afraid” in her title. The ultimate expression of dependency and colonization, after all, is fear of going deep within to find the strength to recover personal power and to stand on one’s own—perhaps to fall—and have no outsider to blame.

Since Crean’s book came out, many Canadian cultural producers have come out of the shadows to win national and international acclaim for music, film, novels, photography, radio and television documentary, current affairs programming, alternative newspapers and journalism, and much more. But cultivation has barely started on the wellsprings of popular and high culture: a confident, engaged, empowered population imbued with a workplace culture of artisanal pride and competence, an informal culture of activity and participation, and a personal culture of grace, connection to place and responsibility for stewardship.

Food could play a starring cultural role precisely where it needs to be played—in the humble activities of daily life that prepare people to receive and produce cultural works of expansive imagination and creativity. I’ve been actively involved in the food movement for over 20 years, and I’m proud to say the food movement is at the forefront of reclaiming food as a site of a vibrant public culture and social customs in general. Yet, at the same time, because the public discourse and conversation around food so often obsesses around matters of nutrition and of disorderly misconduct (overweight, anorexia, gluten intolerance, all the ad nauseums), few observers have waxed on about a food policy agenda which is fundamentally cultural.

We can, I think, do better. Start with the word actionism, which comes from Michael Sacco, founder of ChocoSol Traders. Sacco and his merry band of social enterprisers import direct-traded cacao from Indigenous villages in forested areas of Oaxaca, Mexico, a center of vibrant Indigenous food culture and Zapatista-style politics. The imported cacao is processed in Toronto, using bicycle-power and adding ingredients grown on the organization’s roof and nearby farms, and then sold at farmers markets. A label declares it is not a product, cacao, but a relationship with Indigenous peoples of the Americas.

This is the style of hundreds of food-based social enterprises and civil society organizations: Eat the change you want to be; practice what you preach, while preaching and advocating for change. Sacco calls this full-spectrum approach to change-making actionism to distinguish it from activism—normally understood to mean demonstrating against the wrongdoings of the powers-that-be.

Sacco also came up with the term “inter-culturalism” to distinguish the world foods orientation of many in the food movement from mainstream multiculturalism—ordinarily taken to mean respect for distinctive customs of the huge variety of ethno-cultural groups that make up Canada. What Sacco and many food actionists promote is based more on actively sharing, learning and adapting from many cultures.

Such intercultural practice is the norm at FoodShare, North America’s most influential city-wide food security organization, which has based many of its programs on adaptations from South America— especially its signature Good Food Box program, based on farmers’ market baskets organized for people on low income in Belo Horizonte, Brazil.

First cousin to actionism is empowerment, which is the food movement’s strong suit. Critics may scoff at those who think the way to a better world happens one consumer purchase at a time, but the fact remains food offers everyone a range of 200–300 choices every day to eat healthier, more locally, more sustainably. Coffee double-double or black. Tea fair trade or not. And so on, all the livelong day.

And, please, don’t duck the issue of choice by saying some healthier choices cost more. Most cost less— less booze and less tobacco (both agricultural products, lest we forget), followed by fewer cheap meats, candies, and adulterated starches. With the savings, we can buy more whole grains and fresh produce. Let’s also try fewer foods from the store (mostly imported from afar, anyway) and more sprouts grown on windowsills, herbs grown on balconies, tomatoes on the roof, and squash and greens in the backyard.

The food movement popped its head up during the 1990s and started to grow like a weed after 2000. It is, dare I say, quintessentially post-modern and a product of the millennial generation. It has no formal program or organization. It is, as Vandana Shiva says, a movement of ands, not buts. But its starting point, I believe, is an understanding that food is many-sided. I liken it to a Rubik’s Cube that can’t be understood or solved on one side, but must link actions on six sides. One side relates to food safety and nutrition that produce health. Another to production, distribution and consumption patterns that produce environmental sustainability. A third to job-related income or sustenance. A fourth to community cohesion and identity. Yet another to equity and inclusion (sometimes called justice). And the final side to the grace and connection that flow from all the people and forces that have had their hand in bringing food to the table.

Each of those six sides requires a culture: either in the anthropological or sociological sense, relating to community; or in a spiritual and ethical sense that permeates a society; or in a deep personal sense that flowers from gratitude and connection. And, yes, it needs to be said: Culture is what’s good for what ails today’s food and all the people who want to liberate themselves from today’s food system strictures.

Wayne Roberts wrote this on his 70th birthday. He is the author of the No-Nonsense Guide to World Food and Food for City Building: A Field Guide for Planners, Actionists and Entrepreneurs.