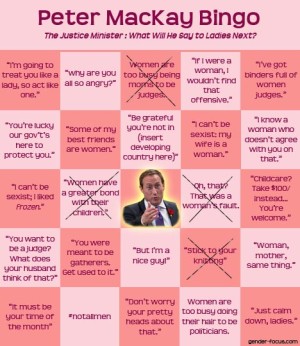 Good news: apparently all women have to do to get one of those old boys jobs, is apply. On June 13, Justice Minister Peter MacKay reportedly said, at a private Ontario Bar Association meeting, that women and minorities “simply aren’t applying” for positions in federally appointed courts. Simple. Director of the Metro Toronto Chinese and Southeast Asian Legal Clinic Avvy Yao-Yao Go says this isn’t true. After reading MacKay’s comments she became angry. In her 23 years as a lawyer, she knows many worthy candidates from minority groups who have applied, Yao-Yao writes in a letter to the Toronto Star. “Perhaps MacKay is counting on the fact that most women and racial minority lawyers who have applied for judicial appointment wouldn’t dare come out to prove him wrong,” she writes. “So let me be the first to acknowledge that I, too, have put in an application as an act of challenge with no expectation of ever being appointed, not only because I am a woman of colour, but more importantly, because my politics are not in sync with the current government.” Indeed, decision making in regards to the federal courts system is up to politicians. It isn’t shocking that a woman of colour who openly criticizes the Conservative government’s policies on immigration, refugees and poverty reduction feels this way. MacKay pointed to motherhood as one of the reasons women aren’t applying, reasoning moms have a greater bond with their children. The truth is less about this bond and more about traditional gender roles. Like the ones MacKay graciously illustrated with his Mother’s Day and Father’s Day greetings—you know, moms do the work and men shape the minds of our future leaders. Oh wait, he blamed a woman on his staff for that one. Yes, women do the majority of child rearing and housework. We are also hired less because of this, because even if we haven’t had children, we can potentially get pregnant, and will need to take a break because of it and may need future accommodations. Mothers will also need to find affordable childcare that exceeds a 9-5 day, and will need to decide if it is worth making less at a job where their male partner would make more. It is hard enough to get the opportunity to gain the education and experience needed for these top jobs—never mind getting hired. But hey, MacKay is on to something, maybe it is something as simple as we just don’t apply. Right, Avvy? It can’t be that MacKay is stuck in the 1950s, because, as his own wife says, he employs female staff members.