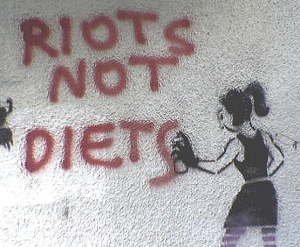 This past Saturday marked the first day of summer. The sunlight is lasting longer, vacations are planned, and we all feel a little of that last day of school excitement—even if we graduated over a decade ago. It is, sadly, also the time of year when some women not only shy away from the cool comfort of the pool, but stay uncomfortably wrapped up because according to that cheap weekly magazine next to the drug store cash register only thin women are allowed to have fun. And, it seems, no woman is thin enough. We may hear the truth from very reputable sources—ignore the scale, there is no one body type for a certain weight, food is good for you—but the counter-voice is often drowned out by the messaging ingrained in us from day one. So many of us cannot bring ourselves to put on a tank top, let alone a bathing suit.

To be 100 percent honest, and this is embarrassing to admit, simply writing this post is making me nervous. I’ve hated my body since kindergarten. I only became OK with it after the birth of my daughter six years ago. And still today I really wanted to skip breakfast—I’m having my picture taken this weekend. That is messed up. Very, very messed up. A healthy diet and a healthy amount of exercise is good, but no one should ever feel pressured into warping either one into excessive habits—like food restricting or working out too much. We especially shouldn’t feel pressured by an onslaught of advertising brought to us by companies that are invested in making us feel insecure. (Note: By “excessive” I don’t mean an eating disorder. There are too many complexities involved to include in such a general post.)

Before another warm season goes by wasted, remember that all that garbage we were force-fed by media and old-school traditional gender roles is not only harmful but unattainable. If it were attainable, the whole beauty industry would crumble. The average woman is not photoshopped, and does not employ an entire staff to keep her looking picture ready.

Media aside, women worrying about maintaining the impossible perfect figure is an old but effective patriarchal tactic to keep us obsessing over a mirror, too exhausted to go out in the world and cause trouble, like fighting for equal pay. 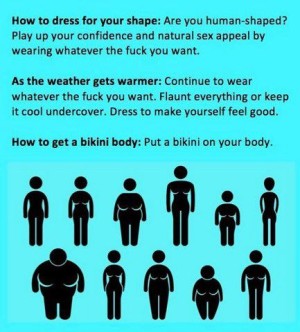 Nothing tastes as good as skinny feels? You’re not eating the right stuff.