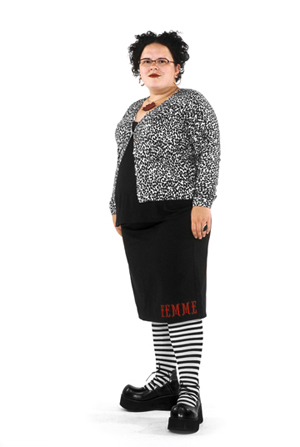 Almost 10 years ago, walking outside, Toni Latour and her then partner, who identifies as butch, would bump into others from the queer community. While people would acknowledge her partner, Latour  often felt like she went unnoticed. After more than one such experience, Latour, a Vancouver-based multidisciplinary artist and professor at both Capilano University and Kwantlen University, began to wonder if other queer femmes felt the same invisibility. Then, she proposed an art project to find out.

Representing Vancouver’s self-identified queer femme community, The Femme Project is a collection of 70-portrait style photographs accompanied by sound recordings of interview excerpts and wall-mounted quotes. Subjects represent individuality regarding age, ethnicity and fashion. They identified as trans, bi-sexual or lesbian. As one quote from the collection reads: “I am a black femme lesbian immigrant. I think I have it all covered.”

Latour prefaces The Femme Project’s written profile with a quote from Butch is a Noun: “Human beings, as a rule, are pack animals.  We seek the comfort and safety found in the company of commonality, the relief at being recognized for who and what we are.”

All women featured in the project discuss a similar feeling of exclusion and invisibility. “It’s important for people who identify as anything—including butch and femme—to have space, recognition, community, representation and shared common experience,” says Latour. “It provides a sense of belonging. A sense that we are not alone.”

There seems to be a persistent stereotype that envisions gay women as wearing combat boots and flannel, not summer dresses. The Femme Project instead highlights a more diverse truth (along with more diverse challenges): stories of growing up looking like all the other little girls, or having a mother feeling like they had no warning before their daughter came out. “I do not need butch arm candy,” reads another collection text, “to validate my performance of queer gender.”

So far, the exhibit has brought women together, creating a community where they feel they belong. “Identification with something, with a group, with an activity, with ethnicity, with geography, with sexuality—it creates bonds,” says Latour. “It creates value, it creates the opportunity for increased safety and visibility. It can be a collective force for positive change.”

When she began working on  The Femme Project, which was finished in 2010, so many women wanted to be a part that she needed to raise extra money in addition to what she received from the Canada Council for the Arts and the BC Arts Council. The Femme Project is currently on display—taking up all the main rooms—at Whitby, Ontario’s Station Gallery. It opened May 24 and runs until July 6, coinciding with World Pride.