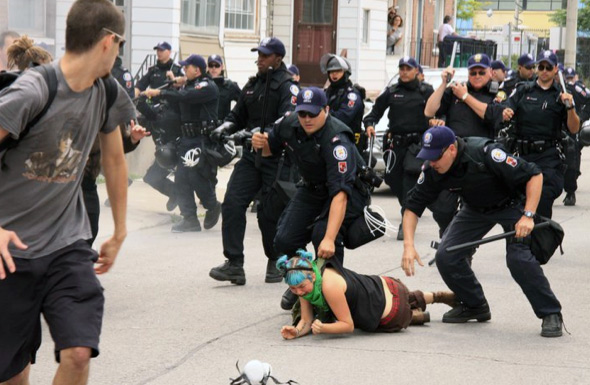 Lost in the revelations that are coming out about Canada allowing a foreign spy agency access to world leaders (and who else?) is the knowledge that we’re finally getting more information about what actually happened during the G20.

A fuller picture is emerging that adds embarrassing details to the already long list of offences committed by Canadian authorities. Now we know that not only did we host a summit that has historically brought protests, violence, and punitive security measures; we permitted the United States to spy on the leaders we were hosting.

Essentially, during this time did we cease to be a sovereign country?

Let’s look at what happened. The state did not protect its citizens from authoritative violence. Basic legal freedoms were denied to several citizens. Many of the human rights that we purportedly export through democracy to third world and developing nations were trampled. Both our government and at least one other government were collecting intelligence (almost certainly illegally). Our national anthem was not affected.

Craig Forcese, an expert in national security at University of Ottawa’s faculty of law told the CBC, “If CSEC tasked NSA to conduct spying activities on Canadians within Canada that CSEC itself was not authorized to take, then I am comfortable saying that would be an unlawful undertaking by CSEC,”

“We do not comment on operational matters related to national security. Our security organizations have independent oversight mechanisms to ensure that they fulfill their mandate in accordance with the law,”

All of this is troubling, but if there is a silver lining it’s that as documents continue to be released we’re finding out more about our government, and their secrets, than we ever have. It’s particularly important when these revelations shed light on one of Canada’s lowest moments, the 2010 G20 Summit.