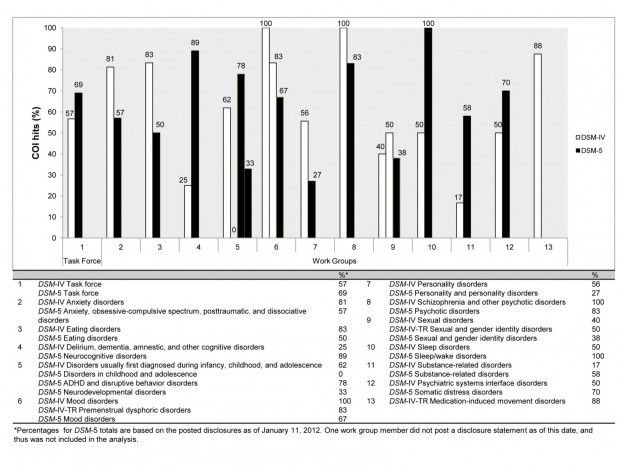 Financial conflicts of interest in DSM-IV and DSM-5 panelists. Courtesy of the PLoS Journal of Medicine.

The DSM-5 is the newest edition of the American Psychiatric Association’s (APA) Diagnostic and Statistical Manual—the book of mental illnesses. The tome has been around since the ’50s, and updated editions have reflected changing social norms— homosexuality was taken out in 1973.

Over its five editions, names have changed, symptoms have changed, and new illnesses have been added. This time around, a few things are raising eyebrows in the press and drawing lines between factions of mental health professionals and academics: the addition of a tantrum disorder in children, the amalgamation of Asperger’s and other autism spectrum disorders into one single spectrum, and premenstrual dysphoric disorder (basically extreme PMS). It’s a hard picture to piece together; conspiracy theories abound, and there’s a lot of finger pointing at good old Big Pharma.

The diagram above shows changes in financial conflict of interest in the panel members of the DSM-IV and DSM-5, and was published in the Public Library of Science Medicine journal in an essay entitled “A Comparison of DSM-IV and DSM-5 Panel Members’ Financial Associations with Industry: A Pernicious Problem Persists.” This sounds complicated, but trust me, once you get it, your eyes will pop.

Lisa Cosgrove and Sheldon Krimsky’s essay and diagram, published more than a year ago in March, compares data on panelists working on the DSM-IV and the DSM-5. The DSM-IV came out in 1994 and the DSM-5 was released earlier this year, with specific changes to the panel process to increase transparency, something the APA had been criticized for in the past. This edition panelists were required to disclose their biases; pharma-related earnings were capped at $10,000 in payment and $50,000 in stock holdings per year.

There has been academic and journalistic criticism of the disclosure decision: disclosing a bias doesn’t actually erase it. Knowing what the conflict of interest is doesn’t ensure the panelist is behaving more objectively under more scrutiny. And what kind of scrutiny are they under, anyway? In the sleep/wake disorder category of panelists in the diagram above, for instance, 100 percent had known financial ties to pharmaceutical companies. Psychotic disorder panelists were at 83 percent. Granted, panelists may be very knowledgeable about their category—having worked in both treatment and development—but they are overwhelmingly tied to pharmaceutical companies as well.

We are (hopefully) moving towards the destigmatization of mental illness, and away from the mental illnessization of stigma. But these days, it’s hard to know where the actual information lies. Where in 1973 homosexuality was de-pathologized because of changing social norms, it’s hard to see that happening these days, when the people writing the book on mental illness are so intimately tied to pharmaceutical companies with very specific economic agendas. The DSM, in the past, may have reflected the evolution of the study of mental illness. Now conflict of interest makes it too murky to tell. The numbers themselves are shocking, and only the tip of the iceberg.