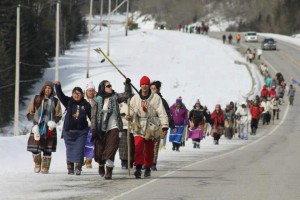 If you want Google Maps directions from Whapmagoostui, Quebec to Parliament Hill, Ottawa, our trusted search engine doesn’t know what to do with itself. That wasn’t the case for six Cree First Nation youths, who arrived at the capital on Monday. They trekked the 1,600km distance with the help of a guide to show their support of the Idle No More movement.

The Whapmagoostui community resides at the shore of Hudson Bay, Quebec. Led by David Kawapit, who turned 18 on the journey, the crew left home on snowshoes in mid January. The forecast was -58 on their first night. Along the way, close to 400 others from First Nation communities joined the walk, and the cause.

The journey parallels Chief Theresa Spence’s hunger strike in an attempt to meet with Stephen Harper. Spence survived on a liquids-only diet on Turtle Island for six weeks before Harper agreed to chat. The Cree walkers travelled for 10 weeks. Only this time, Harper never showed.

Green Party leader Elizabeth May was there, and said, “It says a lot that Stephen Harper isn’t here … It says a lot that we need to move heaven and earth to meet First Nations on a nation-to-nation basis with respect.”

Granted, our conservative Prime Minister is busy, and just because we fall under his regime doesn’t mean we dictate his itinerary. But when his government stubbornly and consistently ignores the rights of First Nations’, they have every right to demand his attention.

Harper is taking heat for being absent, welcoming the Toronto Zoo’s new batch of Chinese pandas who arrived via FedEx, the day that the walkers arrived. Sure, this trade may strengthen our relationship with communist China. But it was at the cost of showing the First Nations respect. Certainly Harper was aware that they were scheduled to arrive then, as thousands of others awaited their arrival atop Parliament Hill. It prompted this petition, requesting that Harper refrain from further pointless photo ops.

This matters because aboriginal injustice and the environment matter. The Idle No More movement can easily be described as a quest for equal rights and respect. The ending to this historical pilgrimage takes place at a peak of tension. Increased funding for First Nations has been budgeted for, but not delivered.

The Cree youths met with Aboriginal Affairs Minister Bernard Valcourt, who now says he plans on visiting in the summer. They left for home yesterday. For this trip, they took a well-deserved plane ride.