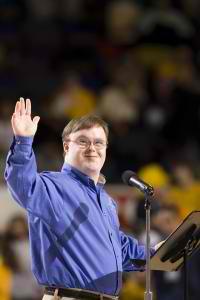 “Every day I get closer to living a life like yours.”

It was 2008 when John Franklin Stephens, who has Down syndrome, wrote those words, but their importance has not diminished in the four years that have passed. A Special Olympics athlete and global messenger, Stephens recently had to once again defend his humanity—and, it seems, the world is listening.

During Monday, Oct. 22’s American presidential debate on foreign policy, outspoken conservative political commentator Ann Coulter set the internet ablaze with her tweet that she approves of “Romney’s decision to be kind and gentle to the retard.”

Coulter meant for the tweet a to be a jab at President Obama. But for Stephens, it was a chance to set her, and the rest of the world, straight on using the r-word. In an open letter on the Special Olympics website, Stephens powerfully and succinctly outlines why using “retard” as an immature slur is so awful. And it has caught the world’s attention, with publications from Gawker and Jezebel to the Daily Mail and Huffington Post writing about it, commending Stephens. Here are his words, in full:

Come on Ms. Coulter, you aren’t dumb and you aren’t shallow. So why are you continually using a word like the R-word as an insult?

I’m a 30 year old man with Down syndrome who has struggled with the public’s perception that an intellectual disability means that I am dumb and shallow. I am not either of those things, but I do process information more slowly than the rest of you. In fact it has taken me all day to figure out how to respond to your use of the R-word last night.

I thought first of asking whether you meant to describe the President as someone who was bullied as a child by people like you, but rose above it to find a way to succeed in life as many of my fellow Special Olympians have.

Then I wondered if you meant to describe him as someone who has to struggle to be thoughtful about everything he says, as everyone else races from one snarkey sound bite to the next.

Finally, I wondered if you meant to degrade him as someone who is likely to receive bad health care, live in low grade housing with very little income and still manages to see life as a wonderful gift.

Because, Ms. Coulter, that is who we are – and much, much more.

After I saw your tweet, I realized you just wanted to belittle the President by linking him to people like me. You assumed that people would understand and accept that being linked to someone like me is an insult and you assumed you could get away with it and still appear on TV.

I have to wonder if you considered other hateful words but recoiled from the backlash.

Well, Ms. Coulter, you, and society, need to learn that being compared to people like me should be considered a badge of honor.

No one overcomes more than we do and still loves life so much.

Come join us someday at Special Olympics. See if you can walk away with your heart unchanged.

A friend you haven’t made yet, 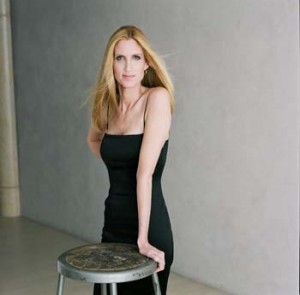 What Stephens did is admirable. While Coulter’s comment surely enraged him—and many others—he responded with maturity, poise, and intelligence. It would have been easy to reply in the heat of the moment, lashing out at Coulter, thus sinking to her level. Instead, Stephens acted with the utmost dignity. He was forward and brave with his words, laying blame where blame was due. But he was also honest, sincere, and sensitive, explaining exactly how using the word “retard” as an insult hurts him so much. The letter is both heart wrenching and heartwarming, outlining how Down Syndrome has affected and shaped Stephens’ life.

“I get the joke — the irony — that only dumb and shallow people are using a term that means dumb and shallow,” Stephens wrote in his 2008 Denver Post piece. “The problem is, it is only funny if you think a ‘retard’ is someone dumb and shallow. I am not those things, but every time the term is used it tells young people that it is OK to think of me that way and to keep me on the outside.” And that’s the real shame. Because if anyone deserves to be excluded, it’s Coulter.