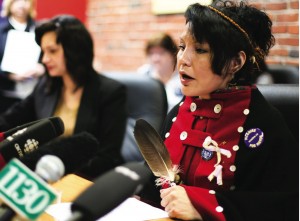 What would justice look like for B.C.’s Missing Women Inquiry?

Note: An earlier version of this story made reference to a photo of one man hogtying and holding knife to a woman’s throat.  Information has since revealed the identity of that man was not, in fact, Cpl. Jim Brown. This Magazine apologizes for any embarassment or confusion caused by the error.

Now overgrown and derelict, even a decade ago Robert “Willy” Pickton’s property felt like ghosts were reaching out of the ground. Crying for attention.

That’s the recollection of Bill Hiscox, one of the serial killer’s employees, from Pickton’s Port Coquitlam, B.C. pig farm back in 1998—where DNA of 33 women, mostly indigenous, was found. Pickton confessed to killing 49.

“There was something not right there,” Hiscox says, describing piles of women’s clothing he saw outside Pickton’s trailer, and Indian status cards his sister-in-law found inside. But his attempts to tip police were rebuffed.“It’s almost like people were trying to reach out, ‘Oh, we’re here.’ Kind of a turning, wrenching feeling where you know something’s wrong.”

Ten years after Pickton’s arrest, disgust at his crimes has crystallized into rage. Rage at the police, for ignoring tips and missing person reports. Rage at the justice system, for failing to catch him sooner, then dropping 20 of his murder charges. And now, rage at the very public inquiry his victims’ families sought for years.

“We need to get the answers,” says Lillian Beaudoin, showing a picture of her sister, Diane Rock, who was killed on the farm. “We will get to the bottom of this, to find out why they did what they did. We fought hard and we’re still fighting hard. There’s so much hidden in the closets with this Pickton case, it would go on for a century.”

Cover-ups and closets? Hiscox—who was barred from testifying despite lawyer requests—concurs, with unflinching certainty.

“They’re covering up a lot of stuff, and I just can’t fathom some of the things being says here in this inquiry,” he says. “The truth will set you free. We’ll see what happens.”

In June, the Missing Women Commission of Inquiry (MWCI) concluded 92 days of public hearings. The province’s appointed Commissioner, Wally Oppal—who as ex-Attorney General had overseen the controversial dropping of charges—will submit his final report on Oct. 31.

But the inquiry was marred by a mounting barrage of scandals, from baffling to sinister.

Starting with the province’s refusal to fund organizations’ legal counsel—leading to a mass boycott by Amnesty International, the Assembly of First Nations and others—the MWCI’s executive director was suspended after a string of anonymous sexual harassment allegations within its own ranks. Another officer testified that police were having sex with the very women Pickton targeted.

Oppal himself was lambasted for moonlighting as a serial killer victim in a slasher ﬁlm. He was later seen publicly embracing a Hells Angel (HA) member, despite banning discussion of Pickton-HA links: a club property across the road and, on the farm, Piggy’s Palace nightclub, the rumour of a buried HA member and the discovery of male DNA. “There are some that have been trying to bring the Hells Angels into this tragedy from the beginning,” says HA spokesperson Rick Ciarniello, dismissing “conspiracy theories” about his group. “[We] had nothing to do with the missing women.”

But amidst mounting controversy, Oppal would tolerate no rumblings of a conspiracy.

“If MWCI does not re-open the hearings, it will be perpetuating a police cover-up of the circumstances surrounding Canada’s worst serial killing case,” wrote Cameron Ward, lawyer for 25 victims’ families, on his website.

“Willy Pickton didn’t kill up to 49 women by himself,” Ward’s statement continues. “The women whose remains were found at the pig farm were likely the victims of a group of sexual sadists and torturers, who likely included convicted murderer Willy Pickton himself.” How many murderers, Ward asks, remain at large?

For Ward and others, such questions are essential to finding any semblance of truth or justice.

“This is a dirty shame,” says Bridget Perrier, whose step-daughter Angel Wolfe lost her mother to Pickton. “This was a sham, a waste of our time. In Canada, you’re allowed to murder by race and class. These women—these families—need justice.”

Suspicions of a cover-up grew even more pronounced when the Crown Prosecutor who dropped Pickton’s 1997 attempted murder charge—after a sex worker barely escaped, bleeding, from his farm—admitted her documents had been inexplicably destroyed.

“There’s so many unanswered questions,” says Michele Pineault, whose daughter Stephanie Lane was among those killed. “Look at all the documents they lost … It seems too convenient.”

“The report, in the end, is not going to be of any relevance or importance in the long run to us,” says Jeannette Corbiere Lavell, president of the Native Women’s Association of Canada. “How can we look on this as something positive—that might do some good—when there was too much of a cover-up?

“If I were to think of an actual outcome—a good, positive outcome—it would be for them to recommend a national inquiry.”

For Corbiere Lavell, justice would include ratcheting up accountability for Canadian police, who she says operate with virtual impunity. Such failures have brought Canada under the investigative microscope of both the United Nations and the Organization of American States.

“This inquiry is not going to really touch on key areas of racism, discrimination, delivery of services, access to justice,” she adds. “We talk about systemic racism right from First Contact. Aboriginal people haven’t been conquered … and yet, we’ve been treated as if we were a conquered people, conquered nations, and told, ‘This is what you get.’”

And so the question of what justice looks like for Pickton’s victims—or the 600 missing and murdered Aboriginal women across Canada—hinges on causes far more profound than any single officer or detachment. They, too, raise questions about prostitution’s criminalization, and poverty in Vancouver’s Downtown Eastside. And they strike at the root of Canada’s history of colonialism, racism and discrimination against Indigenous women.

One night, long before Pickton’s arrest, that dark past collided with another Native woman’s life.

“I had to flee for my life from the farm,” Cee Jai Julian, a former sex worker, recalls. “When I approached the RCMP, I wasn’t listened to. When I found out my friends were missing, I tried to tell the Vancouver Police Department, but they wouldn’t listen to me either.

“During the investigation no one believed me. They didn’t believe me because I was Native, drug-addicted, transient and a prostitute … All I can say is shame on them. They’ve got to start pulling up their socks and start doing their job more … We’re sex trade workers, we have the right to get the help that we need down here too. We’re human just like everyone else.”

David P. Ball is a freelance reporter and photojournalist in Vancouver, B.C. His website is davidpball.net