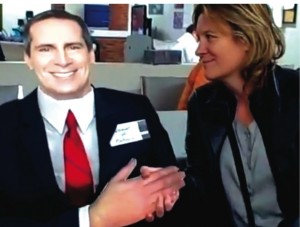 Canada had a long history of satirical  interventions in political discourse decades before the Tell Vic Everything campaign had Twitter users drowning Public Safety Minister Vic Toews in minute details of their everyday lives. In its heydays in the 1960s through to the early ’90s, the Rhinoceros Party fronted several political candidates who ran on platforms such as repealing the law of gravity and abolishing the environment.
Today, however, political satire is no longer the purview of This Hour Has 22 Minutes and a few hippies cranking out pamphlets to “The Dark Side of the Moon.” In fact, the Left’s best defense might be the only weapon the Right has never figured out how to operate—a sense of humour.

Through social media, satire has the potential to reach more voters than ever before; left-wing activists are slowly figuring out how to take advantage of this shift.

But how do you gauge the effectiveness of these kinds of campaigns? The government may be considering amendments to Bill C-30 but the proposed legislation hasn’t disappeared. Meanwhile, conservative groups continue to prod the national conversation to the right, attempting to reopen issues that were long considered, such as contraception and the environment. What is the place of satire in Canada’s political landscape?

Like the court jester in ancient times, Sean Devlin, creative director of TruthFool Communications, sees political satirists as one of the last avenues for combating abuses of power. That’s why Christopher Geoghegan throwing a pie at then Alberta premier Ralph Klein in 2003 was funny, while Klein throwing money at the occupants of an Edmonton homeless shelter in 2001 wasn’t. “When it is coming from the bottom, pointed upwards, it tends to be empowering,” says Devlin. “When it’s the opposite it’s just kind of mean.”

Since founding the Shit Harper Did campaign during the 2011 federal election, TruthFool has been using satire to reach larger audiences on issues ranging from asbestos mining in Quebec to the exploitation of the Alberta oil sands, and more. Because of their connections to Vancouver’s comedy and independent film communities, the company is able to create professional-looking multi-media campaigns that engage younger voters who feel bored or disempowered by traditional news sources.

Aside from providing entertainment, TruthFool’s work is unbound from the news media’s tradition of objectivity. Devlin believes that young people are more likely to trust news sources that aren’t required to give credence to every mainstream political idea, no matter how insane.

“A lot of these issues that are really crucial for young people to do with the climate and the economy and that sort of thing, there’s so clearly a right or a wrong,” he says. “When the media feels forced to pay mutual respect to both sides of that story, it undermines their credibility in the eyes of younger people.”

On the other side of the country, in a campaign dubbed “McGuinty and Me,” a group of antipoverty activists under the banner Put Food in the Budget has been touring Ontario soup kitchens and food banks with a cardboard mannequin of Premier Dalton McGuinty. One of the results is a three-minute video produced by the Toronto Star of activists and welfare recipients pouring their hearts out while across the table Dalton McGuinty’s eerie white-toothed smile remains unchanged.

It’s a familiar image to activist Melissa Addison-Webster, a member of Put Food in the Budget’s leadership committee, who knows that her work often fails to capture politicians’ interest. “God knows you need humour as an antipoverty activist,” she says. “I’ve been advocating for increases to social assistance rates for close to ten years. You just don’t feel like you’re getting anywhere lots of days.”

Although she understands the place for other forms of resistance, Addison-Webster sees the Put Food in the Budget satirical campaign as a relief from the often-dour tone of activism. “More militant responses to antipoverty issues polarize classes and I don’t think that leads to social change. Social change will come when there is solidarity amongst all people.”

Devlin agrees. “Comedically speaking, funny is funny,” he says. “If someone has laughed at a joke you’re making, even if it’s political and they don’t agree with your politics, on some level you’ve convinced them because they’re laughing.”

There was a lot of disappointment when Stephen Harper’s Conservatives took a majority government in 2011, but that setback in no way condemns the rise of this new era of Canadian political satire to an early death—quite the opposite. The more willing the right becomes to bend credulity in its policies, the more material it hands to the new generation of satirists. Just as the Bush years marked a zenith in American political satire, perhaps the Harper era will be Canada’s.

Erika Thorkelson is a writer and culture critic living in Vancouver. Her work has appeared in the Vancouver Sun, Herizons Magazine, and Joyland.ca, and she is the host of the Canadian Fiction Podcast.