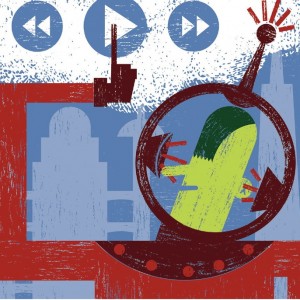 Today, three years after internet finally killed the radio star, few are shedding tears. Artists now have fair, direct and effective ways to reach the fans who will gladly buy their music. Let’s journey into this radical, new industry landscape via a typical Canadian week in music consumption:

Monday, October 22, 2018
Armed with a mental to-do list following a week at the Halifax Pop Explosion festival, Arjun Petit steals a few minutes before his classes begin at McGill to add a handful of new artists to his “watching” list on TipJar: a psych-folk band from Lexington, Kentucky, a Toronto mashup artist who re-writes melodies for older songs, and a live triple-dub-step trio he enjoyed in person but wasn’t sure would translate in the recordings. He’ll follow up when he has a bit more time.

Tuesday
Arjun scans the new releases on Rdio, bookmarking three highly-anticipated albums. With the latest from Chad vanGaalen still resonating in his ears, he leaves the artist two dollars on TipJar before closing his laptop. He’s down to his last seven TipJar dollar-credits on his $20-a-month plan for October, and he wants to use them judiciously. Arjun then leaves the house playing a “old favourites” playlist on his Android phone’s music app (an open-source app that pulls songs from Rdio, Bandcamp, Soundcloud and
his legacy iTunes Cloud library).

Wednesday
Arjun receives an inbox alert from drip.fm about a Vice Records re-issue of the Stills’ “Logic Will Break Your Heart,” released 15 years ago this week. As a $10-a-month subscriber to the Vice “drip”, he has been shipped a 180-gram vinyl pressing of the album plus expanded liner notes, and the message includes links to bonus audio and video content from the album’s original sessions.

Thursday
During a routine check of Facebook, Arjun notices his friend Leo has been using Spotify to listen to Dan Mangan, which reminds him that the Vancouver artist is coming through town next month and Leo has asked him to pick up tickets. He buys a pair and downloads them to his phone.

Later, Arjun meets his girlfriend and her friends at a local bar where the DJ is playing music they like, but not so loudly that they have to shout to be heard. Unlike the old days, the music performance-rights association SOCAN uses Shazam to track exactly what is played at most every restaurant, cafe and bar in the country, and distributes the writer performance royalties based on actual plays. Additional royalties are collected via the same musicians’ association that dreamed up TipJar. No longer does the industry rely on radio charts to measure what is played in public.

Friday
Lacking the energy after a long week to pay much attention to his musical choices while making dinner, Arjun puts on a playlist of new and old selections by one of his go-to music sources, Aux. Years ago this would have been a job for commercial radio, but Arjun likes that he can trust the music channel’s taste. His Rdio subscription allows him to avoid ads. When a particular song he doesn’t know catches his ear (“The Shape I’m In” by The Band), he adds it to his collection.

Saturday
“I’m battling a cold,” Arjun tells a friend who asks him to go to a house party. It’s partly true, but Arjun also has a date with his Roku—Arts & Crafts records is using the website Liveset to stream a showcase of the label’s biggest artists performing separately and together in a 90-minute program. For five bucks—a price set by the artist—he can watch the whole performance on his big-screen TV, and interact with other fans through a chat window on his tablet.

These days, Arjun is hardly alone in his music spending habits. Better bandwidth allows for high-quality music files to be streamed over different services, and the ease of use has created many converts. Fans even turned their backs on iTunes when artists made it possible for them to redirect Apple’s margins directly to creators. The middlemen of the former business model have lost out, but the rest of us can thank the interested parties on all sides who helped build a fair, artist-driven new media landscape for the early 21st century.

Mason Wright is a Toronto-based writer, editor, and web producer who loves everything about music.