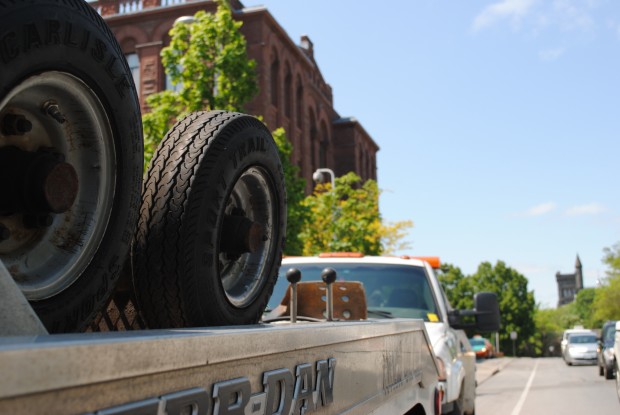 One of the many independent tow trucks on hand at Queen's Park.

One of the best ways to get noticed is to disrupt the morning commute. That is exactly what a convoy of independent tow truck drivers did this morning as part of a protest against the Ontario Provincial Police’s proposal to contact its use of tow truck companies to a selected few. Together, those 50 plus drivers from in and around the GTA, slowed the morning commute to a crawl on the 401, 427, Don Valley Parkway and the Gardiner Expressway. It didn’t stop there.

At about 10 a.m. a mass of tow trucks arrived at Queen’s Park and turned the street into a parking lot. When I arrived, at 11:30 am, the sides of the streets on the walk toward Queen’s Park were still lined with large diesel trucks, all with their orange and red lights flashing atop their idle ride. Many of the motorists in the area had no idea what was going on or why traffic had halted. ”

Currently tow truck drivers work on a first come first serve basis. This system essentially gives truck owners a level playing field and what many independent drivers see as fair competition. The new proposal would abandon this practice and give contracts to a few larger companies. As a result, these companies would have claim over all tows the OPP orders because of driving infractions. This is bad news for independent companies because OPP tows make up the majority of their business.

The argument for contracting out to larger firms is for “consumer protection”. Base pricing would be set to expel the claims of over pricing.

Allen Yeldea works for Discount Towing and doesn’t believe this to be a rational system. “The OPP would basically call whoever they want which is not fair,” said Yeldea. “We’re sitting out there putting in diesel every day, pulling in ridiculous hours, 15 to 16 to 17 hours and if they do a contract we are all getting screwed.”

Yeldea believes that larger companies such as Abrams Towing Services and CAA would likely be awarded the contracts. This move would likely see independent tow truck operators driven off the map.

Roy Loveless, another independent tow truck operator from Fergus, ON, came down to Toronto to voice his concerns. “I’m here to protest against the request for a proposal that the government put out to have 56 box store towing companies take care of all impoundment tows for the province of Ontario.” 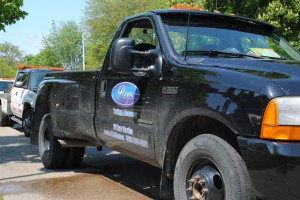 Loveless is the sole owner of the company which bares his own name, Roy’s Towing and Recovery.  Parked out front of the Provincial Legislature, he hopes to generate some awareness. Part of the problem at hand according to Loveless, is that the majority of population have no idea about what’s going on.

“There was actually a media ban on the contract and on the proposal. They didn’t want anybody speaking about it. They didn’t want any of the companies talking about it,” said Loveless, who is also the treasurer of the Ontario Federation of Independent Towers (OFIT). Independent operators, he said, have worked overtime and doubletime to prevent the move, and to bring the deal into the public eye. “Now the only option we have is to come down here and make our horns be heard.”

It’s always a tough call in determining the success of a protest.  Loveless has heard a lot of mixed feeling around the success of the event. “I would say it was successful but maybe others would disagree,” he said. “Obviously the motoring public would disagree a little bit, but unfortunately they don’t know about what’s going on in our industry and we have to do what we have to do to makes ends meet.”

Many of the independent tow truck operators are planning to come back down to Queen’s Park on May 24th for another similar event.