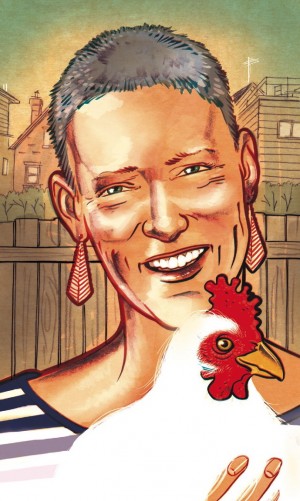 For the past three years urban gardener and author (City Farmer: Adventures in Urban Food Growing) Lorraine Johnson has kept chickens in her Toronto west-end backyard. As Toronto considers ending its current ban on urban fowl, Johnson, 51, serves up her reasons for overturning the bylaw.

THIS: What inspired you to get chickens?

LJ: I had been visiting my sister in Australia and I encountered a lot of people in the city who had chickens. It seemed normal. Nobody commented on it. It occurred to me that I wanted chickens too, for the eggs. The fact it was illegal in Toronto seemed (she pauses for a moment) surmountable.

THIS: Where did you get them?

LJ: I got three from a farmer outside the city. She has Heritage breeds, which means they aren’t raised commercially very much. It’s small-scale, usually organic folks, who are keeping these breeds going.

THIS: What do they cost?

LJ: I have a feeling—and I’m not referring to my farmer friend—that a lot of farmers who live in the country are sort of scratching their heads at the ridiculous amount of money urban chicken keepers are willing to pay. Because you can go to a farm coop or auction and get a chick for 10 or 25 cents. I paid $10 to $25 [each] for Heritage hens that were just at the point of laying eggs.

THIS: How many eggs do they lay?

LJ: From three chickens I get roughly 18 eggs a week. That kind of production is when the hens are in their prime. It’s pretty well that much from spring to fall. The production lowers in response to light levels. Some people put lights in their coops but I don’t.

LJ: It’s hard to describe. Because the chickens are eating worms and lots of greenery and are running around, their yolks are a brilliant, brilliant orange and the whites are firmer. For me, it’s also that I know I’m getting the freshest, most
delicious, organic eggs that are humanely raised. These chickens have a great life. I have no kind of doubts about their happiness.

LJ: Yeah, in something called an eglu. It’s made by a UK-based company called Omlet. There are so many bad puns in the chicken world; it’s so tempting.

THIS: The eglus are not cheap.

LJ: It cost me about $600 plus $80 duty when I brought it into Canada from Buffalo, where I had picked it up. Again, I think it makes any farmers living in the country shake their heads. They would just build one themselves.

THIS: The hens are OK in the winter?

LJ: It’s not a problem. I put bubble wrap around the coop and bought a reptile light for inside but I never even had to use it.

THIS: How do your neighbours react?

LJ: I’m lucky in that the two places I’ve lived I’ve had great neighbours who love the eggs.

THIS: So you bribe them.

THIS: But you have been busted.

LJ: It’s quite ironic because it was the day I was moving [about a year and a half ago, to my present address]. I wasn’t ratted out, which is how most bylaw infractions are triggered. No one complained. It was likely because a chapter in my book dealing with chickens had been excerpted in The Star, and there was an article about me and a picture of the chickens in the Globe. So I think it was someone within enforcement saying I’ve been too brazen about it.

LJ: I was given 30 days to get them out of the city. I was going away for a while soon after I moved so let’s just say they went on a vacation and when I came back I got more chickens.

THIS: Why is it illegal in Toronto? It’s not in many other places.

LJ: It’s not in Brampton, Niagara Falls, Vancouver. Or in almost any major US city. I think it goes back to the ’80s when there were concerns about the health of chickens in Kensington Market. To deal with the problem the city just banned all of them.

LJ: Yes. There’s a motion going before the Licensing and Standards Committee that, if passed, would have city staff write a report on how Toronto could accommodate backyard chickens. If that report is written then it would likely go before council for debate.

THIS: What if the bylaw isn’t changed?

LJ: That would be sad and tragic. A group of us are working to make sure that doesn’t happen. We’ve invited politicians and bureaucrats to come and visit us to see what it’s like for themselves. So far I’ve had senior public health and animal services people come and I’ve met with four politicians.

THIS: The concern, I guess, is noise, smell, things like that.

LJ: But they are misconceptions! They’re quieter than dogs. You don’t need a rooster, so that problem isn’t there. And, yes, if you have 5,000 chickens in a commercial building it will smell. But not three or four in your yard. The feces decompose quickly. And as long as you take care of the coop, as you need to take care of any pet, there’s no problem with smell at all.

THIS: Will you continue to have chickens no matter what?

THIS: You’ll be a scofflaw?

LJ: Yes, me and many, many others, from all walks of life and backgrounds and motivations [for having chickens]. There is no stereotypical person.

THIS: How many of you are there?

LJ: No one is able to estimate accurately because it’s such a hidden activity. But you don’t have to scratch very deep to find a chicken in the city.

In January 2012, Toronto’s Licensing and Standards Committee voted to indefinitely defer the motion to commission a report on the feasibility of legalizing backyard chickens.