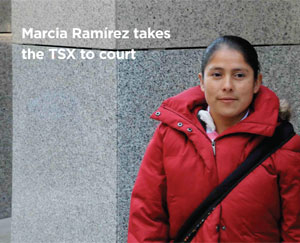 Marcia Ramírez is suing the Toronto Stock Exchange over a violent incident with a Canadian mining company's security service. Photo by Malcolm Rogge.

Marcia Ramírez is in for the fight of her life: suing the Toronto Stock Exchange for listing a company that it knew might cause her harm.

In early December 2006, Ramírez was one of some 30-odd residents of the remote Intag valley in northwestern Ecuador who stood in the way of over 50 heavily armed security guards, mostly ex-soldiers, who were hired to set up camp on mineral concessions belonging to Vancouver’s Copper Mesa Mining Corporation. Wanting to protect their rich cloud forest home, the residents urged the guards to leave. The guards responded by spraying tear gas into the protestors’ faces and firing shots that injured one man.

Now Ramírez and two other villagers are suing Copper Mesa (formerly Ascendant Copper Corp.) and the TSX for more than $1.5 billion. The suit, filed in March, claims that the TSX is negligent for listing Copper Mesa when the TSX knew, having been warned in the company’s listing prospectus, that violence could escalate should mineral exploration activities continue. If Ramírez’s lawsuit is successful, it will set a precedent for communities seeking justice for damage done by Canadian companies abroad.

The Intag villagers are also suing members of Copper Mesa’s board of directors for failing “to take any meaningful steps to reduce the risk that threats of physical harm and violent tactics would be used by the corporation’s agents.” The defendants vigorously deny the allegations.

Ramírez argues that if the TSX hadn’t listed Copper Mesa, the company may not have been able to raise capital allegedly used to hire the violent security guards. The TSX is the biggest source of financing for global mining and specializes in services for junior companies like Copper Mesa. But this success story has a dark side—Canadianfinanced mining companies have been accused of destroying lands and causing social upheaval from Mexico to Argentina.

Ramírez hopes her lawsuit will make the TSX think twice about what companies it lists and cause mining companies to realize that local people won’t tolerate abuses.

But first they need to get to court. Murray Klippenstein, the Toronto lawyer representing the Ecuadorians, says they anticipate “a blizzard of procedural motions” that could take years before they get a court date. Currently, Canada has no act that allows foreign citizens to fight Canadian-financed abuses occurring abroad. But Klippenstein believes they have a case. When company directors in Ontario make decisions that lead to harm in Ecuador, he argues, the company is therefore vicariously responsible.

“No matter how you dress up a corporation with all sorts of subsidiaries, chains of financial transactions, and miles of distance,” he says, “the principle that you should not hurt another person should apply.”