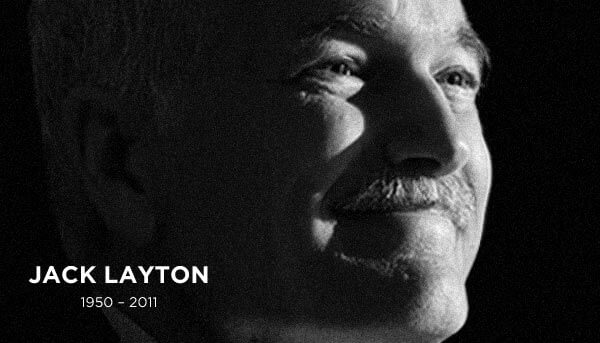 Canada’s public life has been diminished today by the death of Jack Layton, leader of Her Majesty’s Loyal Opposition and of the New Democratic Party. Known to millions of Canadians simply as “Jack,” Layton embodied the kind of decent, energetic, principled, and optimistic political leadership that so many of us wish to see more of on Parliament Hill. Though he was a visionary party leader and skilled at pulling the levers of power on the Hill, his achievements, in many ways, transcend partisanship. He was a champion of causes and people even when—perhaps especially when—there was no electoral advantage in being so. That commitment to his principles—that everyone deserves opportunity, that our affluent society has a duty to share its wealth equitably, that every voice has something to contribute—endeared him to people across the political spectrum (and made him a scourge to a deserving few). His family, his party, and his country are sharing a tremendous loss today.

The press and the web are buzzing with tributes to Jack Layton now, and memories of the effects he had, large and small, on our civic lives. We’re not going to repeat them here; everyone has their own thoughts and can share them as they like—or contemplate them in silence, as we’re choosing to do today. Please feel free to leave your thoughts below, but perhaps the best thing all of us can do now is to think about what the life and career of Jack Layton means to each of us—and how to preserve that spirit in struggles yet to come.

Update: Jack Layton’s parting letter to Canadians was just released, and it is a stirring read.