His illustrated memoir tells all about being a john. Why did he abandon relationships? 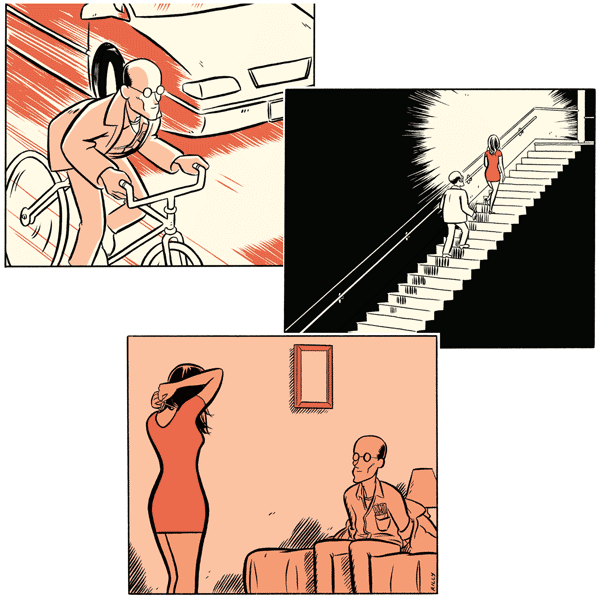 Chester Brown, 51, is an accomplished graphic novelist whose new book, Paying for It, depicts his decision in 1999 to abandon romantic relationships in favour of paying prostitutes for sex. Along the way, however, he still seemed to find a version, unconventional though it may be, of true love.

This: How long did it take to do the book?

Brown: One year to write the script and four years to draw it.

This: The primary trigger for going to sex workers was when your romantic relationship with Sook Yin-Lee [the actor and CBC journalist] ended in 1999. When she had a new boyfriend move in with the two of you.

This: Why were you through with romantic love?

Brown: It brings people more misery than happiness, in a nutshell.

This: Haven’t I read that the most miserable creatures around are men who don’t have a relationship?

Brown: I think in large part that’s because of romantic love. They have this ideal in the mind and they’re failing to bring that into their life. If they didn’t want romantic love they then wouldn’t be miserable. It’s the ideal that’s the problem.

This: How many prostitutes did you go to over the years?

Brown: Twenty-three. Some I saw multiple times. Every single experience is in the book.

This: How much did you spend on them?

Brown: I’m not sure. I’ve never been asked that before. At roughly $200 each time…hmmm. I guess we could do the math.

Brown: She seemed more open. As time went on the connection between us seemed to grow. There were other things that happened to help establish a bond that unfortunately I can’t get into.

This: Because she doesn’t want her personal information revealed?

Brown: She told me to put her in my book as little as possible. I will say she’s an amazing person. Really wonderful and extremely trustworthy.

This: But you still pay her.

Brown: We have sex about every two weeks and, yeah, I pay her.

This: How do you define your relationship with her?

This: You must have feelings for her.

Brown: I admit I have romantic feelings for her. And when you feel that way about a woman you want to talk about her. I wish I could blab away about her wonderful qualities.

This: Do you double date with friends?

This: What if she wanted you to stop paying her.

Brown: All of a sudden it would be like every other relationship. I think romantic relationships tend to fail. I’m happy with things the way they’re working.

This: Have you ever asked her to move in with you?

This: It would ruin things?

Brown: Oh yeah. I think so.

This: Don’t many men who go to sex workers want the talking, the touching, the cuddling even more than the sex? Was that the case with you?

Brown: I definitely know that’s true of a lot of men. But I did want the sex.

This: They want the intimacy, even if it’s forced.

Brown: Yeah. Most of the prostitutes I saw would jump up and go to the shower after [we had sex]. Denise was one of the few who seemed to like to cuddle afterwards.

This: Was the intimacy you felt with her what was missing with the other sex workers?

This: Which suggests that’s what you were looking for all along.

Brown: I hadn’t known that that’s what I was looking for but, sure, yeah.

This: Isn’t that what we’re all looking for?

Brown: Hmmm. I guess so.

This: You still down on romantic love?

Brown: I do change my mind at the end of the book. I come to think of it in a different way and I decide what I have a problem with isn’t romantic love but what I call possessive monogamy.

This: Where do you think your relationship is headed?

Brown: I’m pretty sure Denise is fine with the way it is right now. She doesn’t want me to be a conventional boyfriend. I think everyone else wants there to be a Pretty Woman type of story where we end up in a conventional marriage. But we don’t. No.