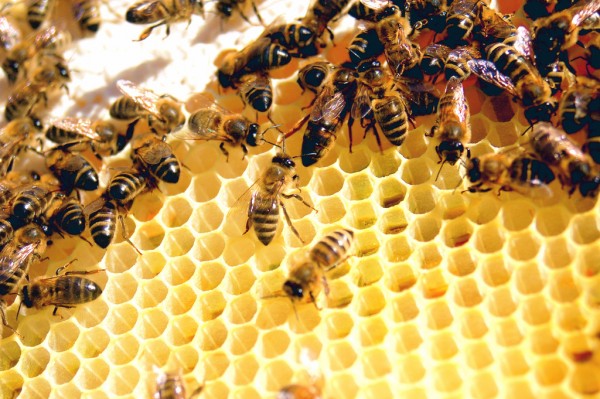 Colony Collapse Disorder hasn't been in the news as much recently, but it continues to plague bee populations and threaten agriculture. Creative Commons photo by Flickr user Todd Huffman.

Stories of Colony Collapse Disorder swarmed the mainstream media in 2006. Report after report claimed pollinating bees were dying en masse, abandoning their hives, and putting our entire modern food system at risk. Today we rarely hear about CCD, even though the number of bee colonies that survive each winter continue to drop at abnormal rates. While it would be nice to place the blame entirely on monocrop farming and climate change, CCD-like phenomena have been reported in the U.S. every 30 years since the late 1800s, back when it was called “disappearing disease.” And, as it turns out, there are plenty of bee threats still buzzing about.

Many studies point the stinger at the varroa mite, which weakens and often kills bees by sucking their blood and leaving them susceptible to viruses. Depending on which experts you ask, mites and the diseases they carry cause between 30 and 50 percent of bee deaths annually in the U.S. and up to 85 percent of annual bee deaths in Canada. And it’s not difficult to infect a hive: bees are moved across the country for wintering and, as standard practice, to pollinate crops for large commercial enterprises. This migration leaves bees stressed out and susceptible to disease.

While some believe solving the mite problem will also solve the CCD mystery, others blame wonky weather: late winters, cool springs, long, wet summers, and overly warm falls. Though this year looks good so far, 2008 and 2009 were dismal. Such temperature fluctuations have confused bees and beekeepers alike—they either give bees a late start or keep them buzzing long into their wintering period, frustrating beekeepers who are unable to plan because they don’t know what kind of losses they should expect.

Poor bee diets don’t help, either. In the summer, honeybees across the world are expected to pollinate a third of the crops that make it into our food chain, but are often fed an inadequate pollen-and-nectar diet. Some groups and scientists blame neonicotinoids, or nicotine-based pesticides; others say they’re being properly used. In a pilot project undertaken by the Italian government, neonicotinoids were banned from use on corn in specific parts of northern Italy for one year. After the ban, Italian beekeepers in the north reported no widespread losses—a first in 10 years—giving bee lovers hope that stricter environmental regulations could help colonies thrive again.