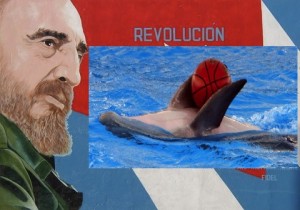 Out of context it’s hard to tell exactly what’s going on.  We know someone is inviting someone else to watch the dolphins.  The someone else sounds a bit confused.  And somehow the first speaker knows that, despite normally posted hours, the aquarium will be open tomorrow.  Under normal circumstances you would, as I would, think this was some sort of surrealist play when Che’s daughter and a nuclear scientist entered the dialogue.  And, normally, we would be right.

Today, however, the truth is far stranger.  Speaker 1 is Fidel Castro, speaker 2 is American journalist Jeffrey Goldberg and speaker 3 is a bodyguard.  You just can’t make this up.  I’ll spare you all of the details (although I do encourage you to read the original pieces from the Atlantic here and here) but Fidel apparently was so impressed with an article that Goldberg wrote about Iran and Israel that he decided to grant him an extended three day interview — part of which took place at the aquarium.

Since coming out on the right side of a serious gastro-intestinal illness Fidel has been speaking with increasing frequency about international matters.  This, says Goldberg’s travelling companion Julia Sweig, is Castro trying to reinvent himself as a senior global statesman: “Matters of war, peace and international security are a central focus: Nuclear proliferation, climate change, these are the major issues for him, and he’s really just getting started, using any potential media platform to communicate his views. He has time on his hands now that he didn’t expect to have. And he’s revisiting history, and revisiting his own history.”

But, the dolphin show.  To me, at least, this seems an odd stage from which to launch your global nuclear disarmament campaign or, stranger still, to argue for a more ecologically sound global order.  To be fair this is no ordinary dolphin show nor, for that matter, is it an ordinary aquarium.  The dolphin trainers do not run the show so much as they are also part of it.  Watched from beneath the surface the show is a carefully scripted dance between human and dolphin.

The aquarium itself is run by a nuclear scientist and one of the veterinarians is the aforementioned daughter of Che.  Perhaps there is some sort of message here about beating tanks into tractors.  It can be no coincidence that an interview about Israel’s nuclear arsenal and Iran’s nuclear ambitions ends up at an aquarium managed by someone with the theoretical know-how to build the bomb.  Cubans, maybe we are supposed to infer, have no time for such pursuits?  Having been brought to the brink of nuclear apocalypse once they would rather spend their time with the planet’s second smartest animal, who don’t happen to be threatening existence as we know it.

Any which way, however, this has to be one of the strangest meetings since, well, ever.  I have no doubt that Castro was following some sort of script but, even if it will be some form of plagiarism, when it comes time to write my screenplay I’m using this scene.