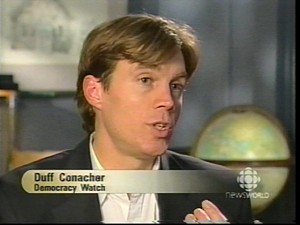 In this edition of Listen to This, Nick Taylor-Vaisey interviews Duff Conacher, coordinator of Democracy Watch, a non-partisan advocacy group that lobbies for greater government transparency, accountability, and democratic reform. Conacher is one of the best-known media personalities in the field, constantly called on by media outlets to talk about what really goes on behind the scenes on Parliament Hill. With their slogan “the system is the scandal,” Democracy Watch aims to identify, publicize, and pressure for the closure of legislative loopholes that allow waste, corruption, and abuse of power by elected officials and civil servants. He talks about the dynamics of the cozy relationship between lobbyists and politicians, Democracy Watch’s aggressive media strategy, the key role that Ralph Nader played in the founding of the group, and why he’s not a political junkie.

[Note: we’re posting this podcast a week earlier than scheduled because the issues that Conacher addresses are so much in the news at the moment, with the Guergis/Jaffer affair making daily headlines. Because of that change, the next podcast will be up in three weeks, not two.]