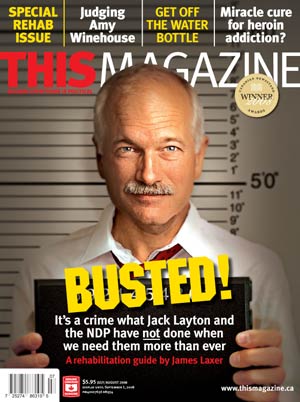 We’re extremely pleased to tell you that This won last night at the Canadian Newsstand Awards in the small magazine category. This is actually the third year in a row we’ve won this particular award, which is given out annually to magazines that sell well on the newsstand. The issue that took the prize is our July-August 2008 issue, featuring a popular (and controversial) cover story on the NDP by James Laxer.

Lots of people deserve thanks for their work on the cover, and the issue, and for helping to get it into readers’ hands:

And of course, thanks to you, our readers, for buying, reading, and supporting This Magazine.