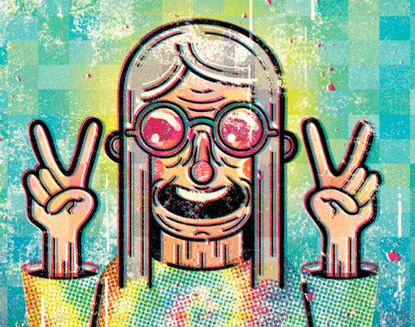 Baby boomers: drop the watercolours, back away slowly

In last spring’s flimsy caper comedy Mad Money, an uneasy truth lingered beneath the slapstick thievery and rolling-in-greenbacks hijinks: the fabled baby boomers, now hitting their early 60s, have no idea how to deal with the diminishing returns of their impending senior citizenship. Pardon me if I gloat.

The film opens with Diane Keaton and Ted Danson, a greying upper-class couple with grown children, flitting around their vast, over-decorated home like panicked pelicans, wattles and all. Ted’s character has lost his job, and Diane’s has never worked. They contemplate getting jobs for which they are overqualified (or simply too self-important) to perform, but are so horrified by this prospect that when Diane finally does get a crappy job, her desperation and complete disbelief in her change of fortune leads her to go on a gluttonous crime spree.

Watching Mad Money, it occurred to me that, as a post-boomer, generation X-er, echo baby — choose your own term — I have performed many jobs “beneath” my education or class standing. And so has everybody I know.

In fact, I can’t think of one person from my generation who has not spent at least half of his or her adult life gainfully underemployed — typically by boomers with a third, or less, of our education and credentials. For clarification, I am, according to most demographic standards, a near-boomer. I prefer the term “post-boomer,” thank you, if the B-word must be used.

I was born in 1965, the year traditionally cited as the end of the post-WWII baby boom. But I have always considered this calendar system woefully imprecise. Boomers are a cultural phenomenon — as they like to tell us every single day — and not a demographic one.

A boomer is someone whose first “English Invasion” pop music crush was the Beatles. Mine was the Sex Pistols (and that’s one hell of a telling gulf). A boomer fondly remembers his or her first colour television. A post-boomer remembers the day the cable was hooked up. Boomers were taken to Expo ’67 to get their first taste of culture on a grand scale. Post-boomers were taken to … well, nothing.

One of the first bitter lessons we postboomers learned about the adult world is that once a boomer has all the cake he or she wants (practically free university tuition, full universal health care, bountiful entry-level jobs with minimal qualifications, CUSO), they don’t put the rest of the cake in the freezer for a future sweet tooth — they take a hammer to it and shove the mush down the garberator.

But now boomers are edging toward their golden years and you can see the fear steaming out of day spas and rumbling across golf courses like a charged purple haze.

Naturally, they’ve turned a timeless reality into a fresh business opportunity. Bookstores are packed with how-to-age books for boomers. The ever-resourceful Moses Znaimer has dubbed his own pre-walker days his “zoomer” years and created a magazine to sell the brand. Radio stations are converting to Age of Aquarius nap-time programming, and televisions are flooded with gardening and travel shows.

Sherry Cooper’s bestselling The New Retirement: How It Will Change Our Future (the hubris of the boomers demands that everything they do be declared “new” — what next, The New Death?) attempts to counter boomer mortality anxiety with recipes for “wellness” management and, most important, investment profit maximization (one suspects the two goals are mutually inclusive).

According to sherrycooper.com, “boomers will redefine retirement with great energy and creativity, working well beyond age 65 and mostly by choice…healthy goal-driven boomers will seek purposeful leisure…” Am I the only person who finds that paragraph terrifying?

Working “well beyond age 65”? Swell. That’s great news for the economy, transnational trade, all levels of government, the civil service, the CBC, academia, the arts (I could go on here, but it’s too depressing). Seasons 30 to 40 of The Vinyl Café ought to be a riot.

And what exactly is this futuristic-sounding “purposeful leisure”? I read that quote to a fellow post-boomer artist, and he stopped cold, gulped, and said, “Oh God, now they’re all going to be artists … watercolours are back.”

While I don’t condone violence, I can condone a reasonable, humane culling of the aging herd. They don’t have to actually die, just virtually pass away. And here’s how: if you are a boomer, stop. Just stop. Stop working, stop acquiring, stop micro-managing your (and my) universe, stop sucking the life out of popular culture, stop going outdoors in those ghastly Crocs and Tilley Endurable hats, and, please, stop talking about how you’re eventually going to stop and, instead, stop. Now.

You’ve had a good run, flower children, longer than anybody else’s, but the bloom’s off, it’s last call at Alice’s Café, time to relocate. I hear P.E.I. is nice, and it has a convenient bridge. The kind that locks at night.