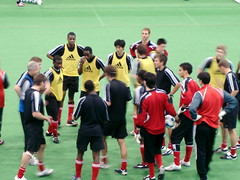 image courtesy John Degen’s page on Flickr.com
I just wanted to revisit an earlier post I made about Toronto FC, the new major league soccer club coming to Canada in the spring (first home game, April 28 against the Kansas City Wizards). Judging by Jessica’s recent post, we can’t look to Toronto City Council for community leadership, but I think we can look to the soccer pitch.
I seem to recall someone in the comments section suggesting there is “no evidence major league soccer will grip the city in a meaningful way.” Please note the seating chart below outlining how over half of the new stadium is already sold-out of season tickets, with months to go before the first boot hits a ball. My season tickets are in Section 221, along with 3 of my high school buddies’. 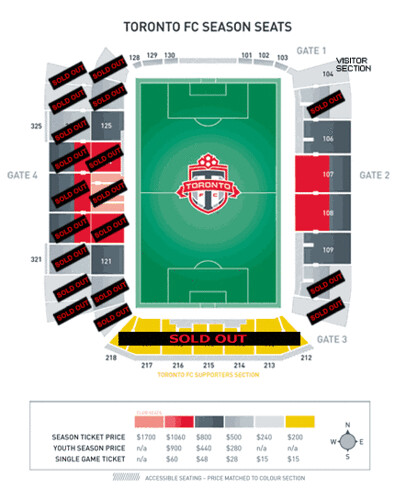 image courtesy Toronto FC
When we bought our tickets, we had no idea that the $12-or-so a game we were paying was going to be one of the best investments we ever made. With international superstar David Beckham set to make his MLS debut in Toronto on August 5th, I’m guessing we now own four of the most valuable professional sports tickets in Toronto in 2007. Beckham and the LA Galaxy will, of course, be soundly defeated by our boys, but if anyone wants to see that happen live, it may already be too late.
I watched a press-only team practice this morning at an indoor facility north of the city. Coach Mo Johnston has solid experience both in this league and in Europe, and he takes no crap from his squad. This was a full-tilt, two-hour skills work-out that saw marquee players mixing it up with the young hopefuls. At the end of it, Johnston gathered the men together and made about seven hard cuts to the squad. Now they get on a plane for more training in Florida and a mini pre-season tourney against other MLS squads in South Carolina. These guys are not fooling around about bringing quality sport to the city. The payroll talk in the scrum after practice was in the millions. Beckham’s reported salary is stratospheric.
I repeat my original point. Sport plays a vital role in building livable and vibrant communities, especially in urban centres. Toronto is a bunch of soccer-mad international populations knit together, not always so comfortably. BMO Field, where the FC will play brilliantly, can be said to exist on the border between competing communities, both in southwest Liberty Village, a hipster condo enclave, and southeast Parkdale, a challenged neighbourhood struggling with increased gentrification pressure from the east. Why don’t we all meet in a pub near the stadium one game-day and get to know each other better?
The teams’ motto?… all for one.