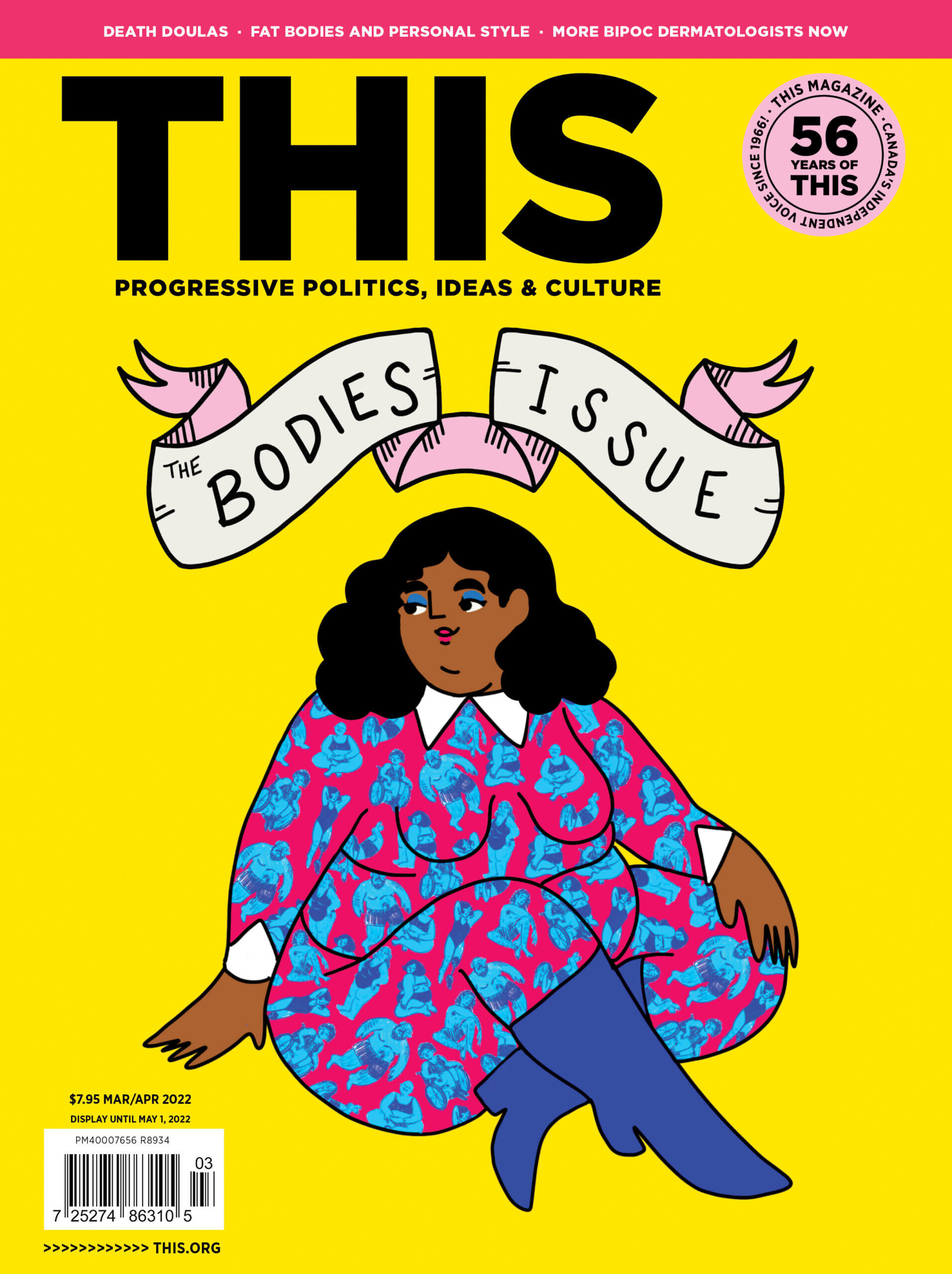 I think about bodies in a political sense, too: trans rights, fat liberation, disability justice, access to abortion. I think about people who have willingly put their bodies on the line as part of their activism; about the people in prisons who lose so much bodily autonomy through incarceration; about sex workers demanding the right to decide what they do with their bodies; about labourers who exert their bodies in order to provide for themselves and their families. I think about the bodies that haven’t been valued through the COVID-19 pandemic and the bodies that weren’t valued through the AIDS crisis. There’s so much bound up in bodies.

There are also many ways in which I have not had to think about my body when I take up space: I grew up independently mobile, on the thin to curvy spectrum, cis, and white. When Sarah Charles writes about entering a space knowing she is, on some level, representing all Black women, I know this is not an experience that’s been mirrored in my life in any way. When Lorri Neilsen Glenn talks about being overlooked as an older woman, I know this is coming (unless things radically change), but it’s a bodied experience I’ve thus far only learned from, not shared.

While some experiences may ring true to some readers, there’s opportunity to learn from other people’s experiences of their bodies, and their work with bodies, throughout this issue. Dorcas Marfo talks about growing up as a dark-skinned Black person with eczema, and how her experience interplays with the need for more BIPOC, specifically Black, dermatologists in Canada—and more education about melanated skin in the dermatology field. Jacqueline Salomé introduces readers to death doulas, who support people at the end of their lives and work to demystify death. Samantha Nock talks about scarcity when it comes to clothes for fat bodies, and how in her teens she was unable to really discover her personal style, or authentic self, because of this. Samantha Peters talks about new legislation that’s supposed to support judges being more educated around sexual assault. But, she argues, this framework still relies on the idea of a “perfect victim,” and might not really serve those of marginalized identities.

We didn’t go into doing an issue on bodies thinking of it as a “hard” topic, like mining, or prisons, or elections. But our bodies, and the bodies around us, have so much to do with how people are treated in the world and within institutions. When people talk about bodies in the mainstream media, it’s often seeped in diet culture and white supremacist beauty standards. Granted, this is changing, and we’re thankful for it, but it’s going to take a lot of work to undo decades of damage. We dedicate this issue to everyone whose body has been disrespected, marginalized, or seen as “other.” To us, these are the bodies that should be making headlines.