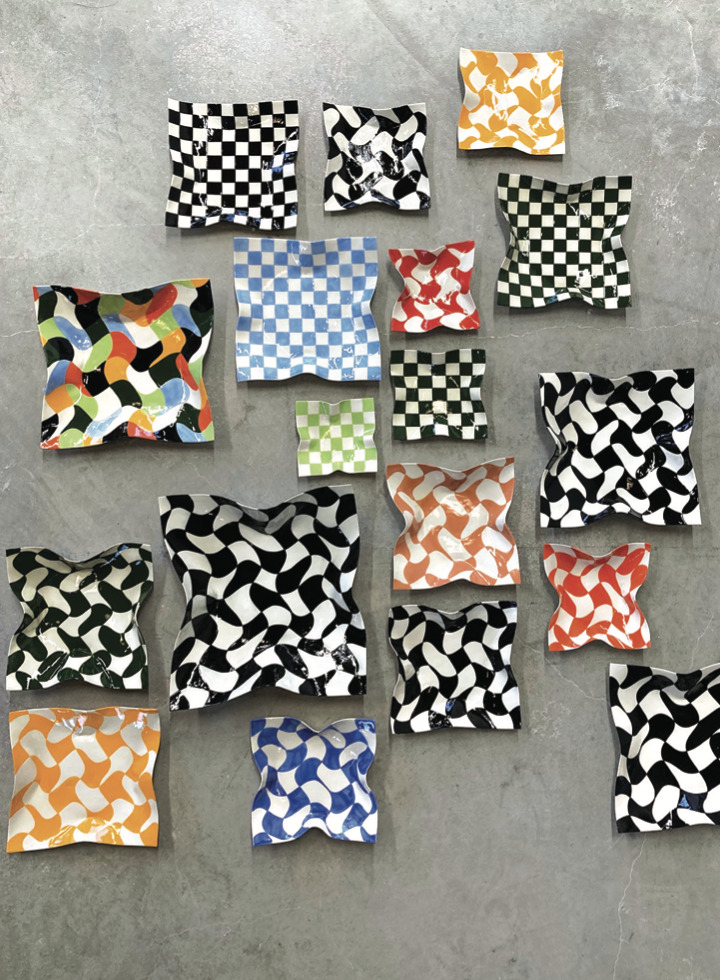 Over a decade out of art school, Vancouver-based artist Ami Sangha has found her niche. Sangha is the owner of Ami Like Miami, an online shop where she sells handmade ceramic dishes, painted with funky patterns and bright colours.

During her undergraduate degree, Sangha studied printmaking. In her late twenties, she fell into a deep depression, which prevented her from creating for a couple of years. While Sangha worked to get out of her depression, she took a ceramics class, which contributed to her healing. “I felt really free in ceramics, like I felt this sort of childlike way of trying to experiment and play and it felt so uplifting,” says Sangha.

Now, Sangha has a process when designing ceramics, which includes referencing various photos, colours and patterns that she’s found, sketching the design and going into her studio to make it. Still, there’s room for experimentation. “Recently I saw someone wearing a sweater vest, and I was like, I love that pattern. I’m going to try and make it with ceramics.”

In 2019, Sangha started making what is now her signature wavy dish. After gaining interest locally, Sangha’s ceramics grew in popularity in mid-2020 when the dish garnered attention on Instagram (@ami.like.miami). The success led to orders from larger retailers like Home Union and Wolf Circus, which further increased her audience. “Last summer I didn’t do anything but paint. The pandemic ended up being great timing,” she says. At this point, Sangha has sold between 600 and 700 wavy dishes.

Despite the growth, Sangha is a one-woman maker. She prioritizes slow creation and aims to release a new ceramics collection every year. “These are pieces of art to me, and I can’t go any faster than what I’m doing,” she explains. “It’s really important for these [pieces] to be coming from me and my body and my hands.”

This growth has also given Sangha the platform to share her Indian and Ukrainian identity. “If you want to ascribe to Ami Like Miami, you’re also following my political views, my personal views, how I feel about
my family and where I’m from, and that’s been really freeing,” she says. “As a first-generation Canadian, it’s a very overwhelming feeling to get to experience this type of freedom.”

Sangha is currently testing new ceramic styles and hopes to have them released by the holidays. In the future, she plans to expand beyond ceramics and have an art show, the first since her art school days. But one thing is certain: she’ll trust her intuition. “It’s important for me to express myself in whatever medium pulls me at the moment, and for right now it’s clay.”