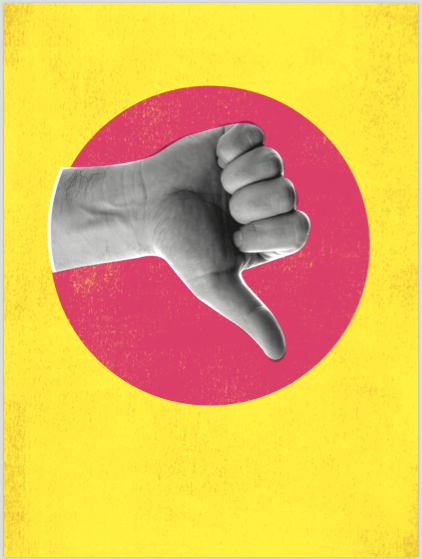 Clin D’Oeil Village hosts the Deaf Party every night until 3 a.m., the air vibrating with purple and green lights and pounding bass. Mechanical bulls, vintage arcade games, Deaf musicians and DJs, and food vendors surround the enormous dance floor at the village’s centre. On that dance floor, and all throughout the village, thousands of fluttering, rhythmic hands speak in dozens of different Sign Languages.

Clin d’Oeil Village is part of Festival Clin d’Oeil in Reims, France. Last July, I had the great fortune to attend this festival, which takes place every two years and is the world’s largest Deaf arts celebration, attracting thousands of people from all over the world. Since the festival began in 2003, it has featured films, plays, street performers, musical acts, and visual artists. Some of the performers present their creations in the village, which stands in the parking lot of a soccer stadium; others present their work at either the cultural centre Saint-Exupéry or the gorgeous La Comédie performance theatre.

Clin d’Oeil Village was more than a spectacle, more than a celebration. For the first time in my life, I saw a glimpse of what home looks like—I had never experienced anything like it in Canada.

On each occasion, the festival singles out different countries for promotion; in 2019, Canada was the showcased country, and my play The Black Drum, which was first staged in Toronto, was the featured piece. Hundreds of people packed into La Comédie to see the play, which is told in American Sign Language, Signed Music, and video projections, and is the world’s first all-Deaf musical.

The journey home was difficult. Soul-cracking. I, a Deaf man who grew up in a hearing family, had just discovered how true belonging felt. And I had to leave.

When, at Pearson Airport in Toronto after the festival, I said goodbye to my many wonderful Black Drum colleagues and walked down the hallway by myself, I had to stop and lean on the wall.

My hands trembled. My breathing became constricted. It was not anxiety. The world around me looked strange. It had more depth, more colour. I felt… not reborn, but new-born. A new compartment of my imagination had opened, and fresh questions burst out: what makes Canada different from Europe and the United States, where opportunities for Deaf artists arise much more often? Why is Canada so
far behind in providing opportunities for Deaf artists? Why, in a country that continuously brags about its acceptance of all people, is Canada so closed- minded about Deaf people and Sign Languages? What kinds of stories could Deaf people tell if we no longer had to continuously justify our existence?

“I am where I am because I left home,” says Dawn Jani Birley. Birley, 42, was born in Regina but has lived in Helsinki for the last 20 years. One of the world’s most renowned Deaf actors, Birley starred in The Black Drum as well as Prince Hamlet in Canada in 2019; she also starred in Finnish adaptations of The Vagina Monologues in Reims and of Children of a Lesser God (retitled Sanaton Rakkaus) in Helsinki.

“If I never left home, I doubt I would’ve ever become an actor. It’s the truth and a sad fact.”

So why is Canada so far behind?

Sage Lovell, a Deaf femme queer nonbinary artist working in Toronto, says, “The way this country is geographically designed, in comparison to the United States, means it’s difficult to develop connections with people who live so far away. In cities such as Vancouver, Edmonton, Calgary, Regina, Winnipeg, Ottawa, Kingston, Toronto, Montreal, and Halifax—we do have a number of Deaf artists, but we do not always know about each other.”

Daniel Durant, an American actor who had roles in the Broadway hit Spring Awakening, the television show Switched at Birth, and, most recently, the Netflix series You, says it’s crucial to “make friends with or meet important people—producers, directors, writers, because they will think about you for your next opportunities in theatre and television and film.”

But that level of networking is only possible when the infrastructure exists to support those opportunities. Educational opportunities and legislative protections play enormous roles here. Several Deaf schools in Canada have closed or are on the verge of closing; in Saskatoon, where I live, the R.J.D. Williams School for the Deaf closed in 1990 and there’s been a lack of access to American Sign Language (ASL) education ever since. Canada does not have a Deaf-centred post-secondary institution, whereas the United States has Gallaudet University, the world’s only Deaf liberal arts school. And, as Birley points out, while Canada has ratified the United Nations Convention on the Rights of Persons with Disabilities (CRDP), Article 21 of which includes “[r]ecognizing and promoting the use of sign languages,” the Canadian government has not followed through and explicitly enshrined into law Deaf people’s right to access Sign Languages.

Chris Dodd, founder of the sound off Deaf performance festival in Edmonton, states that “in Canada, we have a patchwork system that mostly draws upon the Charter of Human Rights, which leaves it up to individuals to decide what is fair or right.” It is a widely held belief that the recent Accessible Canada Act is toothless and does not provide enough legal clout for Deaf people to argue for their rights, while the United States has the Americans with Disabilities Act (ADA), which guarantees access to Sign Language.

“In the usa, there’s a clearer understanding of Deaf culture and history and language,” says Elizabeth Morris, a Deaf actor and director originally from Kingston, Ontario, who trained at Gallaudet University. “I did not feel the frustration or the need to explain about my culture and language.” This, she says, is specifically because she was at Gallaudet.

That ability to understand and support Deaf culture has been severely inhibited by philosophical differences—specifically regarding language and communication. “A.G. Bell has a strong hold in most provinces,” Birley says, referring to the inventor of the telephone, who has become a vilified figure in the Deaf community because of his vehement arguments against Sign Languages. According to Birley, it’s partly due to Bell’s influence that “Canada is one of the worst places for Deaf people.”

A persistent position in Deaf artistic circles is that Deaf people must be in charge of their own stories. When hearing people take charge of Deaf narratives, it dilutes the power of those narratives. Audism, the exclusionary privileging of hearing and sound over deafness and Sign Language, runs rampant in Canada, to the point where we do not have a clear idea how many Deaf and hard-of-hearing people live in this country. According to the Canadian Association of the Deaf (CAD), “no fully credible census of Deaf, deafened, and hard of hearing people has ever been conducted in Canada.” The typical formula is to use the 10 percent ratio, because Canada has roughly 10 percent of the population of the U.S.; this means, taking 2015 as an example, that there are 3.57 million hard-of-hearing Canadians, with about 357,000 culturally Deaf Canadians—that is, Canadians whose first language is a Signed Language.

Each province appears to have different standards regarding accessibility for Deaf people, from provincial legislation to artistic funding mandates. The Canada Council for the Arts has a clear accessibility mandate and provides both ASL and Langue des signes québécoise (LSQ) interpretation for Deaf artists applying for grants; the Saskatchewan Arts Board, the Ontario Arts Council, and the Manitoba Arts Council also have accessibility mandates and provide application guidance in ASL or support funding for people who are Deaf or living with a disability. The B.C. Arts Council, the Alberta Foundation for the Arts, the Prince Edward Island Arts Grants program, and the Yukon Arts Fund, among others, do not explicitly guarantee Sign Language access for applicants or o er support funding specific to Deaf artists, which prevents Deaf artists from applying for grants. This barrier makes it more difficult for Deaf artists to create and to reach out and help others understand Deaf culture through the prism of art.

Education is another barrier. Many Deaf artists do not have the same level of education as their hearing peers, due to lack of access from the very start of their time in educational institutions. As a result, “more and more Deaf children are being placed in mainstream schools,” says Morris.

Lack of educational opportunities can impact one’s chances of receiving funding, as Torrie Ironstar, a Two- Spirit Deaf Nakota visual artist from Regina, states: “When you have no art degrees, most of the grants or support are very limited, so artists like me aren’t approved. I’m self-taught and I don’t have any degrees, like a BFA, so I have to work to obtain funds and provide what I need.”

In addition to education and legislation, white privilege within the Deaf community is a pressing issue. Natasha Bacchus, a Black Deaf actor and performance poet from Toronto, says that the training and job opportunities for Deaf BIPOC are severely lacking in Canada. “I went to New York for training,” she says. “In America, they have great resources to help Deaf BIPOC artists to develop their skills and knowledge.”

Ironstar highlights a key, and often untold, aspect of Deaf history: “Indigenous signs are a huge part of Deaf culture, because we invented them. We founded the language with tribes back in the early times before the settlers came. We had no label or definition for the word ‘deaf.’ It doesn’t exist because we see everyone as the same.”

Like much of Canadian history, Deaf history is Euro-centric. American Sign Language is often said to have had its roots in 19th-century French Sign Language, but Indigenous Sign Languages were developed centuries prior and have, according to linguistics researcher Jeffrey Davis, a professor at the University of Tennessee in Knoxville, formed half of what we now know as American Sign Language.

“Canada prides itself as a diverse and lawfully correct country,” Birley says, “but that is completely untrue. If Canada can fix its relationship with the Indigenous people, then I think fundamental changes can happen.”

Another troubling pattern, one that has persisted throughout human history, is that the very existence of Deaf people is constantly called into question. An October 2019 story in Nature, an international scientific journal, highlights a Russian scientist who uses gene editing to alter, or “repair,” genes that cause deafness. Such stories frequently arise, as do stories about the latest innovations in hearing aids and cochlear implants that seek to correct, cure, or minimize deafness. It is tremendously difficult to assert one’s human rights when one’s right to exist is continuously undermined.

For many Deaf Canadians, a true home remains an imagined thing. It is something we explore and seek to create through our art and our language. Maryam Hafizirad, a Deaf Iranian visual artist who came to Canada in 2012, explores identity and selfhood through her magnificently colourful paintings. She speaks of the beauty of being Deaf; an ideal world, in her mind, “would allow Deaf people to fully express themselves however they choose.”

Every single Deaf artist I spoke to for this article agrees: self-determination is paramount. Our stories, paintings, sculptures, and performances offer glimpses of home, glowing pockets of rhythm and colour and intense fellow- feeling. Guaranteed legal protections, consistent funding, educational opportunities, and dedicatedly repaired relationships with the true custodians of this land can make those glimpses last.