On February 10, 2020, I was surprised to be tagged in a tweet that highlighted a Globe and Mail article titled, “The colour of criticism: How should media respond when an artist asks for only non-white critics to review them?” Rungh, an online space based in Vancouver, B.C., known for highlighting and amplifying IBPOC [Indigenous, Black, people of colour] voices since 1991, had tagged me along with others, tweeting they “commission[ed] reviews across Canada by IBPOC reviewers.” I have worked with Rungh in the past year when I profiled theatre artists Erum Khan and Tijiki Morris’s play, Patthar ki Zabaan, performed at Buddies in Bad Times Theatre as part of the 40th Rhubarb Festival.

The title made me uncomfortable and angry. It was telling me–and by extension all racialized reviewers–that our racialization was further made invisible as “non-white.” Looking closer at the article, I realized that the author, J. Kelly Nestruck, a cis white man, and the designated reviewer for Globe and Mail, had chosen the word, “non-white,” to replace “IBPOC.” The title of the essay was his response to Anishinaabe and South Asian playwright Yolanda Bonnell’s request, which read that “to encourage a deeper discussion of the work, we are inviting critiques or thoughts from IBPOC [Indigenous, Black, and People of Colour] folks only.” Bonnell’s request was supported by Theatre Passe Muraille’s Artistic Director, Marjorie Chan. It was an inspiration from Bonnell’s mentor, Kim Senklip Harvey, who is a Syilx, Tsilhqot’in, Ktunaxa, and Dakelh playwright. Bonnell had worked with Harvey on Harvey’s play, Kamloopa.  While no reviewers were invited to Kamloopa, “love letters” were solicited from Indigenous women. Bonnell was inspired to make a similar request because of the positivity and strength reflected in those love letters.

Nestruck’s title, and his choice as a white man to erase IBPOC and use “non-white,” speaks volumes. The “non-white” swallows IBPOC identities within a descriptor of whiteness. It further reveals a desire to gain control of a narrative that Nestruck seems to be unable to control. The narrative here is his apparent, and alleged, inability to review Bonnell’s play bug (now playing until Feb 22 at Theatre Passe Muraille in Toronto). The crux of Nestruck’s narrative lies in his opening sentences: “It’s a basic principle of mainstream cultural journalism that artists should not pick which critics review them. But should artists be allowed to choose which colour of critic reviews them?”

The “basic principle” that he refers to is the current status quo within mainstream cultural journalism. Taking only the example of Canada, and–to borrow Harvey’s term on Twitter, “non-IBPOC”–Canadian theatre reviewers hired and paid by “mainstream” outlets like Globe and Mail, Toronto Star, and so on, the status quo signals a lack of IBPOC reviewers not part of this mainstream. Not only does Nestruck ask to uphold the status quo, he also wonders out loud whether artists should be allowed which “colour” of critic reviews them. I wonder here, allowed by whom? And by bringing “colour” into the equation, Nestruck makes the conversation less about the politics of power (here, status quo), and more about the politics of race. In this question, he shifts the conversation from the whiteness of the mainstream media, to the racial background (indicated here by “[skin] colour”) of the requested reviewers.

It would be easy to blame Nestruck for his myopia, but he isn’t alone. On Feb 11, 2020, another essay titled, “Critics who aren’t Indigenous, Black or people of colour aren’t invited to ‘bug.’ Yolanda Bonnell explains why,” written by Karen Fricker–a white woman–for Toronto Star, seemed to be echoing Nestruck’s question, albeit in a more covert way. Again, Fricker’s essay seemed to centre not being invited to Bonnell’s play.

For context, in a follow-up conversation with Nestruck after Bonnell’s official statement (with her request) was released, Chan clearly states, “No one is banned,” indicating that any reviewer is welcome to come review the show if they so choose. Further, Bonnell clarifies her position in a Vice essay titled, “Why I am Asking White Critics Not to Review My Show” (February 14, 2020). But Bonnell’s response comes in the wake of the racism that haunts her, and by extension, Harvey, as a result of the shifting discourse online (sparked by Nestruck and Fricker’s articles).

This is important, this shifting of ideas, as it sets up the online public discussion in the form of racist comments, threats, and vitriol on Twitter. It is also important to note that neither Nestruck nor Fricker take responsibility, or try to shift the discourse to protect Indigenous women’s safety online, or otherwise. When openly challenged on Twitter by Harvey and members of Canadian literary world, Nestruck notably stayed silent, or offered a non-apology on the lines of “I am sorry you feel that way.” 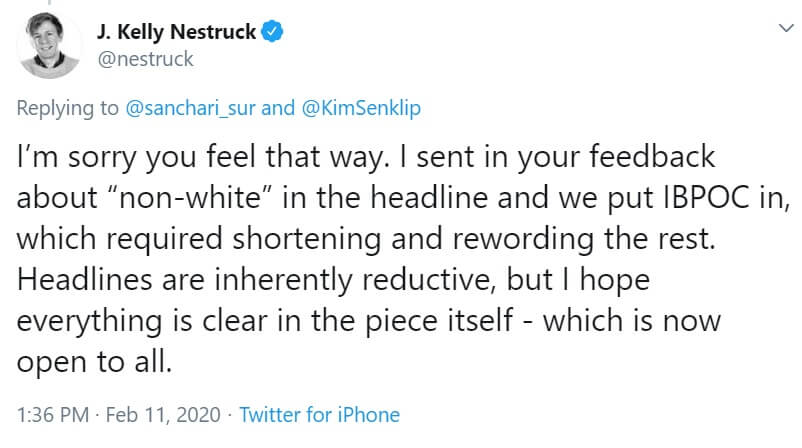 Nestruck acknowledges that the use of “non-white” may have been incorrect, and the Globe altered the title to use “IBPOC” on February 10, after much calling out on Twitter (disclosure: I played a part in this). But since the article was behind a paywall at that point, the change was only apparent in the title. On February 11, 2020, according to Nestruck, the Globe and Mail decided to remove the article from behind the paywall to reveal its new, adjusted title: “How should media respond when an artist limits reviews to critics who are Indigenous, black and people of colour?”

The choice to change “asks” to “limits” in the title is clear here. Through the change of one word, the title gives Bonnell more power than she has. What was initially Bonnell’s request in her “asks,” suddenly transformed into her demand, and even will, in the title’s “limits.” On being questioned on Twitter, Nestruck suggested that all titles are “reductive,” and thus, shouldn’t be given much attention. Instead, his intentions should be clear in his words within the article. Keeping this in mind, I want to look at Nestruck’s words a bit more closely. 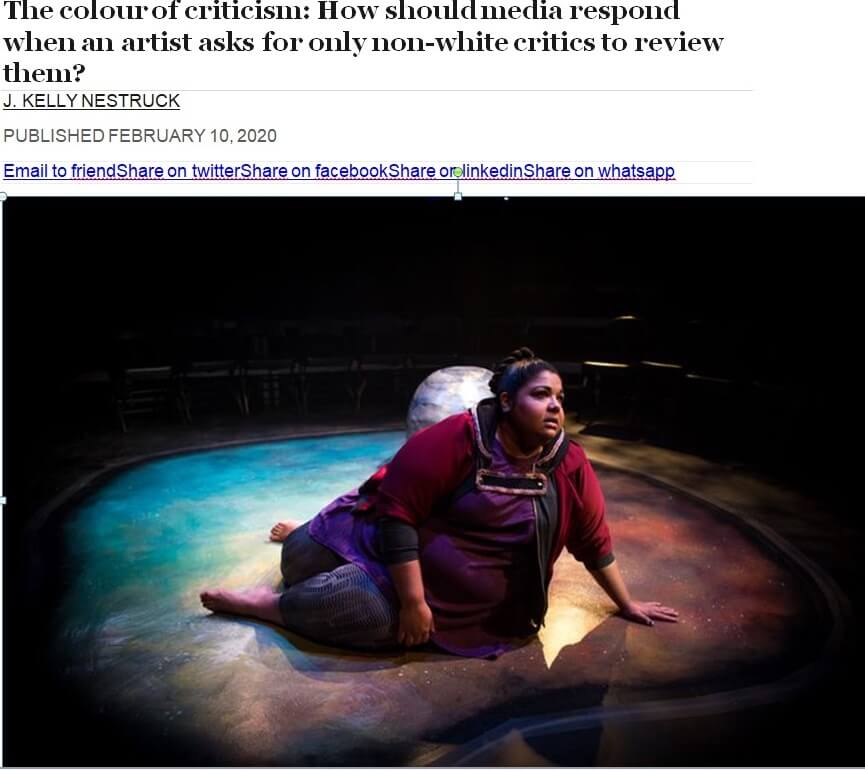 Nestruck framed Bonnell’s request as “a hot potato thrown to all Toronto newspapers, magazines, and online outlets.” Yet, to suggest that Nestruck is unaware of his position as a white critic paid to review theatre for Globe and Mail, would be wrong. He states: “It would be much easier to be outraged at my non-invitation to Bonnell’s opening night, of course, if I could name a single Indigenous theatre critic regularly working in Toronto…Or if I wasn’t aware that there is, indeed, a long history of white critics making racist, sexist and homophobic comments.”

But outraged he seems to be. If Nestruck was aware, then why the “outrage” over not being explicitly invited to review Bonnell’s play? He further clarifies, “I also can’t deny that my ‘white settler lens’ shapes how I experience theatre… And, of course, that lens can distort.” He gives an example of a 2008 “dismissive” review that he wrote of “the first all-Indigenous performances of Shakespeare, a Native Earth Performing Arts adaptation of Julius Caesar called Death of a Chief.” And yet, he signifies his anger at being allegedly disallowed from reviewing an Indigenous South Asian person’s work by making an issue out of what should have been a simple request.

In her VICE essay, Bonnell states, “To be clear, white people are welcome to attend the show. It’s important to have witnesses present to understand the ongoing effects of colonialism. And we are totally fine with a person of colour giving us a bad review. It’s not the review we’re worried about, it’s the voice behind it.” Her obligation to clarify herself again–despite her official statement to the media earlier, as well as her follow-up phone conversation with Nestruck after the statement was sent to all media–points to the intentional misunderstanding of what Bonnell actually meant. Not only is this misunderstanding perpetuated by critics like Nestruck and Fricker through their writing, but these critics also refuse to accept the role they have played in inciting racism online towards young Indigenous women like Bonnell and Harvey, and the impact of this racism on their well-being.

Instead of focusing on the merits of such a request, Nestruck contextualizes his irritation in the laying off of theatre critics in the past decade, such as by the National Post and the Toronto Sun. He uses Chan’s explanation on the lack of correlation between ticket sales and reviews to highlight what he believes to be the real “hot potato.” He brings the attention back to the discourse of “colour” by asking: “If even good reviews have less value at the box office, why trade a complimentary ticket or two for the risk of getting a bad (negative or ignorant) review?”

This question is an implication; an insinuation of sorts. Is he suggesting that only “mainstream” reviewers like himself are capable of “good” (and by extension, unbiased) reviews? Or that, if IBPOC reviewers were given these complimentary tickets, they would be overcome with gratitude, and as a result, feel an obligation to give “good” reviews? As a person of colour who regularly reviews creative work in different arenas for Canadian literary magazines, and spaces like Rungh, I find his question both presumptuous and appalling. For Nestruck to suggest that if IBPOC reviewers were to review these plays, then they would be automatically giving positive reviews points to a problematic kind of thinking; the kind of thinking Bonnell wanted to sidestep. Nestruck seems to suggest that IBPOC folks are incapable of being impartial reviewers in their own rights, and would be willing to give up their honest judgement and sell-out for free tickets. This, he seems to believe, is the real hot potato, one he can only couch behind suggestion and implication.

Not only is this belief rooted in the myopia of white supremacy and colonial discourse, but as Bonnell suggests in her essay, the response by the media (and online trolls) to her request cannot be isolated from the larger discourse of Justin Trudeau’s government and the Wet’suwet’en land defenders. Power is being taken back by IBPOC folks, and the white colonialist status quo is being challenged on a national level.

What’s more, the fear of losing power is so strong, so palpable, that Nestruck followed up his original article with another on February 16, 2020 titled, “A Cree professor and a white critic went to Yolanda Bonnell’s bug. Then, they discussed.” The co-authoured article is a conversation between Cree professor at the University of Toronto, Karyn Recollet, and Nestruck. If this is Nestruck’s way of making good, then he fails.

Why does he, as a white man, feel the need to insert himself into a conversation that can do without him at all? I believe that is the real hot potato.

Correction: a previous version of this post referred to the article by Karyn Recollet and J. Kelly Nestruck as an interview. It is a discussion between the aforementioned, who share a byline on the piece.